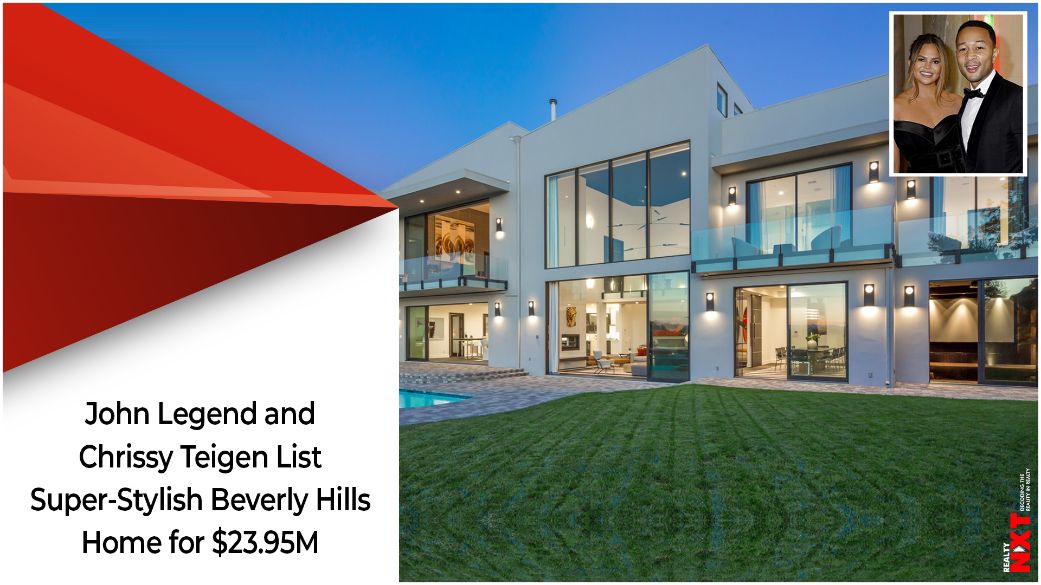 The couple have been sheltering in place during the pandemic in this stunning space, according to the Wall Street Journal.

John Legend appeared at the piano looking right at home for the final night of the Democratic National Convention on Thursday. Meanwhile, he and his model wife, Chrissy Teigen, have placed their photogenic mansion in Beverly Hills, CA, on the market for $23.95 million.

The couple have been sheltering in place during the pandemic in this stunning space, according to the Wall Street Journal.

But with a third child on the way, the family, which includes Teigen’s mother, are about to move on, the WSJ notes.

They bought the contemporary residence—formerly owned by Rihanna—in 2016, for $14.1 million. Old listing photos show the interiors to be a minimalist stark white. Legend and Teigen tapped their long-time designer, Don Stewart, to “reimagine it,” according to the WSJ.

Spread over 8,250 square feet, the seven-bedroom floor plan begins with a dramatic entry. Ceilings of 33-feet and a sculptural staircase greet you as you walk in.

The state-of-the art kitchen is the backdrop for many of Teigen’s cooking videos, and includes three ovens, two stovetops, and an island perfect for presenting tutorials.

All seven bedrooms include their own balconies and en suite baths. The opulent master bedroom features a fireplace with a large balcony, as well as a jaw-dropping glam room and dressing rooms.

Outdoors, the grounds include a saltwater pool and hot tub, a wood-burning oven and chef’s grill, plus a pergola, and canyon views “reminiscent of Tuscany,” the listing notes. The layout also includes a plush home theater and a huge gym.

The couple have a taste for high-end real estate on both coasts. In New York City, they let go of a two-bedroom Broome Street loft in 2016 that had been listed for $4 million.

They returned to the neighborhood in 2018, to purchase a $9 million penthouse with room for their growing family. The 2,600-square-foot condo features a landscaped terrace with an outdoor kitchen.

Earlier this year, the talented twosome expanded their real estate empire by purchasing a second Nolita penthouse, next door to the one they already own, for a hair under $8 million. The more than 3,500 square feet of living space include three floors and three bedrooms, a projection room, a great room, and a 1,500-square-foot roof terrace with New York City views and an outdoor kitchen.

Before their current Beverly Hills home, the two owned a midcentury Hollywood Hills home featured both in Architectural Digest and in the TV series “Oprah’s Next Chapter.” That home sold in 2014 for $2 million.

Legend is one of only 15 EGOT artists, having won an Emmy, Grammy, Oscar, and Tony over the course of his illustrious career. The multitalented Teigen is hosting a show on Quibi, has published two popular cookbooks, and maintains a massive following on Instagram.