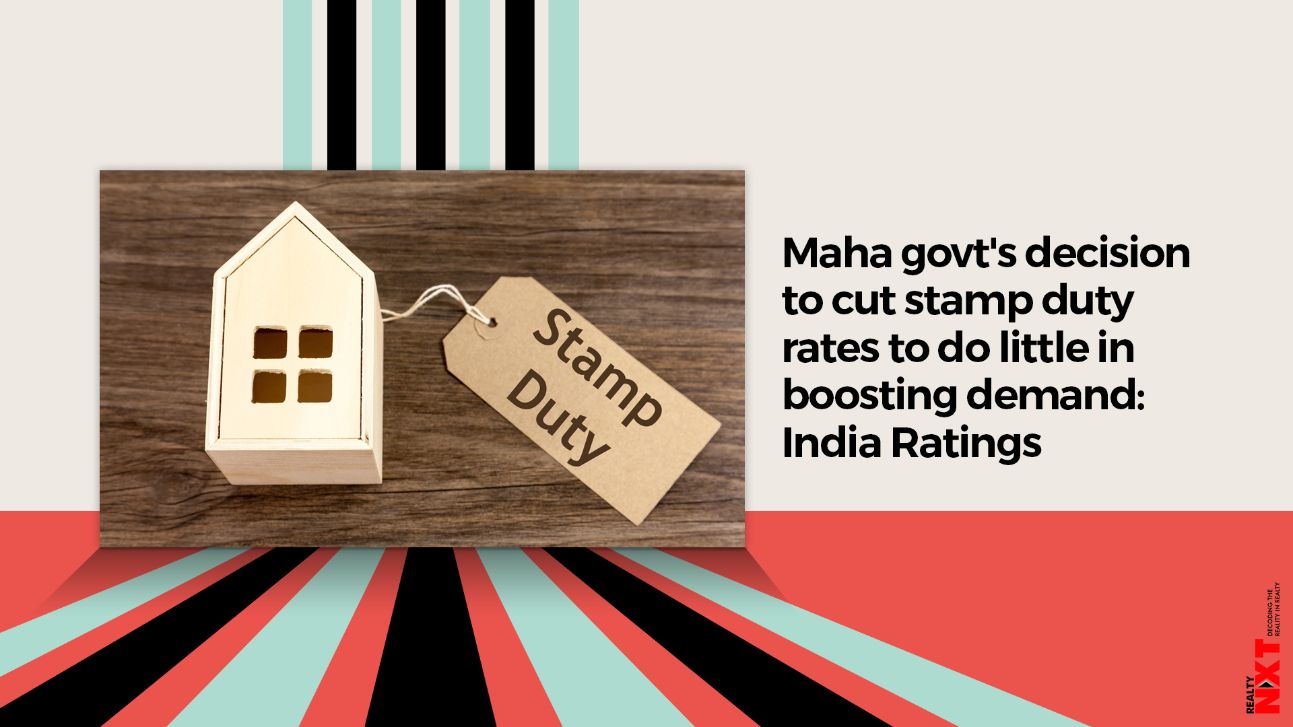 The state government on Wednesday announced to cut stamp duty to 2 per cent from the current 5 per cent for three months from September to December 2020 and thereafter to 3 per cent between January 1 and March 31, 2021.

The Maharashtra government’s decision to slash the stamp duty rates for a limited period is unlikely to revive the sluggish real estate sector, according to India Ratings.

The state government on Wednesday announced to cut stamp duty to 2 per cent from the current 5 per cent for three months from September to December 2020 and thereafter to 3 per cent between January 1 and March 31, 2021.

“The sector has been facing a slowdown for the past few years which has been exacerbated by the COVID-19-led nationwide lockdown. The proposed stamp duty reduction would do little to boost demand in the sluggish residential real estate market,” the agency said.

According to the rating agency, the residential real estate”s volume and price growth are closely integrated with the GDP growth rate. It added that the primary reason for such close interlinkages is that incomes have to be not only accumulated to buy a house but also sustained to create long-term assets such as real estate.

“Hence, economic prospects for a longer duration are of utmost importance while committing to such an asset class.

“Given that India”s GDP growth rate has been sagging and is likely to witness historic lows in FY21, it is highly unlikely that temporary measures such as one-time reduction in stamp duty for a limited period will revive confidence in the real estate markets,” it said.

Further, income slowdown amid levered households” balance sheets might only intensify the slowdown in the residential real estate in the near term.

The agency, however, noted that the two key residential real estate markets of Maharashtra — Mumbai Metropolitan Region (MMR) and Pune — may react differently to this measure, given the structural difference between these two markets.

“MMR and Pune have seen a decline in weighted average prices across ticket sizes at a CAGR (compound annual growth rate) of 3 per cent and 0.5 per cent, respectively, while all-India prices increased about 1 per cent during FY16-FY20,” it noted.

The rating ageny added that the declines have been sharper in the high-ticket category. “Thus, anticipation of a further decline in prices may offset the benefits offered by temporary reduction in stamp duty.”

MMR has almost 75 per cent of its inventory in ticket size upwards of Rs 50 lakh and may thus require a little more than stamp duty reduction to encourage prospective buyers.

On the other hand, Pune has equal split between Rs 50 lakh and upwards and Rs 50 lakh and below ticket size and thus, lower ticket sizes may still see some uptick, it said. The agency added that the capital values in that segment have remained more or less stable.