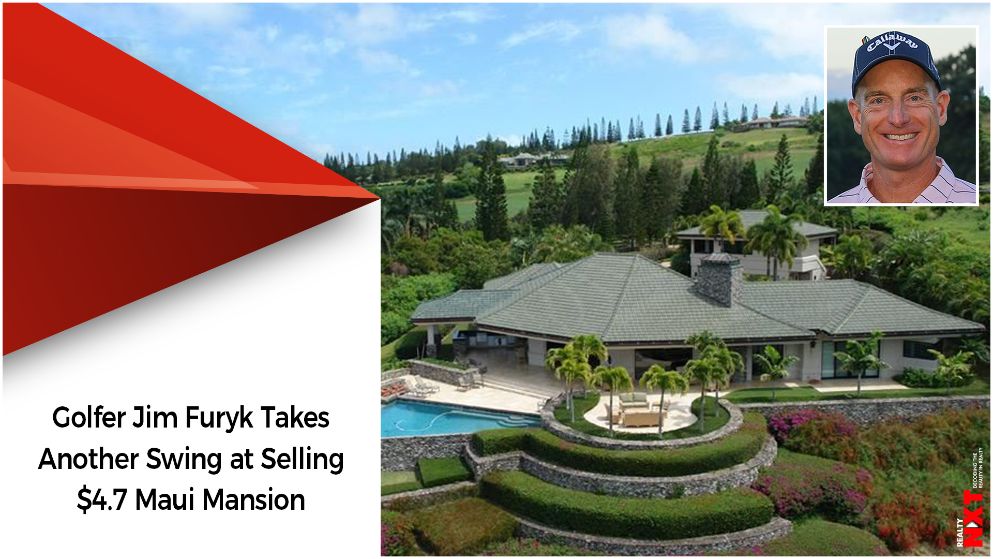 The spectacular island getaway has come on and off the market for over a decade, with an asking price of as much as $7.5 million back in 2008

Pro golfer Jim Furyk is taking another swing at selling his lovely home in Lahaina, HI. The Maui mansion is available for $4.7 million.

The spectacular island getaway has come on and off the market for over a decade, with an asking price of as much as $7.5 million back in 2008.

Even with the multiple price cuts, the golfer could still come out on top. Furyk, 50, bought the tropical property in 1999 for $940,000 and subsequently added a two-bedroom, two-bathroom guesthouse.

Set on 2.53 landscaped acres, the secluded retreat offers an infinity pool plus awe-inspiring views of Molokai and the Pacific Ocean.

The open floor plan offers two master suites, an open gourmet kitchen, a great room with living and dining areas, and an office. The interior has wood beams, walls of windows that open onto the outdoor patio, and a hand-laid rock fireplace.

The property also features an office, a workout room, and a seamless indoor-outdoor lifestyle. The outdoor space has a covered barbecue area and fireplace, plus a pool and spa.

Most of the rooms offer easy access to the outside, and the grounds include a motor court with a porte-cochère, as well as a three-car garage.

Given its owner, it’s not surprising that the home overlooks the fairways of the PGA championship Plantation Golf Course, also the site of Furyk’s victory at the Mercedes-Benz Championship in 2001. Born in Pennsylvania, he resides in Florida.

Furyk currently tees it up on the PGA Tour and the PGA Tour Champions. He’s won 17 PGA Tour events and has one major championship win—the 2003 U.S. Open. He also holds the record for the lowest round score in PGA Tour history, earning him the nickname “Mr. 58.”