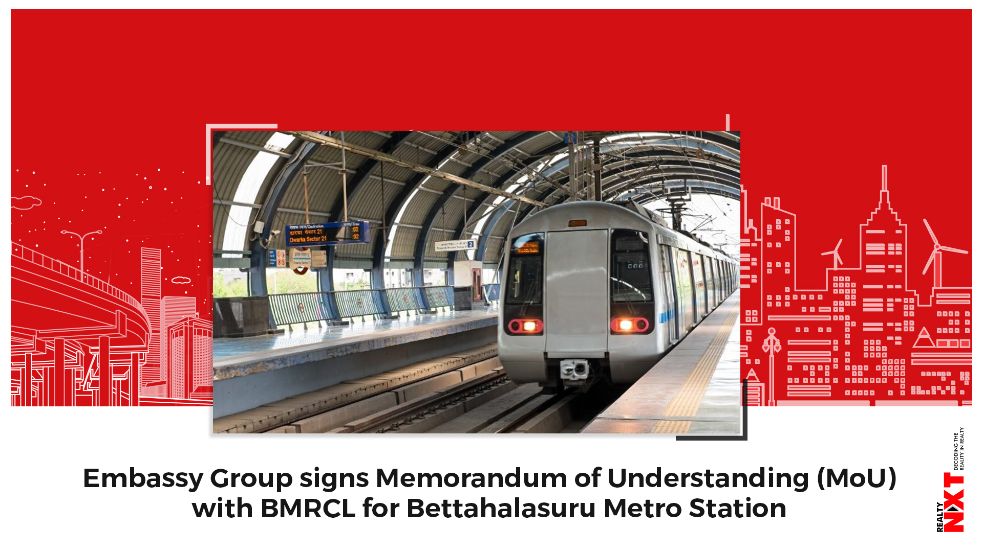 As part of the MoU, Embassy Group holds the complete authority to carry out interior design, fittings and other facilities at the metro station in consultation with BMRCL with an investment of approximately Rs. 7 crores.

The Embassy Group, one of India’s leading real estate developers, with the true spirit of its commitment for development of Bengaluru and joining hands for rapid and seamless connectivity to airport has signed an MoU with Bangalore Metro Rail Corporation Limited (BMRCL) for construction of Bettahalasuru Metro Station with a whopping investment of RS. 140 crores. The MoU was signed this afternoon, in the presence of Hon’ble Chief Minister Shri B. S. Yediyurappa marking another significant Public-Private Partnership (PPP) Agreement.

The proposed metro station will be a landmark station considering its location between Bagalur Cross and Trumpet Junction at Bettahalasur. It will be part of BMRCL’s proposed new line “ORR-Airport Metro” on Outer Ring Road from Central Silk Board to Hebbal via K R Puram and on NH 44 up to Trumpet Junction, finally connecting the Kempegowda International Airport to the city. The new line helps connect the IT hub with the airport for rapid transit.

The MoU states an initial concession period of 30 years from the date of commencement of commercial operations.

Following its MoU with BMRCL for construction of Embassy Boulevard – Bettahalasuru Metro Station signed on September 08, 2020, in addition to the metro station, keeping the interest of commuters and pedestrians in mind a 5-6 meters in width foot over bridge (FOB) walkaway will also be constructed underneath the metro Viaduct from the station concourse to the other side of the NH44 by BMRCL. As part of the MoU, Embassy Group holds the complete authority to carry out interior design, fittings and other facilities at the metro station in consultation with BMRCL with an investment of approximately Rs. 7 crores.

Embassy Group has been entitled to utilize 1000 sq feet of wall space in the station premises for branding and advertising activities and an exclusive 3000 sq ft area for commercial development that may include retail stores, food, beverage and other kiosks.

With this, Embassy Group’s investment in Bengaluru’s Urban Infrastructure is Rs 450 Crores towards two Metro stations at Kadubeesanahalli and Bettahalasuru, a skywalk and a flyover between the Thanisandra and Nagwara Lake junction.

Commenting on the signing of the agreement with BMRCL, Mr. Aditya Virwani, Chief Operating Officer, Embassy Group said, “We, at Embassy Group, are committed to contribute our efforts and financial investments towards improving Bengaluru’s urban infrastructure, in the welfare of our citizens. Namma Metro is among the finest Infrastructure projects in the city, planned to help decongest traffic for thousands of commuters each day and encourage office- goers across the city to embrace public transportation. This metro station will ease the traffic situation on the Outer Ring Road, leading to the International Airport. We are very happy to associate with BMRCL for this second Metro project and look forward to continue supporting the creation of world-class public transportation in Bengaluru”

Speaking on the Embassy Group collaboration with BMRCL Mr. Ajay Seth, Managing Director, BMRCL “This station is extremely important as North Bangalore is evolving as the city’s new central business district. This area of Bengaluru witnesses thousands of people travelling daily to work, Airport and considering traffic situations in parts of the city like the Airport road during peak hours, we expect this new route to ease traffic woes along this busy corridor and provide an alternative solution to a large number of private vehicles. We are grateful to Embassy Group for coming forth with their support towards building a Bettahalasur station”