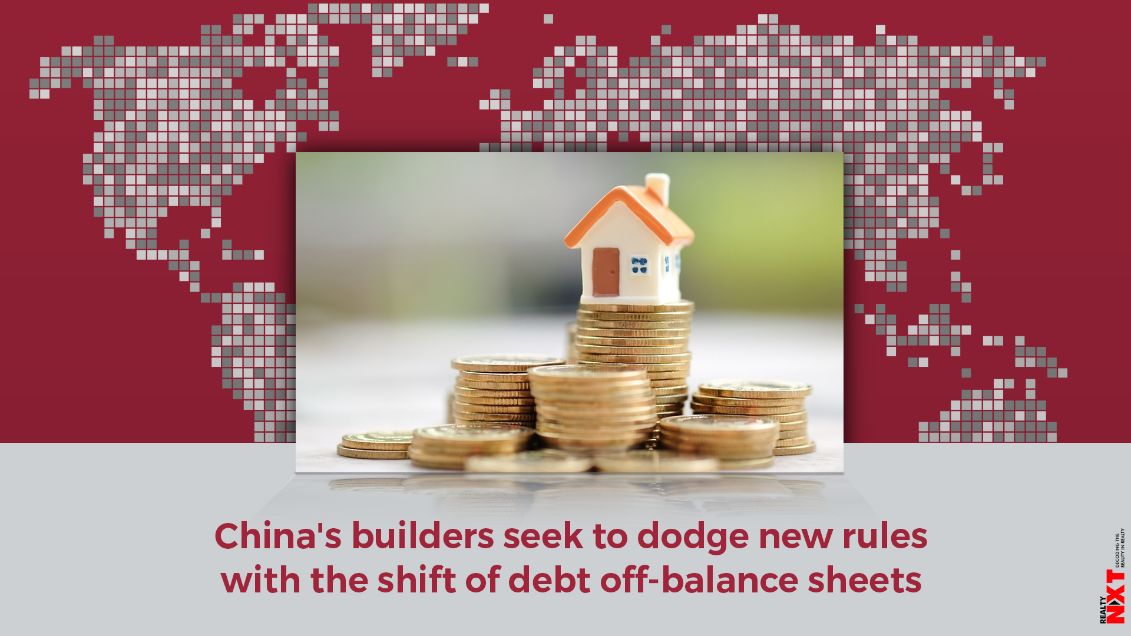 The move has sent shock waves through the industry, sources at four Chinese property developers told.

China is tackling unbridled borrowing in the real estate development sector anew with caps for debt ratios. But sources at developers say a rush to get around the rules by moving more debt off balance sheets is on.

Dubbed “the three red lines”, Chinese regulators outlined caps for debt-to-cash, debt-to-assets and debt-to-equity ratios last month at a meeting with 12 major property developers in Beijing. Though not yet officially announced, developers expect the rules to be applied sector-wide as soon as Jan. 1, 2021.

The move has sent shock waves through the industry, sources at four Chinese property developers told.

“Liquidity is still abundant, both onshore and offshore, you just need more innovation in fund raising.”

Moving debt off books by setting up ventures with other developers to purchase land is already common practice and will intensify, said the sources, declining to be identified due to the sensitivity of the matter.

Other methods that effectively disguise debt as equity – such as investing in a project with a financial entity which gets guaranteed returns and an agreement for their stake to be bought back – will continue to gain in popularity, the sources added.

But regulators have been loud and clear in their messaging and will likely step up countermeasures to rein in projects aimed at hiding debt, analysts and economists say.

Regulators have since 2016 sought to limit lending to the sector, including by trust funds and other parts of China’s shadow banking industry. They have also sent developers with many joint ventures questionnaires asking them to account for their business practices.

“I can’t say this loophole has been completely sealed but for sure the room to manoeuvre is not as big as before. The same applies to disguising debt as equity – so unless there are new methods that regulators are unaware of, it’ll be hard to do in large volumes,” said Rosealea Yao, China investment analyst at Gavekal Dragonomics.

China’s property market was among the first to recover after the coronavirus-hit economy reopened this year, thanks to cheaper credit and the relaxation of urban residential curbs. Supported by robust sales, real estate investment in the country climbed 11.8% in August, the fastest pace in 16 months.

The People’s Bank of China and the Ministry of Housing and Urban-Rural Development did not respond to requests for comment.

If developers are successful in shifting more debt off balance sheets, it will make the task of assessing the magnitude of the debt problem across the industry even more difficult.

The property sector in general accounted for 28.7% of the $24.4 trillion outstanding yuan loans issued by China’s banks in the second quarter – just under 2019’s peak of 29%. Real estate development loans totalled $1.8 trillion. Those figures, however, do not include financing offered by the country’s much larger shadow banking industry.

Not all developers are highly leveraged – China Vanke Co Ltd , the nation’s No. 3 developer – is known for its low debt ratios.

China Evergrande Group , China’s second-biggest, is the most indebted with some 835.5 billion yuan ($124 billion) in borrowings. It said at an earnings briefing last month, however, it had begun to cut its gearing even before the three red line policy.

The company which rarely joins hands with other developers, has slowed land purchases, sold a stake in a property management firm ahead of a possible IPO for the unit and is considering spinning off other units.

Country Garden Holdings , China’s No. 1 developer, told an earnings call last month it did not expect the new rules to pose a problem as its net debt ratio was 58% and its cash to short-term debt was 1.9 times.

S&P Global analyst Ricky Tsang says developers rated single-B by the credit agency would be most affected by the new policy as many of them would breach at least one red line.

S&P estimates that on average developers will need to limit growth in annual debt to around 15% to avoid a red line. By comparison, consultancy PwC estimates leverage ratios in the sector grew 20-35% on average over the last five years, with the biggest developers’ ratios growing the fastest.