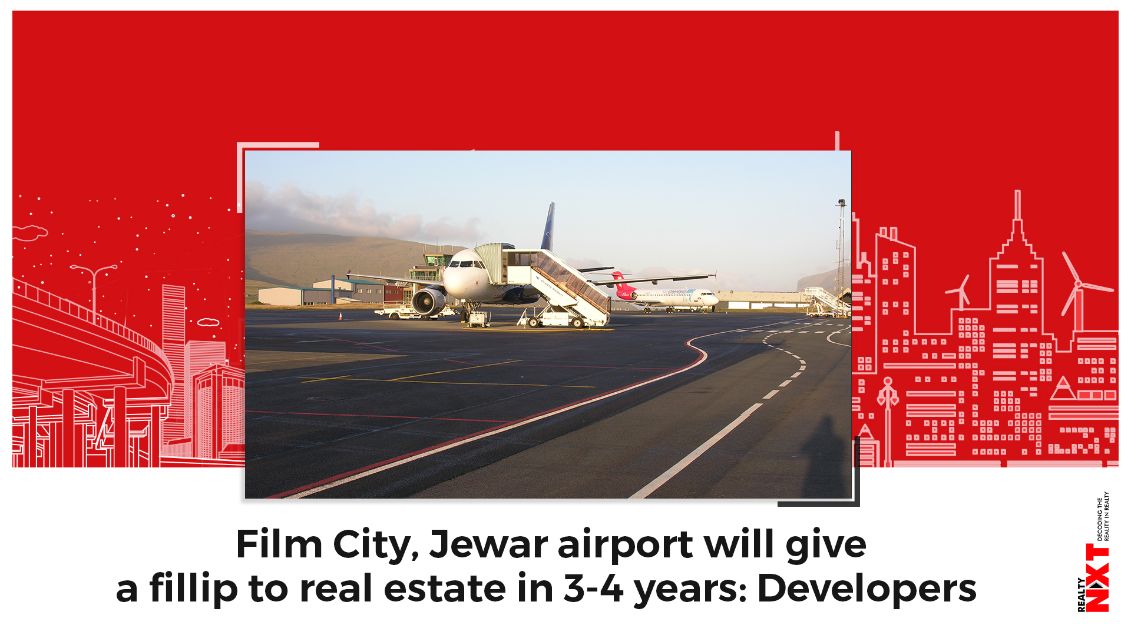 Earlier this week, the UP government gave its nod to a proposal from the Yamuna Expressway Industrial Development Authority (YEIDA) for setting up the film city in an area of 1,000 acre in its Sector 21.

The setting up of a Film City along the Yamuna Expressway in western Uttar Pradesh along with the proposed airport in Jewar will give a fillip to the real estate sector in 3-4 years, developers said Thursday.

Earlier this week, the UP government gave its nod to a proposal from the Yamuna Expressway Industrial Development Authority (YEIDA) for setting up the film city in an area of 1,000 acre in its Sector 21.

The site near Greater Noida is around six kilometres away from the upcoming international greenfield airport and close to multiple road highways.

“This is great news for the region. Not only would a substantial number of jobs be created, it will also put this area on the tourism map. It will have a multiplier effect on a number of support industries,” CREDAI”s NCR Unit President Pankaj Bajaj told.

He added that real estate — residential, commercial and retail — is directly linked with the index of economic development of an area. “Coupled with the Jewar airport, this will definitely give a fillip to the sector in 3-4 years.”

Manoj Gaur, MD of Gaurs Group and chairman of the Affordable Housing Committee of CREDAI (National), said such major developments bring a lot of positive momentum in developments and investments.

Supertech Group Chairman R K Arora said the film city is expected to create large-scale job opportunities directly and indirectly, which would eliminate the present sluggishness in demand and property transactions due to the impact of COVID-19 and the lockdown.

“Once the entire infrastructure planned for the area is in place, this location would surpass major cities like Mumbai, Pune and Ahmedabad,” Arora said.

Bhutani Infra CEO Ashish Bhutani said the UP government”s move is going to be a “monumental step” in making the region of Noida the biggest entertainment and business hub of North India.

He said the project will be a catalyst in boosting the state”s economy and creating multitude of job opportunities, and also transforming the face and scale of real estate developments planned here.

“In addition to the announcement of this ambitious project, the UP government has also received over 50 investment proposals worth 7,000 crore from international investors,” Bhutani said.

He added that the investors include from countries such as Japan, the UK, the US, Canada, Germany and South Korea who are planning on shifting their base from China.

Amit Modi, director of ABA Corp and president of CREDAI Western UP, said any such initiative is bound to have a major “economic multiplier effect” on the local economy.

“It will not only attract the best talent involved in the filmmaking process, but also millions of support staff and workers, who will be looking for accommodation in the region,” he said.

He added that it will have a huge impact in both owned, rental, office and commercial real estate in the regions where national production houses will also be opening there satellite offices to support the film making process. “It is indeed a welcome step and will open gates of opportunities for the regional real estate market.”

“This bodes well for the real estate sector and it is likely to have a positive impact on demand for both residential as well as commercial properties,” he said.

Agarwala added that along with upcoming Jewar airport, the proposed Film City is expected to provide a new lease of life to existing projects and will boost new project offerings immensely.

Saya Homes Chairman and Managing Director Vikas Bhasin said that in the last 10-15 years, Noida and Greater Noida have come a long way mainly due to rapid infrastructure development.

“The upcoming Jewar Airport and the proposed Film City is likely to have a similar impact on the prospect of Yamuna Expressway, Noida and Greater Noida,” he added.

Gulshan Homz Director Deepak Kapoor said Noida will emerge as the most-robust luxury real estate destination as people working in Bollywood would look for real estate spaces that can meet their standards and, thus, projects with niche offerings will fetch good rewards.

He added that not only the Yamuna Expressway but the whole Noida region will benefit from this announcement. “We foresee a massive appreciation in property prices within a radius of 50 km from the proposed film city. The demand for customised penthouses, villas, and farmhouses in the region will go up. The wellness home concept will also witness a considerable upsurge in demand.”

Omaxe Ltd CEO Mohit Goel said airports everywhere have been instrumental in spurring demand for commercial spaces in and around its vicinity and with the upcoming Jewar airport, the demand has heightened in Greater Noida and Noida alike.

“However, with rentals in Greater Noida being 20-30 per cent lower than Noida currently, the big infrastructure projects have encouraged industries and IT companies to gradually increasing their presence in this part of the NCR owing to its long-term prospects,” he said.

Goel added that as a result, in the coming years, commercial properties in Greater Noida will witness a massive surge in both capital and rentals.

Ace Group CMD Ajay Chaudhary said the decision will boost the economy and real estate in and around the area.

“Apart from that, it will generate lakhs of jobs in the region. We are very much enthusiastic to see the world class property in this belt,” he said.