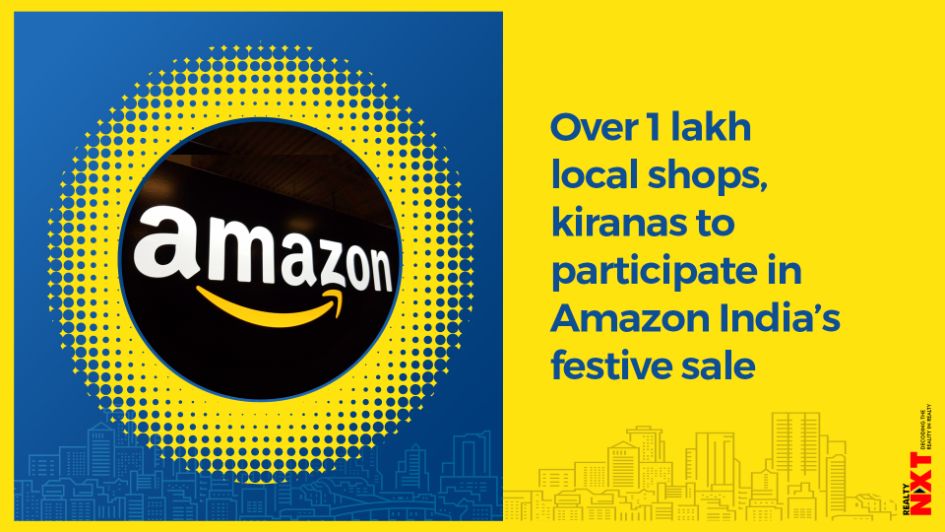 The programme, which was launched in April this year, now has more than 20,000 retailers in 400 cities, including Meerut, Ludhiana, Saharanpur, Surat, Indore, Ernakulum and Kanchipuram.

Amazon India on Sunday said it has enabled over one lakh local shops, kiranas and neighbourhood stores across the country through its various initiatives, a move that will help serve more customers this festive season.

This format helps shop owners establish a digital presence and expand their reach, while allowing customers to shop from local stores in their city.

The programme, which was launched in April this year, now has more than 20,000 retailers in 400 cities, including Meerut, Ludhiana, Saharanpur, Surat, Indore, Ernakulum and Kanchipuram. More than 40 per cent of the sellers are coming from outside the top 10 cities.

Amazon India’s other programmes include Amazon Easy stores, ‘‘I Have Space’‘ and Amazon Pay Smart Store. “This festive season, we are focused on helping our sellers and other MSME partners grow their business and bounce back from the recent challenges. In the last few months we have seen businesses of all sizes increasingly adopt technology into their business,” Amazon India Vice-President Manish Tiwary said.

The integration of Amazon’s programmes with one lakh-plus ubiquitous neighbourhood stores – for selling online, to help customers buy online, to make deliveries and enable contactless payments – is a testament of the adaptability and inventiveness of Indian entrepreneurs, he added.

Recently, Walmart-owned Flipkart had said it has onboarded more than 50,000 kirana shops to strengthen its supply chain and delivery capabilities ahead of the upcoming festive season.

With this, Flipkart has significantly expanded its kirana onboarding programme to make deliveries to customers in more than 850 cities, it had said.

E-commerce companies see a large chunk of their business coming in during the festive sales and they make significant investments ahead of time to ramp up their capacity to be able to handle the spike in orders. Festive season sees players holding multiple sale events, timed around Dussehra and Diwali.

Electronics, fashion and home furnishing are some of the categories that see a huge demand during the festive season. A report by RedSeer estimates that festive sales this year are expected to almost double and touch USD 7 billion in gross merchandise value (GMV) as compared to USD 3.8 billion in the same period last year.

Walmart-owned Flipkart will host its annual ‘‘The Big Billion Days’‘ sale from October 16-21, while Amazon.in is expected to announce its sale dates next week. Value-focussed e-commerce marketplace Snapdeal will hold its first sale in mid-October to coincide with Navratri festivities. Its next two sales will run in late October and early November.

Amazon India – in its statement – said it has over 50,000 Amazon Easy stores across the country, which provides assisted shopping for ‘‘new to e-commerce’‘ customers. Under this model, Amazon works with several network partners across India and trains store owners to help customers find and buy products from Amazon.in, while enabling additional revenue streams for entrepreneurs and businesses.

Talking about its Amazon Pay Smart Store format, it said the initiative is currently enabling more than 15,000 neighbourhood shops to provide a contactless shopping experience to their customers.

With Amazon Pay Smart Store, customers can scan the store’s QR code using the Amazon app to explore the products available in the store. After selecting the products they wish to buy they can check out with Amazon Pay, which gives them a choice of using UPI, balance, or credit or debit cards. This is available in over 25 cities including Coimbatore, Mysore, Siliguri, Mumbai and Delhi.

Amazon India said it has strengthened its flagship ‘‘I Have Space’‘ (IHS) delivery programme ahead of the festive season. It now comprises more than 28,000 neighbourhood and kirana stores in close to 350 cities.

Under the IHS programme, Amazon India partners with local store owners to deliver products to customers within a 2-4 kilometres radius of their store, allowing them to supplement their regular income and generate more footfalls in their stores.