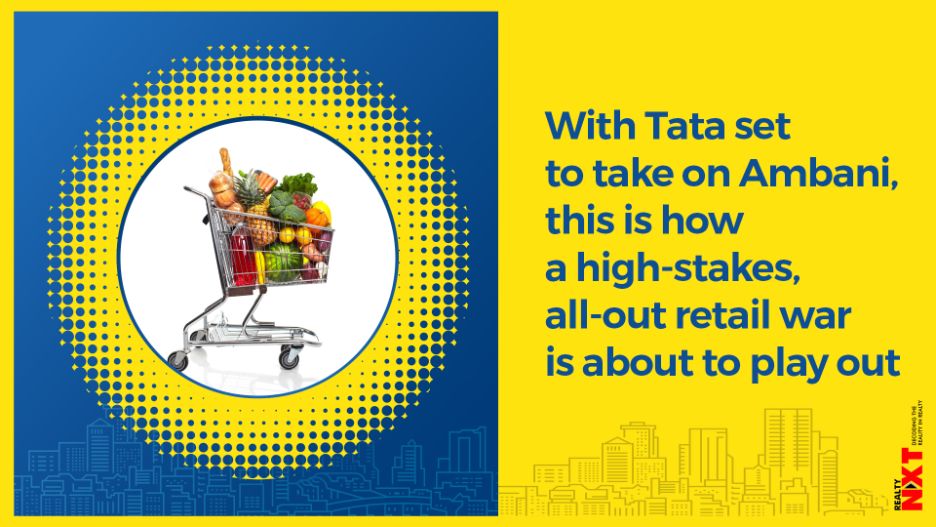 Tata has a stronger pedigree than Ambani in running consumer businesses, though some of its ventures — like the world’s cheapest car — have flopped.

Just as the Chinese duo of Jack Ma and Pony Ma have carved up major chunks of their country’s internet businesses, the battle for control of 1.3 billion Indians’ data could become a two-horse race.

The contest would get under way if, as reported by Bloomberg News, Tata Sons Pvt. brings in financial or strategic investors. The holding company of the $113 billion coffee-to-cars conglomerate may be taking a leaf from the playbook of Mukesh Ambani, who has raised $20 billion this year from the likes of Facebook Inc., Alphabet Inc., Silver Lake Partners and others for his digital assets. Ambani, India’s richest tycoon, is now parceling out stakes in his retail venture, and may have sought out Amazon.com Inc.

The 152-year-old Tata Group is talking to Walmart Inc. for a $25 billion investment in a “super-app,” a multipurpose online platform combining fashion, lifestyle and electronics retail, food and grocery, insurance and financial services, as well as digital content and education, the Mint newspaper reported.

The advantage is with the 63-year-old Ambani, with roughly 40 crore regular subscribers for his 4G telecommunications network. He also has India’s largest retail chain. The kind of super-app that has succeeded in China and Southeast Asia requires a reason for customers to visit it regularly. Commerce is incidental. Jack Ma’s Alibaba Group Holding Ltd. has its popular Alipay wallet. Pony Ma’s Tencent Holdings Ltd. has WeChat, a messaging service, and WeChat Pay. In Southeast Asia, Grab built a steady user base as a ride-hailing platform before branching into financial services.

But if Ambani wants to spawn India’s Tencent, Ratan Tata, 82, can aim to launch its Alibaba. The conglomerate, which owns Tetley tea and Jaguar Land Rover car brands, has its tentacles in more than 100 businesses, all with their supply chains. If Tata can provide a portal to its vendors to sell their wares, host data and discount bills, expansion into business-to-consumer or consumer-to-consumer websites — like Alibaba’s Tmall or Taobao — shouldn’t be too hard. Besides, if Walmart comes on board, Tata may get access to both the US retailer’s India e-commerce website Flipkart, which it bought for $16 billion, as well as PhonePe, a payment service.

Tata has a stronger pedigree than Ambani in running consumer businesses, though some of its ventures — like the world’s cheapest car — have flopped. The group also underestimated the challenge from Ambani’s Jio 4G network and was forced to offload its mobile service business. It’s a 51% partner in a low-cost domestic airline, though India’s aviation minister has said publicly that the unit is close to shutting shop. To prevent that, Ratan Tata may also have to buy out Malaysian entrepreneur Tony Fernandes’s AirAsia Group Bhd., the 49% partner.

Aviation will require further investment if Tata acquires taxpayer-supported Air India Ltd., which a cash-strapped government is desperate to sell. The Tata Group was the carrier’s original owner before it was nationalized.

Ambani brought in outside equity to cut his flagship Reliance Industries Ltd.’s net debt to zero and lower its dependence on refining and petrochemicals, businesses that will struggle with global oversupply in the post-Covid demand funk. Tata has a net debt overhang of more than $20 billion in steel and automotive businesses. In addition, Ratan Tata needs billions of dollars to buy out the Shapoorji Pallonji Group, an 18.4% shareholder in the holding company.

Ever since the group patriarch ousted SP Group scion Cyrus Mistry as Tata Sons chairman four years ago, the two sides have been trapped in a messy legal feud. Now that SP’s liquidity crunch is forcing it to cash out, Tata must exercise its right of first refusal or bring in other investors, perhaps by tapping the group’s deep connections with Singapore’s sovereign wealth fund and its state investment firm.

So far, the Tata Group has held itself together by the glue of its software export business, which churns out cash without requiring much investment. However, with clients moving to cloud-hosted services, helping global companies maintain large applications on in-house servers is getting stale.

Tighter US visa restrictions will further shrink the scope for arbitraging the labour of cheap Indian code-writers. The Tata Group badly needs a new growth engine, and could find one in data.

But it needs to hurry up. Alphabet’s Google aims to build a cheap Android phone for Jio. Facebook’s WhatsApp messaging could handle payments for JioMart, a network of neighbourhood shops virtually connected to Jio subscribers. If Amazon does end up backing Ambani, and Walmart throws in with Tata, then corporate America would have broadly finished placing its bets on what could be the next big emerging-market online commerce story after China.

India certainly has scope for two super-apps. Since a majority of users will be accessing data on $50 smartphones with limited storage, any more than that may not be viable. All the more reason for Tata to make its moves quickly.