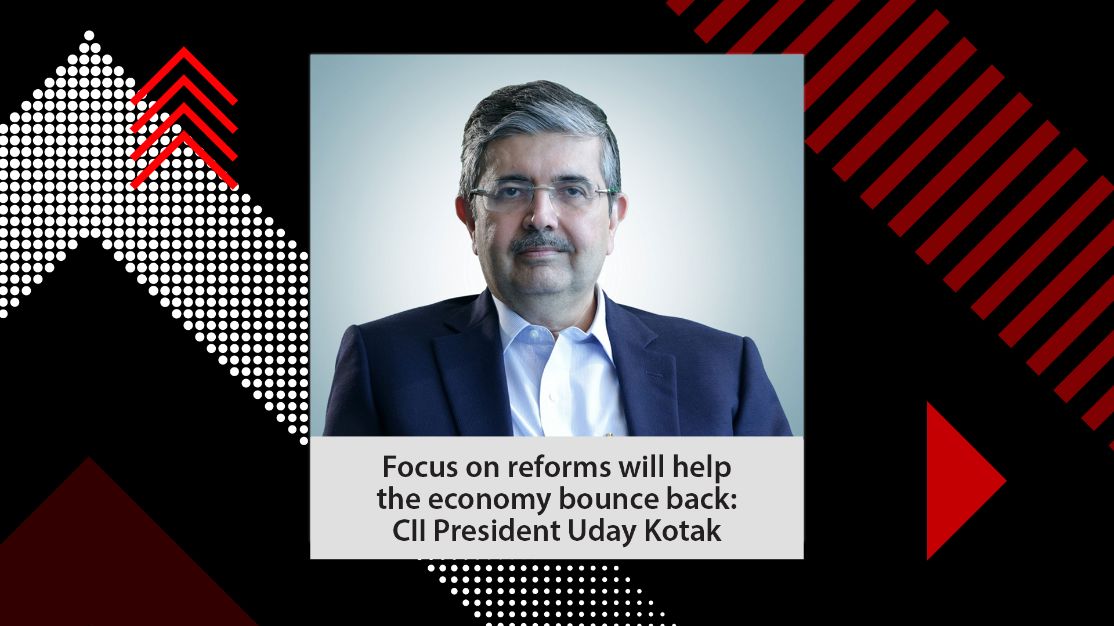 Talking about the state of the economy post the unlock phase, Kotak said there was now a big departure from the depressed mood that had gripped the industry during the early stages of lockdown.

Continued focus on reform measures ushered in by the government even as the country faces one of its toughest crises during the pandemic, will trigger a faster recovery of the economy with the industry reposing confidence of a bounce back sooner than expected, Confederation of Indian Industry (CII) president Uday Kotak said on Wednesday.

Talking about the state of the economy post the unlock phase, Kotak said there was now a big departure from the depressed mood that had gripped the industry during the early stages of lockdown.

“The industry now sees their sectors seeing a better pick up and capacity utilisation than what they had projected in March 2020. While in the first few weeks post the lockdown, the pickup was attributed to pent up demand, the sustenance of demand particularly in some non-essential sectors have lifted hopes of a faster recovery,” he said.

The CII president said that the determination by the government to meet the challenges by pushing through some long-pending reforms like the labour reforms and those for the farm sector apart from the call for an Atma Nirbhar Bharat have helped improve the confidence of the industry.

With the further easing of restrictions and successive unlocking of the economy initiated from June, most of the high frequency data points have shown a continued normalisation in activity levels, as compared to the multi-year lows seen in April.

“The robust performance of merchandise exports can be largely ascribed to the industrial units being able to function with greater capacity in September, as restrictions on mobility were eased and local lockdowns were fewer. Slowly improving global trade is also helping on the margin,” said Kotak.

The turning around of outbound shipments after a gap of six months with merchandise exports expanding by 5.27 per cent in September is amongst the many indicators which have recorded an impressive recovery.

The fewer localised lockdowns have also resulted in the industrial activity now moving into an expansion territory. On a sequential basis, manufacturing purchasing managers index (PMI), which is a widely tracked indicator of business activity jumped to 56.8 in September – a eight year high – from a low of 27.4 seen in April.

“This is indicative of the fact the manufacturing sector is slowly but steadily moving towards stabilization and portends well for the recovery prospects of the critical sector,” Kotak added.

The improvement has also been seen in services PMI, with the index value recuperating from a low of 2.0 in April 2020 to 49.8 in September. The improvement seen in domestic PMIs is broadly been in line with the recovery process seen in global PMIs as well.

A clutch of other indicators, too, mirrored the upturn noted in the manufacturing sector. The consumption of petroleum products in the first fortnight of September, grew by 2.0 per cent, indicating a positive trend reversal, which if sustained, will have a multiplier effect on the economy.

In addition, the growth in power consumption by 5.6 per cent in September, after a gap of 6 months, further lends credence to the fact that most of the industrial units are back in operations.

We are buoyed by the rebound in the GST collection to Rs 95.5 lakh crore for September, thus growing by 4 per cent on year-on-year basis after a gap of six months.

In addition, the growth in number of E-way bills, which too, staged a strong recovery rebounding from a decline of -3.5 per cent in August to +6.6 per cent growth in September, thus reflecting a growth in logistics, is heartening as well, he said.

Among the specific manufacturing sectors, significant improvement in construction equipment has been witnessed after poor performance in April.

The sales of passenger vehicles have also bounced back to record a year-on-year growth of 14.2 per cent in August, which might get a further boost due to the forthcoming festive season. The improvement in sales of construction equipment and passenger sales point towards recovery process in investment and consumption respectively which has been set in motion.

“This year, the agriculture sector has emerged as a beacon of hope for India’s economy, with a normal and largely well-distributed monsoon and record food-grains production cushioning the rebooting of the economy. A concerted action plan from the government to support the rural sector in the form of Agri-Infrastructure Fund and other key reforms in the sector have also supported the sector”, highlighted Kotak.

While agriculture does not have the heft to offset the sharp contraction in non-agricultural sector (accounting for 85 per cent of GDP), it punches more than its weight in GDP – its share in employment remains the highest at 44 per cent and is a critical supplier of much-needed nutrition during the pandemic. The high frequency indicators in the sector, such as fertiliser sales, tractor sales have all shown an improvement in September over the lows seen in April.

Specifically, the tractor industry is now producing at full capacity with bullish sentiment across villages. The tractor sales have recorded an impressive jump over the months, with August seeing a jump of 75 per cent from -79 per cent in April. However, the supply chain disruptions are still a cause for concern.

Despite Covid-19 inflicting deep pain in certain sub-sectors of services like tourism, hotels & hospitality, aviation among others, early signs from the sector are pointing towards resurgence in a few pockets.

For example, railway freight traffic improved 15 per cent in September, with further improvement expected in the subsequent months due to growth in movement of goods on the National Highways.

The latter also resulted in electronic toll collections picking up pace to Rs 17.1 billion in August 2020 from Rs 2.5 billion seen in April 2020.

“Though still early, these are indeed promising signs, pointing towards some semblance of a recovery process taking shape in the various sectors. Going forward, we expect economic activity to continue to normalise further in the coming months,” added Kotak.

Specifically, resilience in the rural economy, helped by a buoyant monsoon season and government spending coupled with an accommodative monetary policy environment is expected to cushion economic activity.

However, our expectation hinges on the fact that there will be no second wave of the pandemic in the ensuing months, he said.