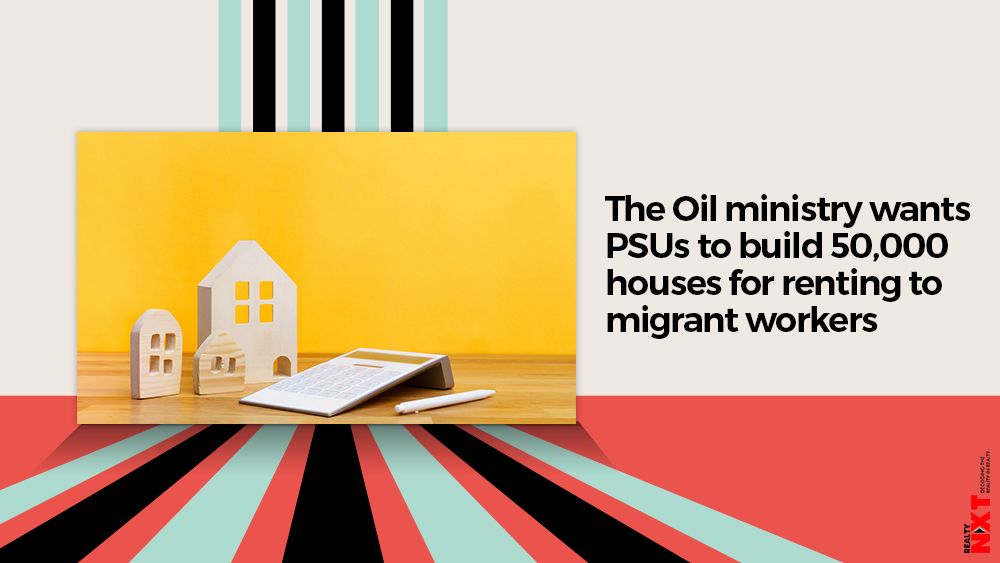 The petroleum ministry has asked oil PSUs such as Indian Oil Corp (IOC) to build 50,000 houses for renting to migrant workers as part of government plan to develop affordable rental housing after millions of labourers fled cities for villages amidst coronavirus lockdown.

The ministry wants IOC and other public sector undertakings (PSUs) under its administrative control such as Hindustan Petroleum Corp Ltd (HPCL), Bharat Petroleum Corp Ltd (BPCL), GAIL India Ltd and Oil and Natural Gas Corp (ONGC) to build the housing units on the land they have, three officials who attended a meeting on the subject said.

The meeting, they said, was chaired by Oil Minister Dharmendra Pradhan who asked the PSUs to come up with plans to build the housing units at the earliest.

The ministry had on October 5 tweeted about the meeting saying Pradhan “held a meeting with officials of MoPNG and PSUs to review the efforts made by PSUs in providing houses on rent to migrants and urban poor working on oil & gas projects under the affordable rental housing scheme of @MoHUA_India.”

“The Affordable Rental Housing Complexes, a sub-scheme of #PMAY aims to provide ease-of-living to urban poor and migrant workers in need of affordable housing near their work sites as a result of the #Covid19 induced reverse migration,” the ministry had tweeted without giving details.

Under diktat from the ministry, the PSUs have started looking for scarce land within or near their installations for the housing project, the officials said.

However, some of the PSUs officials found little merit in the move.

They said operating units such as refineries rarely have spare land and they often struggle to house new units or staff. Also, the new projects such as pipelines are in remote areas where migrant workers may not be willing to go and rent.

Those working on oil and gas projects are often housed in temporary housing units near the project sites and it may be difficult to get them into rented units, they said.

The government had in July approved a plan to develop affordable rental housing for migrant workers after millions of labourers fled cities for villages as the lockdown left many of them without jobs and homes.

The scheme, part of a housing project aimed at providing housing for all by 2022, was aimed at converting existing vacant government housing into affordable rental housing complexes (ARHC). Private developers could also participate.

The programme will benefit about 3,00,000 workers initially, according to the Ministry of Housing and Urban Affairs statement issued after the Cabinet approval of July.

The plan, announced initially in May as part of a coronavirus stimulus package and approved by the Cabinet in July, will offer subsidised loans, tax incentives and additional floor space allowances to developers.

No government agency has a database of the total number of migrant workers in India. The government had recently informed the Supreme Court that approximately 1 crore migrant workers had returned home in Shramik Special trains, buses and on foot since the lockdown began on March 25.