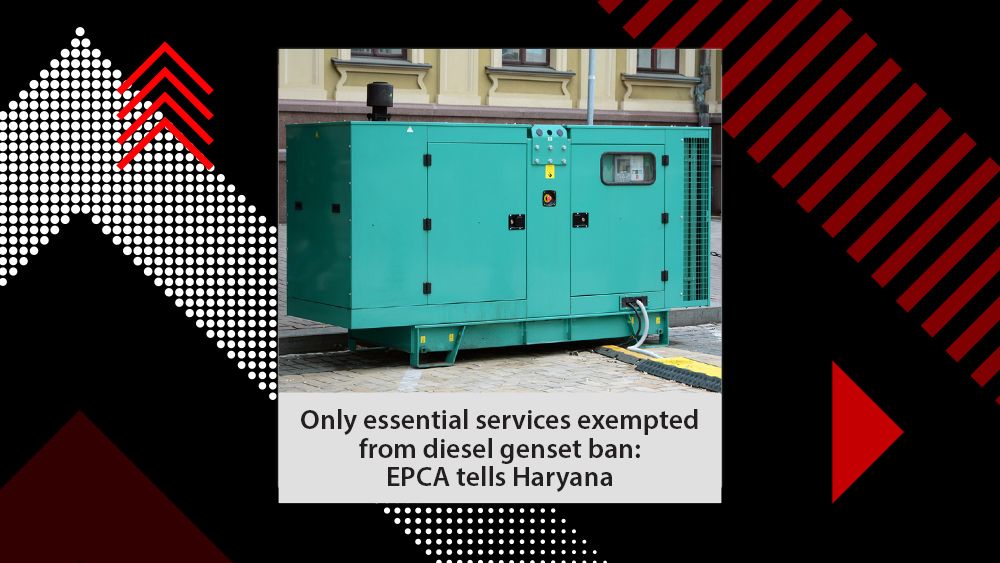 The measures under GRAP, which was first implemented in Delhi-NCR in 2017, include increasing bus and metro services, hiking parking fees and stopping use of diesel generator sets when the air quality turns poor.

The Supreme Court-mandated Environment Pollution (Prevention and Control) Authority on Tuesday told the Haryana government that only essential services will be exempted from the ban on diesel generator sets which comes into effect on Thursday.

The clarification was issued after the Haryana administration wrote to the EPCA, saying around 16,200 people in some residential complexes and condominiums in Gurgaon and Faridabad will be affected by the ban, as their developers or builders have not yet taken electricity connections.

The pollution watchdog’s head, Bhure Lal, said, “The EPCA is very clear that the Graded Response Action Plan (GRAP) will come into force from October 15… We are interested to know your preparedness to enforce GRAP, which includes banning DG (diesel generator) sets in residential, commercial and industrial areas. Only essential services are exempted.”

The measures under GRAP, which was first implemented in Delhi-NCR in 2017, include increasing bus and metro services, hiking parking fees and stopping use of diesel generator sets when the air quality turns poor.

The national capital’s air quality hit an eight-month low and was recorded just a notch shy of the “very poor” category on Tuesday, largely due to calm winds and low temperature that allowed accumulation of pollutants.

The city’s air quality index (AQI) hit “very poor” levels in the morning and stood at 306 at 11 am. Thereafter, the pollution levels dipped slightly due to an improvement in the ventilation index.

The 24-hour average AQI was recorded at 300 at 4 pm, which falls in the “poor” category. The last time the air quality hit such a poor level was on February 12 when the AQI was 320.

The measures to be followed in the “emergency” situation include stopping entry of trucks in Delhi, ban on construction activities and introduction of the odd-even car rationing scheme.

The EPCA had last week told the governments of Delhi, Haryana, Punjab, Uttar Pradesh and Rajasthan to “try and avert” the need to take emergency measures, such as a ban on construction and industries using fuels other than piped natural gas, as the economy is already under stress post-lockdown.