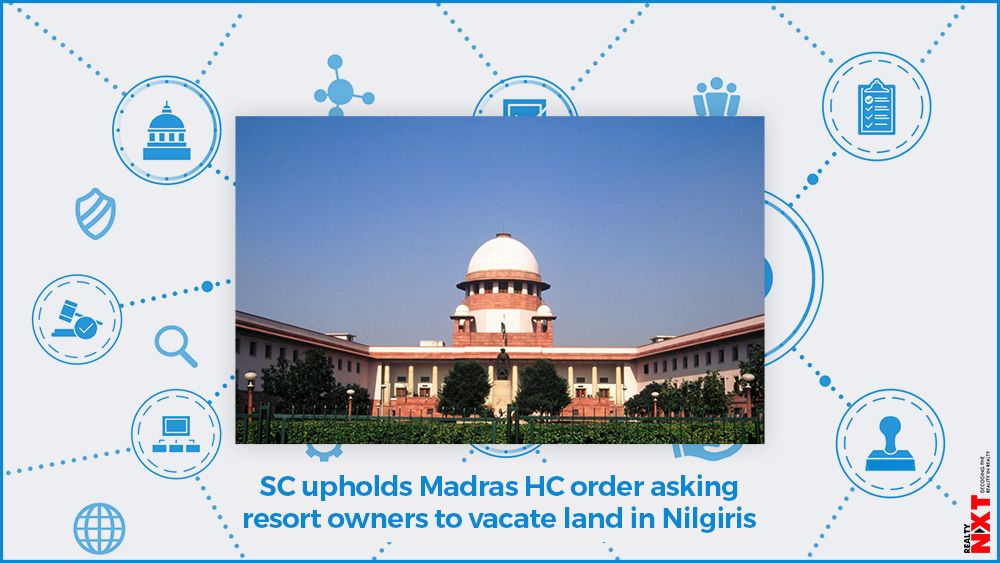 A bench comprising Chief Justice S A Bobde and Justices S Abdul Nazeer and Sanjiv Khanna delivered the verdict on 35 petitions including that of the Hospitality Association of Mudumalai and Chakraborty against the Madras High Court’s judgment.

The Supreme Court Wednesday upheld the Madras High Court’s 2011 decision asking resort owners including Bollywood actor Mithun Chakraborty and private landowners to vacate and hand over the possession of their land falling under the ‘elephant corridor’ to the District Collector of Nilgiris in Tamil Nadu.

A bench comprising Chief Justice S A Bobde and Justices S Abdul Nazeer and Sanjiv Khanna delivered the verdict on 35 petitions including that of the Hospitality Association of Mudumalai and Chakraborty against the Madras High Court’s judgment.

Writing for the bench, Justice Nazeer took note of objections of some resort owners and landowners with regard to variance in the acreage of the elephant corridor as notified by the impugned Government Order (GO) and the actions of acquisition taken by the District Collector of Nilgiris.

It said there has been an allegation of “substantial variance between the acreage recommended for acquisition by the Expert Committee Report and the acreage in the impugned GO” and appointed a three-member Inquiry Committee headed by Justice K Venkatraman, a former judge of the Madras High Court, to deal with grievances.

The top court, in its judgment, dealt with various aspects related to the existential crisis being faced by elephants and said, “despite being a figure of traditional cultural reverence, today the elephant species is severely threatened in India.”

“The crux of the problem is one that affects all wildlife in the country: land.

As India’s human population has grown exponentially in the past several decades, so has its demand for resources. At its essence, that demand boils down to the requirement for more land – for agriculture to grow more food and for construction of roads, dams, mines, railways, and housing. This demand for land has led to the degradation and fragmentation of the country’s forest cover,” it said.

The high court had upheld the validity of the Tamil Nadu Government Notification of 2010 which had notified an ‘Elephant Corridor’ in the Sigur Plateau of Nilgiris District and has further directed resort owners and other private landowners to vacate and hand over the vacant possession of the lands falling within the notified elephant corridor to the District Collector, Nilgiris.

Dealing with the objections of those opposed to the elephant corridor and its consequences, the top court said the constitutional provisions “give a clear mandate to the state to protect and improve the environment and to safeguard the forests and wildlife of the country.

“It is the duty of every citizen of India to protect and improve the natural environment including forests and wildlife and to have compassion for living creatures. The Precautionary Principle makes it mandatory for the State Government to anticipate, prevent, and attack the causes of environmental degradation.

“In this light, we have no hesitation in holding that in order to protect the elephant population in the Sigur Plateau region, it was necessary and appropriate for the state government to limit commercial activity in the areas falling within the elephant corridor,” the judgment said.

It then dealt with submissions that the scientific accuracy of the Expert Committee’s Report, which earmarked the single elephant corridor in Nilgiris, was “at odds with authoritative scientific publications.”

“It has been argued by the appellants that their resorts and other establishments do not fall within the historic corridors identified in these publications. We see no reason to interfere with the above factual findings of the High Court and also do not find fault in the State Government’s adoption of the recommendations of the High Court-appointed Expert Committee, through the impugned G.O.,” it said.

It then dealt with last submissions of land and resort owners that there has been substantial variance between the acreage recommended for acquisition for the corridor by the Expert Committee and the acreage mentioned in the GO.

“We are of the view that it is just and proper to hold an inquiry to establish the veracity of the factual objections of the appellants,” it said.

The bench appointed a three-member panel to which Ajay Desai, consultant to the World Wide Fund for Nature-India and Praveen Bhargava, Trustee of Wildlife First and Former Member of National Board for Wildlife, are the other two members.

The state government and the district level authorities are directed to provide their full cooperation and produce any and all files/documents required by the Inquiry Committee to address the grievances of the appellants and any other persons claiming to be similarly aggrieved, it said.

Land and resort owners and others claiming to be aggrieved by the GO and subsequent actions are permitted to file objections containing their grievances before the Inquiry Committee within a period of four months from today, it said.

The high court had observed that some of the persons had built dwelling houses on their lands, some of them have encroached upon government lands and put up constructions and some of them are cultivating the said lands falling under the elephant corridor.