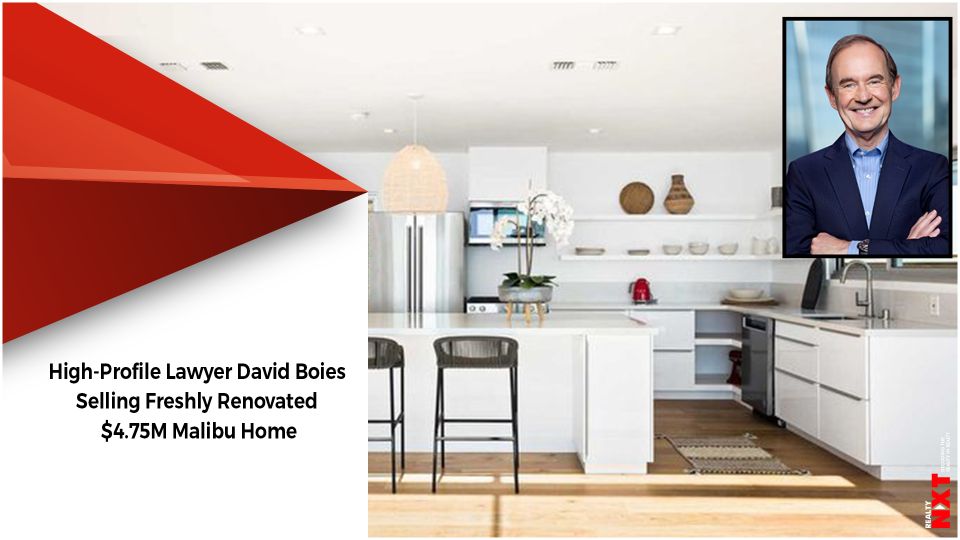 The look is what the listing calls a blend of “beach living with the sophistication of modern architecture.”

The high-profile lawyer David Boies is making the case for a buyer to purchase a Malibu home he owns. The freshly renovated retreat is available for $4.75 million.

Boies and his wife, Mary, purchased the property from Mary’s aunt and uncle in 2013, but never lived in the home. Instead, they extensively renovated the scenic space after Mary’s relatives passed away.

The result is a stylish and sleekly modern abode with ocean views integrated into the design. The look is what the listing calls a blend of “beach living with the sophistication of modern architecture.”

Built in 1968, the three-bedroom, 3.5-bathroom home spans 2,175 square feet and features a 28-foot-long skylight, which brings both natural light and starry skies into the common areas.

The main living and dining space includes an original wood-burning fireplace, updated to go with the modern refresh of the home.

The sleek kitchen contains oversized Caesarstone counters, bar seating, and open shelves, all in a matching monochrome white palette. The kitchen looks out to the living and dining area.

Skylights run overhead, and walls of glass provide ocean vistas. The space opens out to a patio for outdoor dining and offers a seamless flow between indoor and outdoor living.

Ten-foot sliding glass doors open the living area out to the deck, and all three bedrooms also open outside. Wide-plank wood floors flow throughout the home, a warm contrast to the stark white walls.

The good looks of the property are bolstered by some solid structural updates.

“This home was engineered to allow stunning walls of glass and an airy, open floor plan,” says the listing agent Blake Varga of The Agency (who is co-listing with Eric Haskell, also of The Agency).

“Cosmetics were only a small percentage of this massive renovation,” he says. “In order to support an extended deck and raised ceilings, the foundation was secured to bedrock caissons. Steel framing is tied directly to the caissons below, which gives this home a lot more value than just its looks.”

Varga adds that another standout feature is the secluded location.

“The home is situated at the end of a small street, behind a gated driveway, with unobstructed views, and only adjacent to one neighbor,” he says.

And although it’s decidedly private, the home sits close to the high-end dining and shopping of Palisades Village, Santa Monica, and the Malibu beaches.

Boies, 79, is chairman of the law firm of Boies Schiller & Flexner. He’s been involved in monumental legal cases, from repping the U.S. Justice Department’s case against Microsoft in an antitrust action to representing the Democratic candidate, Al Gore, in the 2000 presidential election recount, and more recently in representing the victims of Jeffrey Epstein.

He has also represented more controversial clients, including the blood-test startup Theranos and the convicted sexual offender Harvey Weinstein.