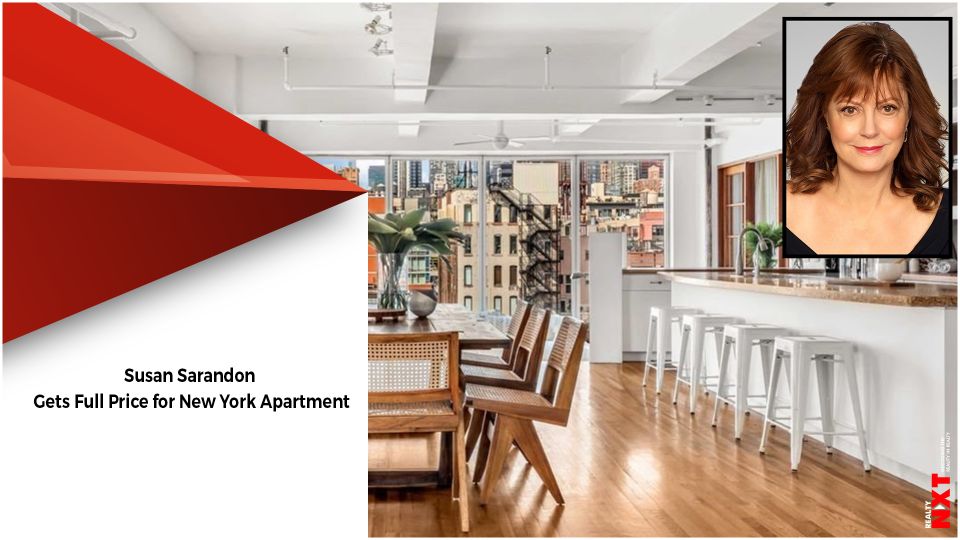 Actress Susan Sarandon has sold her longtime New York apartment, which she purchased with former partner Tim Robbins in 1991, for its full asking price of $7.9 million.

Ms. Sarandon listed the unit for sale in July as the city was just emerging from the worst of its Covid-19 crisis. The roughly 6,000-square-foot Chelsea spread spans two floors of a boutique nine-story co-op, a former industrial building dating back to the 1920s.

It has a dining room, an office with custom wood built-ins and a vast open living space Ms. Sarandon calls “the field,” which was reserved for her three children to play and perform as they were growing up. The apartment has two terraces, a small one off the master suite on the upper floor and a larger one on the floor below.

The home also has a bright blue-painted bathroom where Ms. Sarandon keeps her awards, including her Oscar for “Dead Man Walking.”

“I am, of course, sad to say goodbye to the apartment where I raised my children. I will forever remember it dearly,” Ms. Sarandon said in a statement. “But New York City is still my home. I am hopeful that the next owners can cherish it and all that New York City has to offer, just as we did and will continue to do.”

Listing agents Nikki Field and Mara Flash Blum of Sotheby’s International Realty said the home immediately got a lot of attention, garnered multiple offers and they had a contract signed within two weeks. It was an atypical situation at a time when high-end deal flow in Manhattan had ground to near a halt.

“This was a unicorn. A total one-off,” Ms. Field said.

While she declined to name the buyers, Ms. Field said they were local and upgrading from another Manhattan home. Ms. Sarandon is downsizing to a smaller home in the neighborhood. “It’s a great endorsement for those of us who believe in the future of New York,” Ms. Field said.

Ms. Sarandon left behind a few of her belongings for the new owners, including a large tree in the living room and a desk she had worked at, Ms. Field said.

In a July interview, Ms. Sarandon said she was selling the apartment because it was too large for her needs now that her children were grown up. She recounted some of her fondest memories of living there. Once, when her daughter Eva was a child, she invited friends over for a “camping party” and they cooked hot dogs in the property’s fireplace and slept in sleeping bags on the “field.” Ms. Sarandon’s friend and “Thelma & Louise” co-star Geena Davis dressed up in a bear costume to scare the children.

(This story has been published from without modifications to the text. Only the heading has been changed)