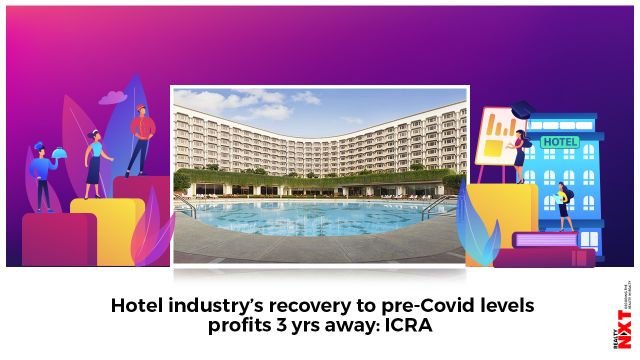 The hotel industry has witnessed one of the worst revenue declines, in Q1FY21, with revenues for the industry sample declining by 85 per cent.

The Indian hotel industry’s recovery to pre-Covid levels profits is at least three years away, rating agency ICRA has said.

The ratings agency said that road ahead for the industry is rough as revenues and margins are expected to post record decline in FY21 with losses mounting over the next two years.

The hotel industry has witnessed one of the worst revenue declines, in Q1FY21, with revenues for the industry sample declining by 85 per cent.

“Despite sharp weakening in interest coverage, recourse to the RBI provided moratorium on debt servicing as part of its Covid relief package announced in March 2020 supported the industry.”

As per the statement, about 66 per cent of ICRA’s hospitality portfolio applied for moratorium under this scheme and several of these will apply for restructuring under the K.V. Kamath committee too.

“Although hotels have been gradually allowed to reopen, occupancies have remained subdued in H1FY2021,” the statement said.

“This will keep revenues moderated, resulting in operating losses and stretched debt metrics during FY2021 and FY2022.”

The industry has reported a 2.7 per cent de-growth in topline with flat operating margins at 22 per cent in FY2020.

“With an 85 per cent YoY decline witnessed in revenues in Q1 FY2021 and subdued occupancies witnessed in Q2 FY2021 as well, industry wide revenues are expected to witness sharp de-growth of 60-65 per cent for FY2021,” ICRA said.

“Despite several measures taken by the companies to variabilise the fixed costs, the industry is likely to report massive operating and net losses in FY2021.”