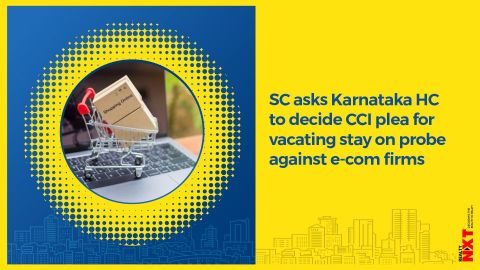 Solicitor General Tushar Mehta, appearing for the CCI said that the probe ordered against e-commerce companies was administrative in nature and would not affect the rights of any party.

The Supreme Court Monday asked the Karnataka High Court to decide the CCI plea for vacating stay on the investigation against e-commerce giants Amazon and Flipkart for alleged anti-competitive practices.

A bench comprising Justices A M Khanwikar, Dinesh Maheswari and Sanjiv Khanna asked the Competition Commission of India (CCI) to approach the High Court for relief.

Solicitor General Tushar Mehta, appearing for the CCI said that the probe ordered against e-commerce companies was administrative in nature and would not affect the rights of any party.

He sought keeping the petition pending saying there are several wider issues involved in the case.

Senior advocate A M Singhvi, appearing for the e-commerce companies, said the CCI approached the top court after the delay of over 200 days.

The bench said that the High Court would hear the matter and decide it within six weeks and added the petition may be revived if no decision is given by the High Court in the said period.

On February 14, the High Court had granted an interim stay on the investigation ordered by the CCI against e-commerce companies Amazon and Flipkart.

Amazon had moved the high court seeking a stay on the investigation ordered by the CCI.

Flipkart also filed a petition in the High Court seeking to quash the order passed by the CCI directing a probe into allegations of anti-competitive conduct.

In its plea, Amazon had sought quashing and setting aside the CCI’s January 13, 2020 probe order, and had also prayed the court to provide relief based on “facts and circumstances of the case in the interest of justice”.

In its petition before the High Court, Amazon had contended that the CCI order had been passed “without application of mind” and would cause irreparable loss/ injury to the goodwill/reputation of the company if an investigation is allowed.

The fair trade regulator CCI, in January, this year had ordered the probe against Flipkart and Amazon for alleged malpractices, including deep discounting and tie-ups with preferred sellers on their platforms.

The order by CCI followed complaints filed by traders’ bodies including by Delhi Vyapar Mahasangh, whose members comprise many traders dealing in smart phones and related accessories.

ALSO READ: Facilio, The One-Stop-Shop For IoT Based CRE Solutions