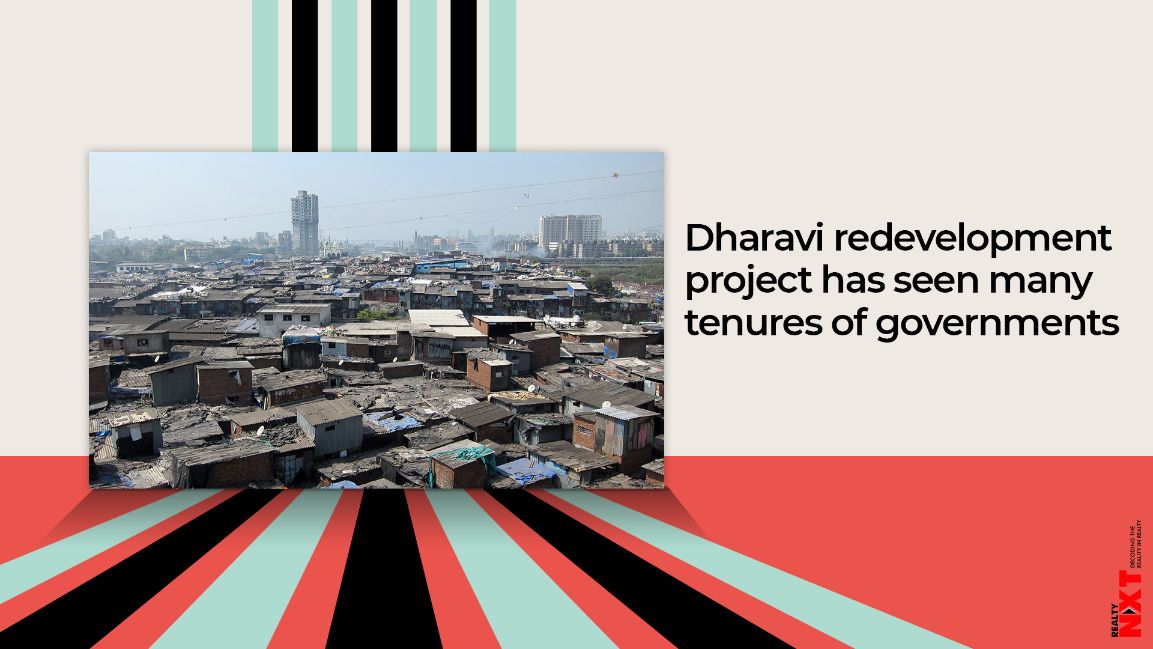 It has been decades since the idea of redeveloping Dharavi germinated.

The poor living conditions coupled with it being dubbed as Asia’s largest slum are not hidden from anyone. The redevelopment of Dharavi is a project which has seen many tenures of governments come to discuss it, invite bids and then all plans come crumbling down.

How was Dharavi slum created?

Experts estimate that the Dharavi slum originated sometime in the year 1884. Its maiden residents were the fishermen and their families. Back then, Dharavi was full of creeks and swamps. In the late 1950s, the area saw a rise in the number of inhabitants with migrant workers from all over the country opting to stay here as Dharavi’s swamp started to fill in because of natural and artificial causes.

Initially, Dharavi was on the edge of Mumbai (back then the city began at Churchgate and ended roughly at Bandra). This is why Dharavi didn’t pose any problem to the mainland of Mumbai. However, the city expanded northwards and saw a rise in population. Several industries sprung up and this led to a rise in the pressure to include more and more land into mainland Mumbai.

Soon Dharavi found itself into the centre of Mumbai. Many slums started developing here and the land was owned by the state government of Maharashtra and the Municipal Corporation of Greater Mumbai (MCGM). Slum-dwellers soon started building huts and shanties in a disorganised way.

Realising the disastrous effect the area was having on the rest of the city way back in 1971, the Maharashtra Slum Areas (Improvement, Clearance and Redevelopment) Act was passed. Improvement works were defined therein. The Slum Improvement Programme (SIP) was created in 1972 to give the residents basic amenities of water, electricity, latrines and sewage disposal. The SIP could not be implemented as there was a failure to carry out a proper census of the area.

In 1976, after an approximate counting of the number of settlements in the locality, the residents were provided with photo-passes and the area was slightly upgraded with the building of taps, toilets and electrical connections. Soon the Sion-Mahim Link road, the 60 feet and 90 feet roads were built and the area got its first sewer and water lines. The state government made arrangements of transit camps to help migrants relocate, especially those whose settlements were proving to be a hindrance to further develop the city’s infrastructure.

However, in 1991, this plan of redevelopment ended because of administrative difficulties, red-tapism, no proper records and an important chunk of the slum was now under the control of slum lords who feared losing their control if any redevelopment took place. In 1995, Mukesh Mehta, an NRI architect, proposed the Dharavi Redevelopment Project (DRP). In 2004, the Government of Maharashtra sanctioned the DRP, which aims to redevelop the Dharavi Notified Area (DNA), a roughly triangular patch of land covering a whopping 525 acres of prime land. But the last 16 years have seen the pace of the DRP pick-up and weaken several times.

As per records, there are 28 temples, 11 mosques, 6 churches, 50 banks and 60 government schools scattered around the area. Dharavi also has its very own mobile design museum, where residents showcase items produced in the slum. The area, despite its inhumane living conditions, boasts as a major tourist attraction of Mumbai with many local as well as international movies being filmed here.

Dharavi is home to a vast number of local businesses like the manufacturing of premium leather goods, embroidered garments, pottery, plastic and many more. Rents in the area can go as low as Rs 200 and as high as Rs. 5,000. Dharavi is known to be a hub for affordable housing despite the insanely skyrocketing rental prices of the rest of Mumbai.

Dharavi is ironically in close proximity to one of the most developed areas of Mumbai, the Bandra Kurla Complex. It also makes for an excellent travel option thanks to the fact that it falls in the hearts of two main suburban railway lines of Mumbai. Dharavi surprisingly has a decent literacy rate of 69%.

Dharavi is notorious for its tiny “homes” which hold many family members in one room. These settlements mostly don’t have any windows and their asbestos roofs can cause many accidents if they break. Dharavi also lacks any kind of fire safety measures. It is in these rooms that residents live, work and sleep. 85% of the residents are employed and a few have even become rich. The biggest problem the area has is the complete lack of hygiene with  open holes above a river acting as toilets. Dharavi has a recycling zone. It is claimed that Dharavi’s recycling zone could be the way forward to a sustainable future. Everything is recycled from cosmetics and plastics to computer keyboards and this makes Mumbai one of the world’s largest recycle practicing cities.

The residents of the area have had enough with the constant yoyo that started way back in 1995. In January this year, the Dharavi Redevelopment Committee (DRC), a federation of 52 associations of residents, opposed any new bids for the ambitious project and demanded that last year’s winner (Seclink Technologies Corporation) start the process at the earliest. They had won against Adani Group.

Seclink Technologies Corporation (STC) had even greenlit the initial investment of Rs. 7,100 crore for the Rs. 26,000-crore mega redevelopment plan.

Soon after, the Dharavi Redevelopment Project Authority, a state-run special purpose vehicle, had issued a Letter of Intimation (LOI) and awarded the contract to the company. STC was funded by the Royal families of the United Arab Emirates (UAE) for the project.

However, no progress was made after the big announcement as the project got stuck due to an issue over the purchase of a 45 acre plot of railway area in Matunga.

Now, a Committee of Secretaries (CoS) has declared that a new tender will be floated and new bidders will be invited for the same. State Chief Secretary Sanjay Kumar also confirmed the cancellation of the tender.

In 2004, the DRP was officially sanctioned which led to the birth of the Dharavi Notified Area. It was created along with the 2005 Urban Development Department Resolution wherein the Slum Rehabilitation Authority (SRA) was appointed the Special Planning Authority for the DRP. According to Mehta, DRP aims to provide “sustainable development; rehabilitation of all the slum families and businesses; reestablishment of non-polluting industries; and the integration of slum dwellers with mainstream residents.”

The plan was to use the HIKES (health, income, knowledge, environment, and socio-cultural development) model program, where sustainable urbanism would take a front seat. In simpler terms, the DRP, whenever it is implemented, will upgrade the lives of the people living thereby providing them with cross-subsidized permanent high-rise modern homes, clean water, a hygienic waste disposal system, a fully functional drainage system, and green parks.

In 2007, global bids for the DRP kick-started but failed to attract any big names.

Between 2007–08 the then state government and NGO MASHAL undertook a GIS-biometric survey and a socio-economic baseline of sectors 1–5.

It is believed that most developers shied away from DRP because of the infamy of Dharavi and countless fluctuations of the real estate market.

The government slowly started taking a step back from the idea as there wasn’t much enthusiasm seen in the private real estate community.

The next eight years saw zero progress and MHADA stepped in to develop Dharavi’s sector 5.

In 2018, the BJP government decided to amp up the DRP and a special purpose vehicle (SPV) came into being.

Right before the bidding process began a plan of action was agreed upon. According to it, sectors 1–5 would be developed as one single entity by one single developer or their association.

For the SPV, Maharashtra’s stake would be 20 percent (Rs. 100 crores) while the private player would hold the remaining majority (Rs. 400 crores).

Thereafter, the BMC sanctioned the Development Control Regulations 2034 with special regulations for the DRP towards the end of 2018.

Then STC won the bid. All previous attempts at bidding for the redevelopment project have hardly attracted any developers and this is why STC winning it was such a huge turning point for it.

Dharavi measures 2.4 sq km with 60,000 families living here in inhumane conditions. The constant delays in the area’s redevelopment have resulted in nothing but hopelessness and misery for its 8.5 lakh residents. Constant corruption, red tapism and the indecisiveness and lax of attitude by several ruling parties have led towards the current situation.