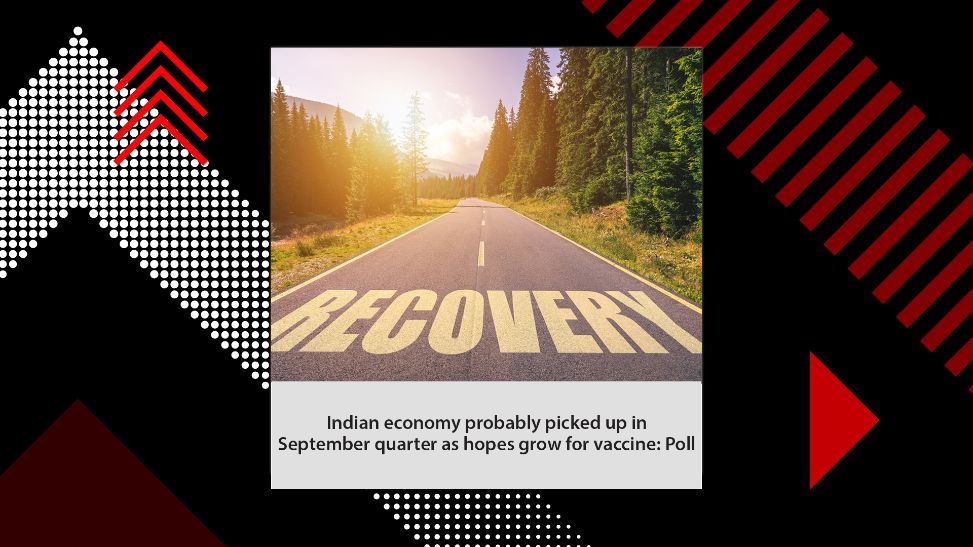 Economists have marginally raised forecasts this month after a pick-up in consumer demand for autos, non-durables and rail freight during the festival season, as prospects grow for COVID-19 vaccines to be launched early next year.

India’s economy is likely to have shown signs of a pick-up in the quarter to September after a record contraction the previous quarter and is expected to recover early next year on hopes of better consumer demand fed by progress on coronavirus vaccines.

Economists in a Reuters poll forecast gross domestic product in Asia’s third-largest economy to shrink 8.8% in the September quarter, after a contraction of 23.9% in the previous quarter, amounting to a technical recession.

They also predict a contraction of 3% and growth of 0.5% in the December and March quarters respectively, with the economy shrinking 8.7% over the whole financial year for its worst performance in at least four decades.

Economists have marginally raised forecasts this month after a pick-up in consumer demand for autos, non-durables and rail freight during the festival season, as prospects grow for COVID-19 vaccines to be launched early next year.

“In particular, monthly data on capital goods production suggests that investment has bounced back more sharply than we had thought likely,” he said in a note this week.

Despite improvement in the growth outlook, however, a recent surge in infections presents downside risks for the economy, said Shaktikanta Das, the governor of the Reserve Bank of India.

“We need to be watchful about the sustainability of demand after the festivals and a possible reassessment of market expectations surrounding the vaccine,” he said on Thursday.

India’s tally of infections has crossed 9.27 million to stand as the world’s second-highest after the United States, with more than 135,000 deaths in the south Asian nation.

As some states re-imposed curbs this week to fight the second wave of infections, businesses feared the restrictions could slow the pace of recovery in the next two or three months, as well as heightening the risk of inflation.

Prime Minister Narendra Modi, whose party won elections this month in the eastern state of Bihar, expects the recent easing of farm and labour laws, along with tax incentives, to bolster manufacturing and lure more foreign investment.

But critics say the economy, which must grow at more than 8% a year to create jobs for millions of young people entering the workforce, faces a prolonged slowdown, thanks to a delay in resolving a banking crisis and inadequate stimulus measures.

“Even widespread vaccination would not restore India to economic health, as tepid fiscal support and a beleaguered banking sector will weigh on economic growth long after the virus is brought under control,” said Shah.