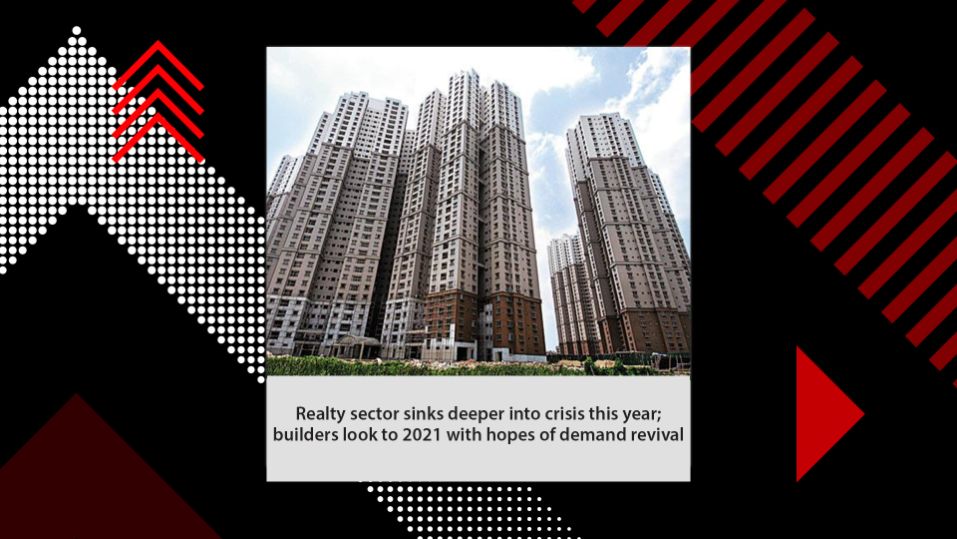 Only in October did the property market start seeing some traction, driven by pent up as well as fresh festive demand that got further consolidated towards trusted developers.

India’s real estate industry has been trying to get back on its feet ever since the 2016 note ban laid the sector low but 2020 was hardly the year to stand tall. With the pandemic devastating demand in the economy, the industry is now looking to the New Year with the hope of a sharp recovery in sales.

Stable property prices, low home loan interest rates, discounts and freebies offered by developers and lower stamp duty rates offered by some states are what the industry hopes will aid in the recovery after housing sales and office space leasing sunk by 40-50 per cent this year.

The economy, which witnessed one of the world”s strictest lockdowns that lasted over two months, saw muted demand for housing and office space through September even as the developers quickly adopted digital tools to reach out to prospective buyers.

Only in October did the property market start seeing some traction, driven by pent up as well as fresh festive demand that got further consolidated towards trusted developers.

Stamp duty cut by the Maharashtra government provided a big relief to builders and buyers alike, and was instrumental in reviving demand in Mumbai and Pune. Many developers absorbed the balance stamp duty to boost their sales. The pandemic reinforced the importance of home ownership in a world enamoured with the concept of shared economy.

On the performance in 2020, realtors” apex body CREDAI”s Chairman Jaxay Shah said the realty sector in the last few years has “borne the repercussions of fiscal and non-fiscal reforms”, be it demonetisation, introduction of GST or RERA.

“While the sector was under pressure owing to all the reforms, the COVID-19 pandemic made things worse as the sector is reeling under the worst ever crisis,” Shah said.

“The real estate sector has been facing headwinds for the past few years. The situation became tougher owing to the COVID-19… uncertainty over jobs and livelihoods robbed the market of its potential buyer-base leading to near-zero demand,” CREDAI President Satish Magar said.

Post-lockdown, he said sales have improved but are yet to touch pre-COVID levels in most cities.

“There are indicators that point towards recovery in the sector, but at a less than desired pace,” Magar told PTI.

The CREDAI President said the government and the RBI took steps to help the sector but those do not address the prolonged problems as he sought both demand and supply side interventions in the upcoming Budget.

To help developers tide over the crisis, the Centre invoked force majeure clause under the Real Estate (Regulation and Development) Act (RERA) to extend the deadline for completion of projects by six to nine months.

Interest subsidy for middle-income group was extended till March 2021 while a scheme was launched to provide homes to migrants/ urban poor at an affordable rent. One-time loan restructuring was also allowed.

As many central ministers kept advising developers to offload their unsold inventories and not wait for price increases, industry demanded changes in tax rules. Accordingly, Section 43 CA of the Income Tax Act was relaxed to allow primary sale of flats up to Rs 2 crore at a price that can be 20 per cent below the circle rate from the earlier 10 per cent differential.

The government-backed Rs 25,000-crore SWAMIH stress fund, launched last year to complete around 4.5 lakh units, has been operationalised and an investment of over Rs 10,000 crore has already been approved but many builders complained about tough eligibility criteria to secure funds.

These measures did offer some breathing space to developers but were not enough to trigger a V-shaped recovery in housing market.

India”s office market, which has been performing well over the last few years despite overall slowdown in the property market, could not protect itself from the onslaught of COVID-19. Net leasing of offices is estimated to fall at 25-27 million sq ft in 2020 from record 46.5 million sq ft last year, according to JLL India.

As companies deferred their decisions on expansion and adopted Work from Home (WFH) policy for employees, the fall in office demand was inevitable.

Nevertheless, the office market was full of action and attracted huge investments with developers monetising their commercial portfolio to trim debt.

The year saw some big-ticket real estate deals, including RMZ group”s divestment of a large commercial portfolio to Brookfield for around Rs 14,500 crore. Prestige group sold its commercial assets to Blackstone for nearly Rs 10,000 crore.

Among other development in the sector, Indiabulls Real Estate and Embassy group decided to merge their projects.

Among all segments, retail real estate was the worst hit as shopping mall owners had to suffer huge losses due to rental waivers to retailers and low footfall. Co-working and co-living operators were severely impacted too.

“The present is challenging, and times are tough but the best for the Indian real estate sector is not far away,” Shah said.

The misery of 2020 notwithstanding, the industry is looking to the New Year with hope.