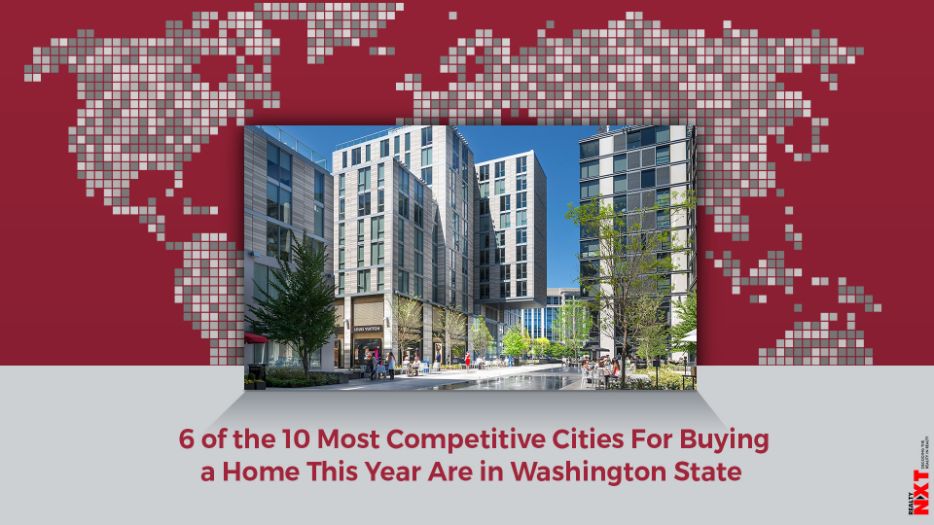 This is all according to a Redfin analysis that ranked the competitiveness of cities from January 1 through December 8, 2020

Six of the 10 most competitive cities for buying a home this year are in Washington state, according to a new report from Redfin  the technology-powered real estate brokerage. Spanaway, WA—located about 45 miles south of Seattle in the Tacoma metro area—is the most competitive city of 2020, with 68.9% of homes sold above list price and the typical home staying on the market for just five days before going under contract, eight fewer days than last year. Home prices were up 20.8% from the year before and supply was down 32.7%.

This is all according to a Redfin analysis that ranked the competitiveness of cities from January 1 through December 8, 2020 (year-over-year changes are based on comparisons to January 1, 2019through December 31, 2019), based on Redfin’s Compete Score—a measure of how difficult it is to win a home on a scale of 0 to 100 based on factors including days on market, share of homes that sold above their listing prices and sale-to-list price ratio. The 10 most competitive cities are:

The suburbs are hot for homebuyers leaving expensive SeattleAlthough the Tacoma metro was already popular before the pandemic—it was the nation’s hottest housing market in mid-2019—the shift to remote work has intensified homebuyer interest in the area.

“I’ve lived in Spanaway for 33 years and the market has never been so hot, with most homes flying off the shelf as soon as they’re listed, with multiple offers,” said local Redfin agent Ellen Campion. “In addition to soldiers moving into the area because they’re stationed at Joint Base Lewis-McChord, the exodus from Seattle this year has been a huge contributor to the Tacoma-area craze. Urban life has lost some of its luster because of the pandemic, and some folks are upset about the local government response to protests in Seattle. This area offers community, amenities, affordability and space.”

Wyoming, MI—located just five miles south of Grand Rapids and considered a suburb of the city—is tied with Lacey and Tacoma as the second-most competitive city of 2020, with 66.7% of homes selling above list price and the typical home selling in six days, two fewer than the year before. Prices were up 13.8% year over year to $181,000 and supply was down 17.1%.

Three more cities in western Washington are also among the most competitive of the year: Eastmont, located about 25 miles north of Seattle, and Frederickson and Graham, both south of Seattle.

Rachel Ivy, a Redfin agent in Snohomish County, which includes Eastmont, said the flexibility of remote work has had a noticeable impact on homebuyers, who are moving to areas they wouldn’t have previously considered. Many of them are leaving Seattle and expensive Eastside cities such as Bellevue and Kirkland for more affordable northern suburbs.

“I recently wrote an offer for a client on a home in the Eastmont area, and we offered more than $70,000 above list price and waived the inspection contingency,” Ivy said. “But we still didn’t win the home. The listing agent told me we were in fifth place out of 13 offers. It’s common to see homes selling for more than $100,000 over asking price.”

Two suburban cities in the Oakland metro are also among the most competitive in the countryPleasant Hill and San Leandro, both suburban cities located east of San Francisco, are also among the top 10 most competitive cities of 2020. Sixty-one percent of homes sold above list price in Pleasant Hill, with the typical home spending 13 days on the market before going under contract (-6 YoY), and 82.6% of homes sold above list price in San Leandro, with the typical home selling in 13 days (-4 YoY).

A town in coastal Maine completes the list of most competitive cities South Portland in the Portland, ME metro rounds out the top 10 most competitive cities of 2020, with 55.6% of homes selling above list price and median days on market clocking in at seven days, 10 less than the year before. The typical home in South Portland sold for $350,000 this year, up 7.7% year over year, as supply plummeted 55.1%.

“People are flocking to Portland from more expensive cities because it’s one of the last affordable coastal areas in the country,” said local Redfin agent Megan McShane. “It’s hotter than ever this year with remote workers moving in from places like Boston and Los Angeles. When I moved to the area two years ago, one of the first houses I put under contract was in South Portland, which is desirable because it’s right on the water. It had been sitting on the market for a few weeks and we were able to negotiate the price down. That would never happen now; everything is getting scooped up with multiple offers, waived contingencies and waived appraisals.”

To read the full report, including additional charts and data, please visit: https://www.redfin.com/news/most-competitive-cities-homebuying-2020.