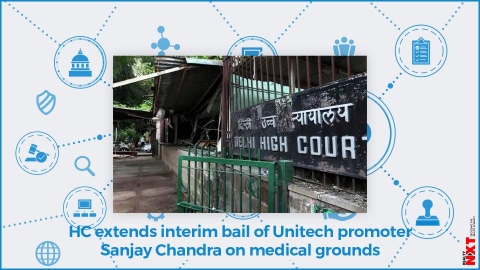 In 2018, the top court had directed a forensic audit of Unitech Ltd and its sister concerns and subsidiaries.

The Delhi High Court on Wednesday extended the interim bail of Unitech promoter Sanjay Chandra, who was arrested for allegedly cheating home buyers, till January 21 on medical grounds. A vacation bench of Justice Vibhu Bakhru granted the relief to Chandra, who was earlier released on interim bail by a trial ground for four weeks, on the same terms and conditions as imposed by the chief metropolitan magistrate (CMM) in the December 3 order.

“It is not disputed that interim bail granted to various prisoners is now being extended uniformly. In view of the medical condition of the applicant (Chandra), this court considers it apposite to allow the present application and the interim bail of the applicant is extended till January 21, 2021,” the judge said while dictating the order.

Chandra was lodged in jail under judicial custody since August 2017 for allegedly siphoning off home buyers’ money.

Senior advocate Mohit Mathur, representing Chandra, sought extension of interim bail by 45 days, saying his medical condition was not good and there is high risk of complication as he is suffering from co-morbidities.

His interim bail was not extended by the CMM and additional sessions judge after which he approached the high court.

On January 20 this year, in a respite to over 12,000 hassled home buyers of Unitech, the Supreme Court had allowed the Central government to take total management control of the realty firm and appoint a new board of nominee directors.

In 2018, the top court had directed a forensic audit of Unitech Ltd and its sister concerns and subsidiaries by Samir Paranjpe, Partner, Forensic and Investigation Services in M/s Grant Thornton India.

The forensic auditors had submitted their report which said that Unitech Ltd received around Rs 14,270 crore from 29,800 homebuyers mostly between 2006 and 2014 and around Rs 1,805 crore from six financial institutions for the construction of 74 projects.

The audit revealed that around Rs 5,063 crore of homebuyers’ money and around Rs 763 crore of funds received from financial institutions were not utilised by the company and high value investments were allegedly made in off-shore tax-haven countries between 2007 and 2010.