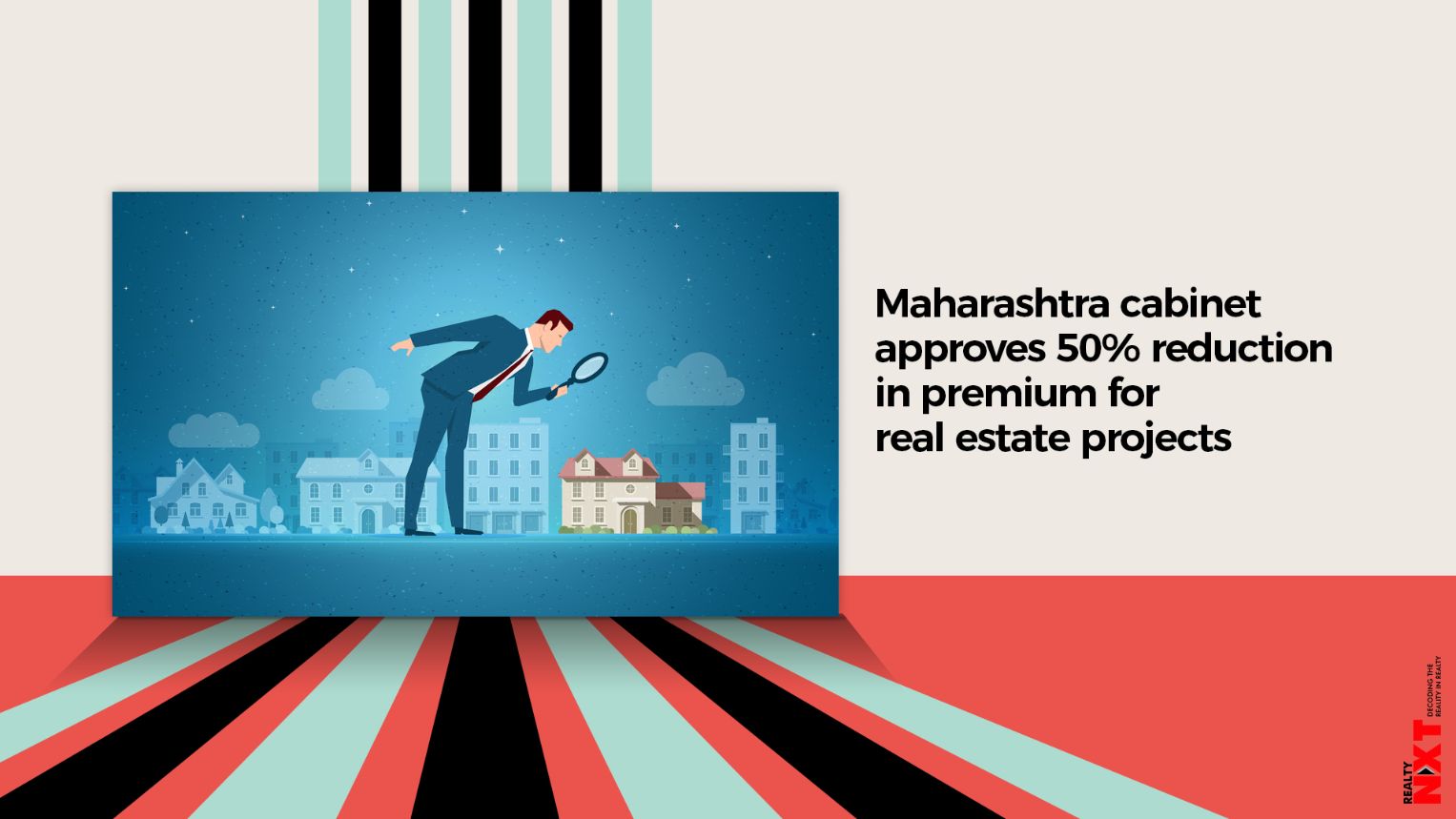 After the stamp duty cut, Naredco Maharashtra welcomes yet another blockbuster decision of the Maharashtra Government to reduce the construction premium by 50 per cent.

The Maharashtra cabinet on Wednesday approved a proposal offering 50 per cent waiver in premium to developers on real estate projects till December 31, 2021.

The realty developers, who take benefit of the 50 per cent waiver in premium on construction projects for the next one year, will have to pay the entire stamp duty amount on behalf of customers.

A statement from the Chief Ministers Office said the cabinet”s decision is based on the report submitted by the Deepak Parekh committee set up to suggest measures to boost the states construction sector post-COVID-19 lockdown.

The statement said the committee has submitted its recommendations regarding attracting more investments in the construction sector and also on affordable housing.

To avoid windfall to any specific company or project, the waiver of premium will be allowed at the ready reckoner rate existing as on April 1, 2020, or the current ready reckoner, whichever is high, it said.

Leader of Opposition in the assembly Devendra Fadnavis of the BJP criticised the governments decision to offer 50 per cent premium to builders for one year, saying it will not benefit property buyers.

Speaking to reporters, Fadnavis said, Slashing the premium will result in some builders getting windfall gains.

“I had asked the state government to involve RERA (housing sector regulator) in the process of registration and stamp duty collection to ensure property buyers get the benefits of such a decision. However, the government has done exactly the opposite.”

This decision is beneficial to builders and not to the common man, the former chief minister said.

“There was a need to give some relaxation to people but this half-hearted decision will not benefit property buyers for sure, the BJP leader claimed.

I am gathering more information over the issue. Once I compile it, I will write a fresh letter to the chief minister. I am deeply pained to hear about ongoing talks of kickbacks to get the premium slashed, Fadnavis said.

Meanwhile, Mumbai Congress president Bhai Jagtap on Wednesday demanded that the property tax for houses measuring up to 500 sq ft in the metropolis be waived totally and alleged the previous BJP government had failed to do the needful in this regard.

Speaking to reporters, he also demanded that houses and tenements measuring from 501 sq ft to 700 sq ft be given a 60 per cent waiver in the property tax, and slum-dwellers in Mumbai be provided water for free sans any levy.

The then BJP-Shiv Sena government in March 2019 had approved a proposal to exempt residential properties up to 500 sq ft, within the Mumbai municipal area limits, from property tax.

Earlier, the Shiv Sena-ruled Brihanmumbai Municipal Corporation (BMC) had announced that the property tax for houses up to 500 sq ft will be waived.

While reacting to the breaking news of State cabinet to approve Reduction in Premiums, Dr. Niranjan Hiranandani, President NAREDCO gladly said that “It is a great bolstering move made by the state government by sealing approval to reduce premiums by 50% under the new DCPR rule 2034 across the board for on-going and new projects up to Dec 312021. This move will go a long way in expediting the project completion and the industry will witness new launches in the market. The industry applauds this booster dose making many projects viable and we shall adhere to the rules laid down in lieu of availing these benefits. Also, the reduction in premiums for new launches will help the development at the lesser input cost and over a period of time, there is the possibility of lower price for new inventories that shall come into the market. It is a move expected to meet the urgent need for economic activity and generating employment. The industry will be injected with additional liquidity in the backdrop of cumulative policy reforms due to Covid pandemic, which has been considered as a ‘force majeure’ situation by the Government of India. This reduction in premiums will help in quick turnaround of projects and uplifting Industry sentiments.”

“After the stamp duty cut, Naredco Maharashtra welcomes yet another blockbuster decision of the Maharashtra Government to reduce the construction premium by 50 per cent. It will give a big respite to the developers, as the cost of premium, as well as approval cost, contribute 35 to 38% of the project cost, whereby the project cost will come down substantially. Mumbai alone attracts around 22 premiums which are higher than other top metro cities. Higher premiums put an additional financial burden on developers leading to higher costs for the homebuyers. Projects that wish to avail the benefit of concession will have to pay the full stamp duty on the sale of flats, whereby the consumers will get the direct benefit of this concession, granted by the state government. The decision will also bring the relatively higher construction premium at par with other states and the lending institutions will find the project funding more viable. It will result in more funding into the State’s real estate sector” said Mr. Ashok Mohanani – President, NAREDCO Maharashtra.

“The move to reduce the premiums is extremely welcome. It will provide respite to the cost burdens for developers thereby spurring on more supply at lower prices.  It is, however, important to realize that the charges paid for approvals include development charges and other charges under other heads.  Effectively this means the total benefits will be much less than 50%” said Mr. Rohit Gera, Managing Director, Gera Developments.

“Today’s announcement by the Maharashtra State Government is a landmark in boosting the real estate sector. After the recommendations of the Parekh Committee, the cut of 50% on premiums on real estate project will help the supply side to stabilise make development in the state more feasible. New supply has been restrictive due to many reasons including cost of raw material (land being raw material to real estate development) in the last many years, especially in large volume markets like Mumbai and Pune. This move will help rationalise input costs for the developers as well as help supply momentum, thereby keeping price escalation in control whilst striving towards the demand-supply equilibrium in the market. However, since both the demand side as well as supply-side measures are short term, it may prove beneficial to jump-start the real estate sector giving it an orbital velocity for next-level growth.

This will also make the sector attractive for investments from institutions. The reduction in premiums, coupled with the revision in stamp duty (that has helped catapult demand) will make real estate development in the state lucrative. Going forward, following the growth trend of demand, we expect new launches to increase accordingly.

As per Knight Frank’s report released today, MMR recorded sales of 22,407 residential units while new launches in the same period were recorded at 18,515 both registering a Year on Year growth. Residential Sales grew 80% in Q4 2020 over the same period last year while sales were a modest 3% above last year levels” said Mr. Shishir Baijal, Chairman and Managing Director, Knight Frank India.

“It’s the much asked for and required icing on the cake for the real estate sector, especially in the state of Maharashtra. After the steep, temporary reduction in stamp duty charges, the 50% reduction in premium payments until December 2021 will benefit the supply side immensely. It will also help developers pass on further benefits to homebuyers, invigorating demand for real estate projects that are under construction. This move is likely to propel developers to offer extended payment holidays and also give lucrative price proposals to buyers in projects where the inventory has been selling slowly. While the pandemic and subsequent lockdowns made developers focus on completing existing projects and largely postpone launching new ones, this move of having the different kinds of premiums and levies is going to make developers contemplate going back to launching new projects.”  said  Mr. Kaushal Agarwal – Chairman, The Guardians Real Estate Advisory.

ALSO READ: Millennials Make Up The Largest Group Of Homebuyers In United States