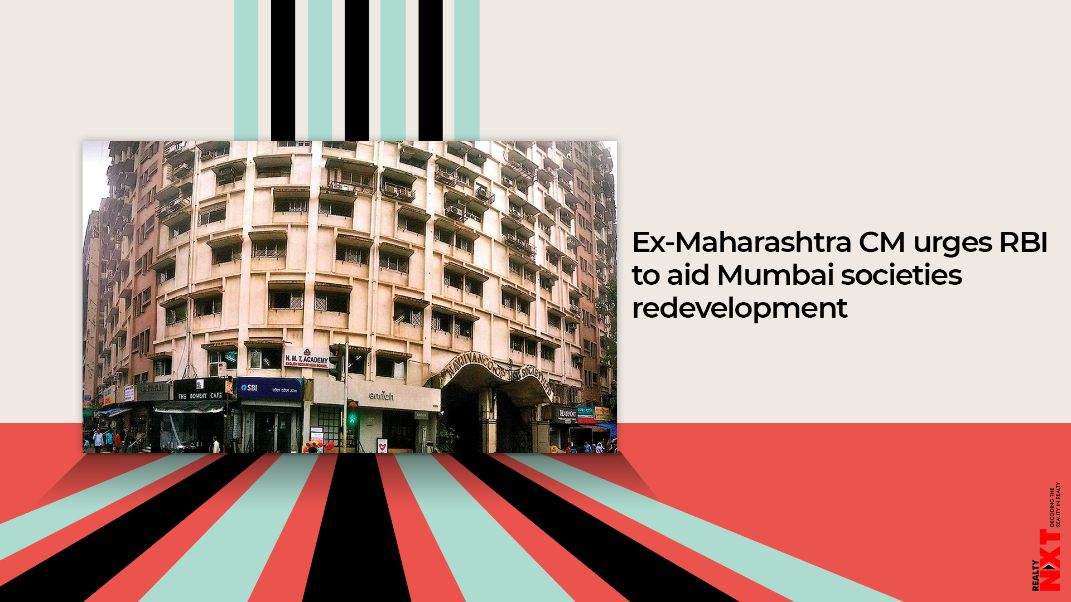 Fadnavis recalled that when he was Chief Minister, he had learnt that many CHSs were ready to embrace the new concept of ‘Self-Redevelopment’

Given the major problems confronting the redevelopment of some 5,800 old and dilapidated buildings in Mumbai, the opposition BJP in Maharashtra on Thursday submitted to the RBI a plea on finance and other aspects to boost ‘self-redevelopment’ by cooperative housing societies (CHSs).

They expressed concern over certain orders by RBI and NABARD seeking to treat the self-redevelopment projects as ‘Commercial Real Estate ventures’ which were contrary to the benefits envisioned under the ambitious self redevelopment scheme.

Fadnavis and Darekar said that the RBI has permitted certain private finance companies outside the purview of the state cooperative structure to lend money to CHSs and urged the regulator to ponder on this as the District Central Cooperative Banks are already facing huge competition from commercial and private banks.

The two leaders pointed out that around 5,800 redevelopment projects in Mumbai alone are languishing at various stages of incompletion and the residents, including many senior citizens have been rendered homeless despite having their own home.

Fadnavis recalled that when he was Chief Minister, he had learnt that many CHSs were ready to embrace the new concept of ‘Self-Redevelopment’ following which he had formed a committee to examine the proposal with the government, officials of Mumbai District Central Cooperative Bank, realty experts and the societies.

The government had accepted the recommendations of the committee and considering the benefits, on September 13, 2019, the state issued a special GR to facilitate finance for societies opting for self-redevelopment with Maharashtra State Cooperative Bank as the nodal agency, he said.

In order to make it more beneficial to the CHSs, the government offered a slew of concessions and incentives like a single-window clearance, interest subsidy of 4 per cent, 10 per cent extra FSI, TDR at 50 per cent of Ready Reckoner Rate, concessions or deferment in premiums payable to various government authorities, and reduced Stamp Duty of only Rs 1,000 for the member flats as applicable under Pradhan Mantri Awas Yojana (PMAY).

The state also permitted 2.5 FSI if one-third of the flats were for EWS, concessions in GST and Open Space Deficiency Premium, 3-year time-bound completion for all projects, vigilance committee to monitor the projects and self-redevelopment redressal committees at district levels.

Many CHSs which opted for the new self-redevelopment scheme has already made huge investments, secured the nearly 70 permissions required for the purpose, some have already demolished their buildings and others are on the verge of razing them.

At such a crucial stage, it was not possible for them to stop the projects if they are denied finance as promised under the scheme as it would ruin the entire process of self-redevelopment, could render the members homeless, besides throwing them at mercy of private builders, the two leaders told Das.

“Prime Minister Narendra Modi dreams of every family owning a house by 2022, a lot of projects have been initiated under PMAY for the weaker sections. When we are dreaming of enabling even the homeless to own a house, how can we deprive a home to a person who already owns one?” Fadnavis asked.

The BJP leaders called upon the RBI and Das to ensure that finance provided to self-redevelopment projects is not treated as a commercial real estate venture to uphold the objectives behind the scheme to benefit the common masses in tune with the Prime Minister’s dream for housing for all.