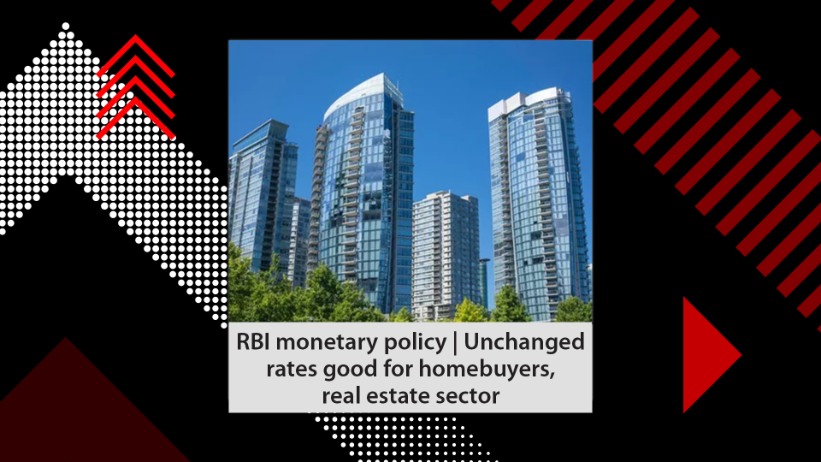 RBI continues to maintain an accommodative stance while focusing on economic revival.

The unchanged rates mean that home loans won’t get expensive and buyers can continue to buy homes at prevailing low rates, which will sustain housing demand, experts said.

“As the economy is gradually opening up and getting back on track to restore the lost momentum, the regulator has indeed brought innovative liquidity injection measures to maintain the policy stability and ensured that additional liquidity is provisional. It is extremely important for the regulator to balance its borrowings from the market so that it doesn’t jeopardize the financial stability and disrupts other market players.

The new policy’s paramount objective of economic revival was addressed by announcing innovative measures like enhancing liquidity by allowing NBFC to tap TLTRO on tap scheme, allowing additional credit for small MSME borrower’s up to Rs 25 lakhs, an exemption to FPI investment in defaulted corporate bonds to boost further investment in recaptured economic revival and firming up consumer protection.

“Given that the economy is well on its path to recovery and the Government’s continuous efforts to promote ease of doing business, digitization, focus on infrastructural development and capital expenditure will help the real estate sector business going forward.

With regards to the real estate sector, the government has continued on its stated path of supporting sector-specific sops and in light of this, we are optimistic that the government would initiate steps soon to address the immediate liquidity issues and changes in the GST regime amongst others. The entire focus would now be on how the government plans to boost demand and a lot needs to be done for the sector to improve the pace of growth”, said Mr. Surendra Hiranandani, Chairman and Managing Director, House of Hiranandani.

“The economic growth needs to be supported through the monetary policy and this is the foremost reason that the RBI has continued its accommodative stance. It has focused on balancing liquidity in the financial system while keeping inflation within its target. The interest rates will continue to be at a record low, however, the banks should pass on the benefits to the customers which will boost real estate demand.

Like the last quarter, we expect the demand to be robust in the Mumbai MMR region in this quarter. The state government’s recent announcement of reduction on premiums for developers along with stamp duty reduction for buyers will have a cascading impact on project sales, which will provide an immediate boost to the ailing sector. The real estate sector in India is expected to reach US$ 1 trillion by 2030 and it will contribute 13% to the country’s GDP by 2025″, said, Mr Ashok Mohanani, President – NAREDCO Maharashtra

“The RBI’s announcement on keeping the repo rate unchanged is a major boost to the industry and will further instill positive sentiments towards the real estate market. Homebuyers will continue to take advantage of the lowest ever home loan interest rates and encourage the desire of owning a home. With the emerging need, the demand for housing is going to sustain, thereby enhancing the value for creating assets. Betting on the opportunity, many fence-sitters will take the plunge and make the purchase”, Prashant Bindal, Chief Sales Officer, Lodha.

”The real estate sector has finally started showing signs of recovery with sales having picked up on the back of high affordability.
This higher affordability has been created on the back of lower apartment prices, lower interest rates and increasing salaries over the last 5 to 7 years.

The impact of this higher affordability has now percolated down to people who need homes and we are seeing this need being converted to demand.  Leaving interest rates unchanged provides a greater degree of stability for people to take this important decision’,’Mr. Rohit Gera Managing Director, Gera Developments

“With this accommodative stance, the RBI is expecting normalization of sectors as the CRR will further open up space for a variety of market operations and make lending easier. The RBI extending Targeted Long Term Repo Operations (TLTRO) to NBFCs will further enhance credit flow and potential for the affordable housing sector, SMEs, infrastructure projects etc.

“It is heartening that RBI acknowledges that NBFCs do a commendable job to provide credit to the underserved and New To Credit (NTC) segments in various sectors. The exclusion of credit to MSME from NDTL would expand the credit for MSMEs and this combined with the Co–Lending scheme between Banks and NBFCs can open credit for the NTC MSME customers.

The TLTRO on Tap scheme to NBFCs for incremental lending will usher in effective liquidity for NBFCs, which would work hand-in-hand with the new co-lending guidelines. The positive impact is that it would enhance the NBFCs’ ability to provide a credit lifeline to capital-starved MSMEs, including the NTC small businesses, supporting not only their revival and stabilization but also help look at growth.

The credit impact can be further expanded significantly with the extension of Partial Credit Guarantee (PCG) Scheme for portfolio purchase of loans for these sectors”, said Mr. Shachindra Nath, Executive Chairman and Managing Director, U GRO Capital.

“The RBI’s stance to retain the repo and reverse repo rates at 4% and 3.35%, respectively and decided to maintain the accommodative stance for “as long as required” will provide comfort to the markets. Passing on the benefit of on-Tap TLTRO to NBFCs will allow stressed sectors to borrow more, including the real estate and housing finance.

The revolutionary announcements on retail investors to provide direct access to G-Sec market and allowing residents to make direct remittances to IFCS for NRIs, along with the plans of an integrated ombudsman scheme, indications of normalcy returning in growth and the CRR normalisation roadmap, are among other important measures announced today that will encourage investments in the coming months”, said Mr. Ravindra Sudhalkar, CEO at Reliance Home Finance.