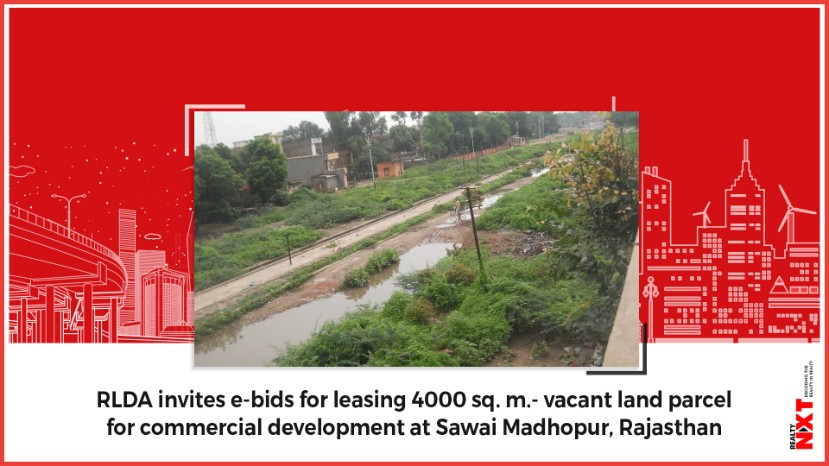 Rail Land Development Authority (RLDA) is a statutory body under the Ministry of Railways, for the development of vacant Railway land.

Rail Land Development Authority (RLDA) has floated an online Request for Proposal (RFP) for leasing a vacant land parcel for commercial development at Sawai Madhopur, Rajasthan.  The site is situated near GRP Thana, Platform No-1 side of Sawai Madhopur Railway station. It enjoys excellent connectivity to different parts of the city through the road network.

The site is bounded by a private house, shops and railway quarters in the north, vacant land and railway buildings in the east, a railway station in the south and GRP Thana in the west.

The parcel spans 4000 sq. m with permitted Built-Up Area (BUA) of 8000 sq.m with.  The reserve price for the land parcel is fixed at INR 13.50 Crores for a lease period of 45 years. The online pre-bid meeting was held by RLDA earlier this month, and was attended by a number of developers from Rajasthan and nearby states. The deadline for the online bid submission is 11th February, 2021.

Bound by Banas River in the north and Parbati River in the east, the city is named after Maharaja Madho Singh-I of Jaipur who planned the city. It is home to Ranthambore National Park- a UNESCO World Heritage Site with immense tourist traffic.

Rail Land Development Authority (RLDA) is a statutory body under the Ministry of Railways, for the development of vacant Railway land. It has four key mandates as a part of development i) Leasing of commercial sites ii) Colony redevelopment iii) Station redevelopment and iv) Multi-functional Complex development.

Currently, the Indian Railway has approximately 43,000 hectares of vacant land across India. RLDA has over 84 commercial (greenfield) sites across India for leasing, and the eligible developers for each will be selected through an open and transparent bid process. RLDA is currently working on 62 stations in a phased manner while its subsidiary, IRSDC has taken up another 61 stations.

The railway stations across India will be redeveloped on a PPP Model as a part of Smart City Projects launched by the Government of India. RLDA is currently also handling 84 railway colony redevelopment projects and has recently leased out a railway colony in Guwahati for redevelopment.