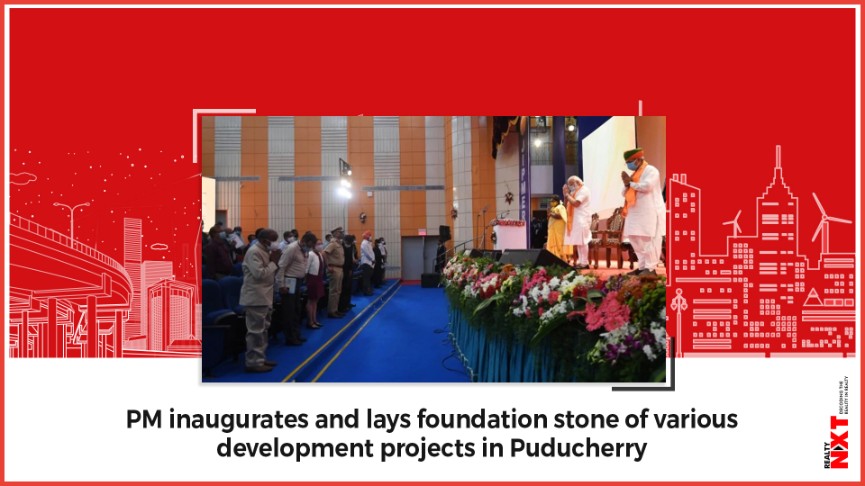 PM remarked that with the coming of good sports facilities to Puducherry, youth from this state can excel in national and global sports meets

The Prime Minister said this land of Puducherry has been home to sages, scholars and poets and also to revolutionaries like Mahakavi Subramania Bharathi and Sri Aurobindo. Admiring Puducherry as a symbol of diversity, he said here people speak different languages, practice different faiths but live as one.

Inaugurating the re-built Mairie Building, the Prime Minister said that the building will add to the beauty of Beach Promenade and attract more tourists.

He said the Government has made several efforts to improve rural and coastal connectivity and the agriculture sector will gain from this. He said that it is the obligation of the Government to ensure their produce reaches good markets in a timely manner and good roads would aid in achieving that goal.

He added the four laning of the road will also add momentum to the economic activity in this area and generate job opportunities for local youth.

The Prime Minister remarked that in the last seven years, India has made many efforts to improve fitness and wellness as economic prosperity is closely linked to good health. In this context, he laid the foundation stone for the 400 meters synthetic athletic track at the sports complex, as a part of the Khelo India scheme.

It will nurture sporting talent among the youth of India. He remarked that with the coming of good sports facilities to Puducherry, youth from this state can excel in national and global sports meets. He said the 100-bed girls hostel constructed at Lawspet inaugurated today would accommodate hockey, volleyball, weightlifting kabaddi and handball players who would be trained under SAI coaches.

The Prime Minister said that healthcare would play a key role in the coming years. In line with the objective of providing quality health care to all, Blood Centre in JIPMER is being inaugurated, which will accommodate advanced facilities for long term storage of blood, blood products and stem cells banking. He added that the facility will function as a research laboratory and a training centre for personnel training in all aspects of transfusion.

The Prime Minister said, to promote quality healthcare, we need quality health professionals. Phase-I project of Medical College Building at Karaikal New Campus is an environmentally friendly complex and will have all modern teaching facilities required for teaching MBBS students.

Laying the foundation of Puducherry Port Development under Sagarmala Scheme, the Prime Minister hoped that once completed, it will help the fishermen who have been using this port for venturing into sea for fishing operations. It will provide much needed sea connectivity to Chennai. This will facilitate the cargo movement for industries of Puducherry and ease load on the Chennai port. It will open up possibilities of passenger traffic among the coastal cities, he said.

He stated that Puducherry has got rich human resources because of various educational institutions present, both in government and private sector. It has potential for a lot of industrial and tourism development that will provide a lot of employment and opportunity. “The people of Puducherry are talented. This land is beautiful. I am here to personally assure all possible support from my Government for the development of Puducherry,” the Prime Minister concluded.