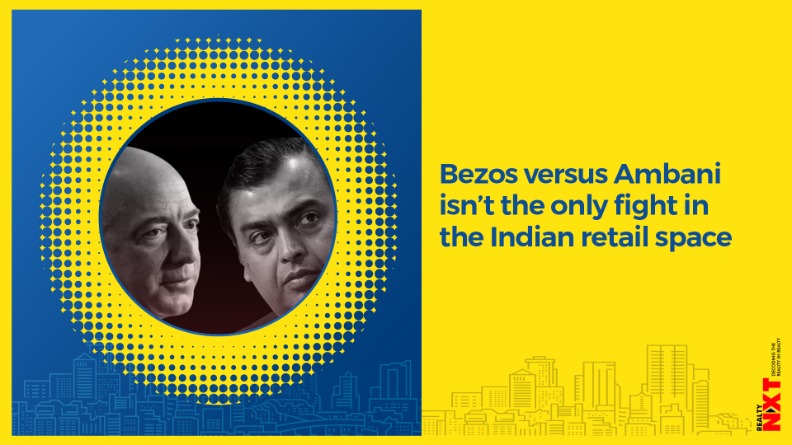 The founder of Future Group took Bezos’s money, but sold his debt-laden business to Ambani when the pressure from the pandemic became too much.

A bruising battle for supremacy between two of the world’s richest men is hogging the limelight, but the silent changes in India’s retail landscape deserve equal attention.

The ongoing digital transformation of the corner Kirana stores, tens of millions of shops catering to 1.3 billion consumers, will matter for everyone from Unilever NV and Procter & Gamble Co. to State Bank of India, the country’s largest lender. It will also be important to Amazon.com Inc. boss Jeff Bezos and Reliance Industries Ltd. Chairman Mukesh Ambani.

The two billionaires are circling each other over an Indian retailer in crisis. The founder of Future Group took Bezos’s money, but sold his debt-laden business to Ambani when the pressure from the pandemic became too much. Amazon is in India’s courts to scuttle the $3.4 billion sale, which could end up making Reliance’s dominance over the consumer economy unshakeable.

Away from this high-profile fight for the ordinary Indian’s wallet, a different contest is shaping up for control of what goes on shop shelves. Reaching small stores in a country of more than 660,000 villages and 8,000 cities and towns has traditionally been an uphill struggle for brands. Even Unilever, which has been in India for almost a century, can barely tap 15% of all retailers directly. It needs wholesalers to boost that reach to 80%-plus, according to investment research and asset management company Sanford C. Bernstein & Co.

The wholesalers rely on their knowledge of (and trust in) retailers in their vicinity. But these relationship-oriented networks are small and expensive. Throwing them wide open with digitization is the big opportunity. Leading the charge is Udaan, a startup that in five years has taken 80% of the business-to-business e-commerce market, delivering goods it stocks in 200 warehouses nationwide to more than 1.7 million retail stores in 900 cities every day.

Suppliers receive their cash on time after Udaan takes their products. Retailers get the credit they would have otherwise obtained at high-interest rates from wholesalers. Everything happens on a smartphone app, which helps small shopkeepers build a history of reliability in payments. Banks and financiers gain the confidence to lend the required working capital, and brands get less convoluted access. From manufacturers and millers to farmers, pharmacists, hotels, restaurants and grocers, the platform has 3 million registered buyers and sellers.

As Vaibhav Gupta, one of Udaan’s three co-founders, says, “We’ve solved the problem of trust on the internet.” The firm is backed, among others, by Lightspeed Venture Partners, an early investor in Snap Inc., and Yuri Milner’s DST Global. It’s one of India’s fastest-growing unicorns, as startups valued at $1 billion or more are known.

Sujeet Kumar, another co-founder, credits some of the success to the 2017 goods-and-services tax. With multiple rates and high compliance costs, GST is a cumbersome consumption tax, but it’s uniform across India. Warehousing decisions that used to be driven by a confusing smorgasbord of local levies are now guided by efficiency.

Mobile internet is undoubtedly the centerpiece. Ambani entered the Indian telecom industry with his 4G network in 2016 and crunched expensive data prices to where they’re the cheapest in the world. The average kirana owner has a smartphone now, and isn’t shy about using it. With a little training, lack of education isn’t a barrier to reshaping sclerotic business practices.

Disruption doesn’t mean aping the West. Kumar and Gupta were part of the team that built Flipkart as India’s answer to Amazon and left it two years before Walmart Inc. bought the e-commerce site for $16 billion. Amod Malviya, their third partner, was Flipkart’s chief technology officer. At Udaan, though, the founders haven’t copied a global template.

That’s because none exists. While affluent e-commerce consumers may have preferences similar to their Western counterparts, the vast majority of price-conscious customers buy everyday items in tiny quantities. “Kitchens and refrigerators are small, and the median buyer of shoes pays 200 rupees ($3),” Gupta says. Since mobile commerce arrived in India before connected desktop computers became a thing, even bigger-ticket purchasing decisions don’t start with elaborate online searches.

Udaan was built for the India its founders grew up in. Kumar arrived at the Indian Institute of Technology in New Delhi from Bhabua, the main town of a dirt-poor district in the penurious eastern state of Bihar (annual per capita income: $630). The distance between Bhabua and Udaan in Bangalore isn’t measured in kilometers or miles, but in decades of progress that mobile internet is trying to squeeze into years. As a supply chain specialist, Kumar isn’t looking to fundamentally alter behavior. He’s simply removing inefficiencies to speed up the flow of capital. This is crucial for retailers who work on 10% to 12% margins, half of what their peers in the West make.

The business-to-consumer side of retail is both deeply political and booby-trapped with regulatory minefields. New Delhi’s noose around foreign-owned e-commerce — Amazon as well as Walmart-Flipkart — is tightening as Prime Minister Narendra Modi pursues a more nationalist economic agenda. Ambani has a clear edge, but Bezos is far from giving up.

Will the kirana become collateral damage in the tycoons’ war? Perhaps not. Even by the end of this decade, when India’s retail market grows to $2 trillion, tripling from when the data revolution was just kicking in, small shops will command a 65% share, in Bernstein’s estimates. However, a little under half of their trade will have gone digital by then.

Startups like Udaan will modernize the back-end. In doing so, they’ll raise the value of the prize that Ambani and Bezos are vying for — by the storefront.