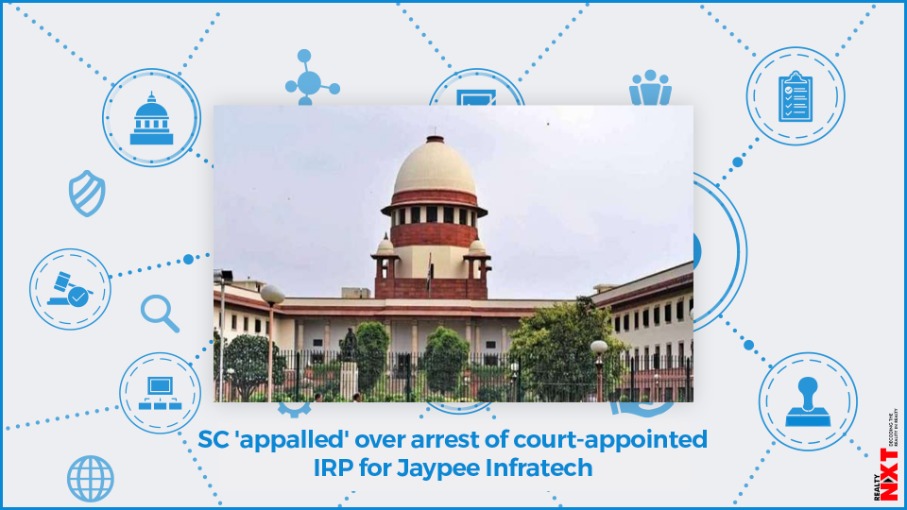 The apex court observed that the police officer dealing with the case is not familiar with the provision of the privilege of interim resolution.

The Supreme Court Tuesday was “appalled” over the arrest of court-appointed Interim Resolution Professional (IRP) for managing the affairs of debt-ridden Jaypee Infratech Limited (JIL) in a criminal case by Uttar Pradesh police and ordered his forthwith release while issuing a show-cause notice to an erring cop.

The apex court observed that the police officer dealing with the case is not familiar with the provision of the privilege of interim resolution appointed by the court under the IBC.

Anuj Jain was appointed by the top court under the Insolvency and Bankruptcy Code (IBC) and was entrusted with the task to ensure functioning of Jaypee Infratech till the resolution process to resurrect the ailing company is decided.

He was arrested on Monday from Mumbai by the Greater Noida police in connection with an FIR alleging that the Jaypee Infratech Limited (JIL), the operator of the 165-kilometer long Yamuna Expressway, and its IRP Anuj Jain have not taken up safety measures suggested by the IIT in its safety audit conducted in 2018 to reduce road accidents.

Ordering Greater Noida police and the magistrate concerned to release Jain without imposing any condition upon receiving its order through e-mail, a bench of Justices A M Khanwilkar and Dinesh Maheshwari asked the office of the Registrar General (Judicial) of the apex court to make a call to the office of the judicial magistrate to ensure immediate compliance.

“We are appalled to see that the manner in which the Uttar Pradesh Police has handled this case emanating from FIR No.0098/2021, registered at Police Station Beta-II in District Greater Noida, including to take the extreme step to arrest the IRP, Anuj Jain, who was working in that capacity pursuant to the order passed by the court and entrusted with the functioning of the company in question,” the bench ordered.

“In the meantime, we direct immediate release of the applicant, Anuj Jain, who is presently in custody of Police Station, Beta-II, District Greater Noida, Uttar Pradesh and had been produced today … before the Court of Chief Judicial Magistrate, Gautam Buddh Nagar,” it said.

The bench expressed surprise over the response of the state government that Investigating Officer, Bijendra Singh, was of the view that the IRP may leave India at any time to avoid the prosecution and for securing his presence thought it necessary to arrest him from Mumbai.

“We will examine this aspect of the matter elaborately at the appropriate time by treating this application as substantive writ petition filed by the applicant under Article 32 of the Constitution of India and to be numbered accordingly,” it ordered.

“We further direct the Investigating Officer not to take any coercive action against the applicant in connection with the subject F.I.R. until further orders,” it ordered.

Issuing notice to IO Bijender Singh, the bench asked as to why appropriate action be not taken against him for taking such “drastic action” against Jain.

“He shall file his personal affidavit explaining the position within two weeks from today. List the writ petition after two weeks,” it said.

During the hearing, it took the submissions of senior advocate Parag Tripathi and Siddharth Luthra, appearing for the IRP, that the role of the IRP and the statutory rights and privileges available to him were not taken note of by the state police.

How can the IRP be held criminally liable for not spending Rs 115 crore for constructing “crash barriers” on the Yamuna expressway, they argued.

Earlier, the apex court on August 6, 2020, had transferred to itself the appeals pending before the National Company Law Appellate Tribunal (NCLAT) against the NBCC plan to acquire debt-ridden JIL and construct over 20,000 pending flats.

The top court had said that all the appeals before NCLAT and the apex court will be heard together to avoid further delay in the execution of the scheme.