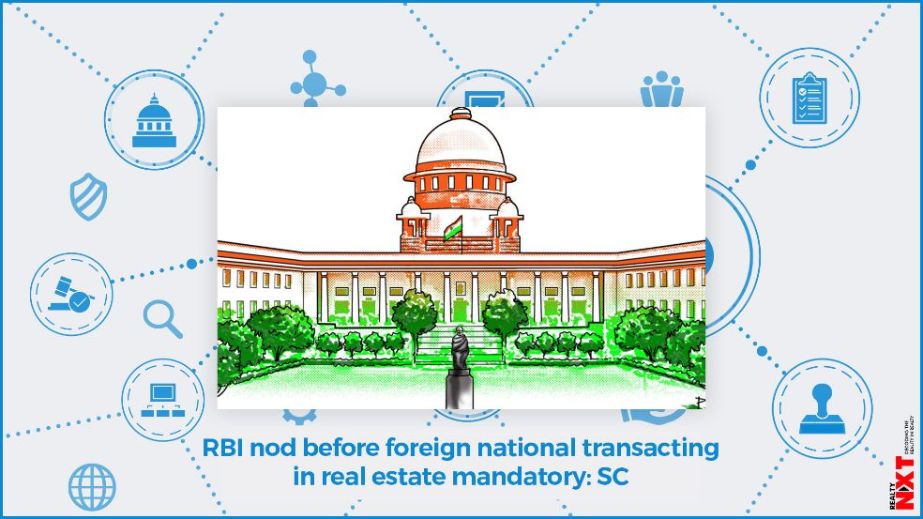 The Supreme Court was gave the verdict on February 26 dealing with a suit property, measuring 12,306 square feet at Bengaluru

The Supreme Court has held that the condition predicated in Section 31 of the 1973 Act of obtaining “previous” general or special permission of the RBI for transfer or disposal of immovable property situated in India by sale or mortgage by a person, who is not a citizen of India, is mandatory.

“Until such permission is accorded, in law, the transfer cannot be given effect to; and for contravening with that requirement, the concerned person may be visited with penalty under Section 50 and other consequences provided for in the 1973 Act”, said order of the Supreme Court by a bench presided by Justice A.M. Khanvilkar.

“Hence, the Trial Court as well as the High Court committed manifest error in dismissing the suit filed by the plaintiff for a declaration in respect of suit property admeasuring 12,306 square feet and for consequential reliefs referred to therein,” it added.

“A priori, we conclude that the decisions of concerned High Courts taking the view that Section 31 of the 1973 Act is not mandatory and the transaction in contravention thereof is not void or unenforceable, is not a good law,” Supreme Court said.

However, transactions which have already become final including by virtue of the decision of the court of competent jurisdiction, need not be reopened or disturbed in any manner because of this pronouncement, the order said.

“This declaration/direction is being issued in exercise of our plenary power under Article 142 of the Constitution of India. For, there has been a paradigm shift in the general policy of investment by foreigners in India and more particularly, the 1973 Act itself stands repealed. Accordingly, we deem it appropriate to overrule 45 the decisions of the High Courts, taking contrary view, albeit, prospectively,” the order said.

The Supreme Court observed that the contrary decisions of High Courts have completely missed the legislative intent and the spirit of enactment of Section 31, as is manifest from the statement of the then Finance Minister while tabling the Bill in the Lok Sabha that as a general policy foreign national cannot be allowed to deal with real estate in India.

“Besides that clear indication, the legislative scheme impels us to take a view which is reinforced from conjoint reading of Section 31 along with Sections 47, 50 and 63,” it said.

“In our opinion, the requirement of seeking previous general or special permission of the RBI in respect of transaction covered by Section 31 of the 1973 Act is mandatory. Resultantly, any sale or gift of property situated in India by a foreigner in contravention thereof would be unenforceable in law,” the judgement said.

The Supreme Court was gave the verdict on February 26 dealing with a suit property, measuring 12,306 square feet at Bengaluru, which was gifted in March 1977 by the widow of Charles Raitt, a foreigner and owner to Vikram Malhotra, without obtaining previous permission of the RBI.