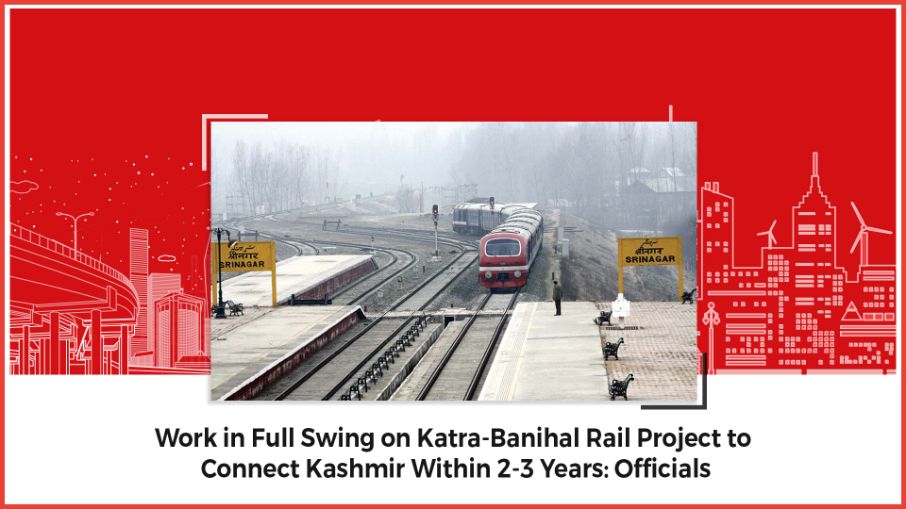 The 111-km-long Katra-Banihal section is under construction, a railway official said.

Work on the Rs 21,653-crore rail project connecting Kashmir with rest of the country is expected to be completed within two to three years in accordance with Prime Minister Narendra Modi’s announcement, a senior official said here.

General Manager, Northern Railway, Ashutosh Gangal also said there was no issue of seepage in the tunnels under construction as they are horseshoe-shaped to allow water to drain out.

The Udhampur-Srinagar-Baramulla Rail Link (USBRL) Project, the most challenging railway infrastructure project being undertaken after Independence, has missed several deadlines amid huge cost escalations since 1997, when the then Prime Minister H D Deve Gowda laid its foundation at Udhampur.

“When you have a project of this magnitude, you come across various technical challenges and you need to improve knowledge and look for alternative ways to complete it,” Gangal said when asked about the delays.

He said the project was a learning process for the Railways and “now we have come to a stage where we are confident that we will complete the project as per the prime minister’s declaration … possibly in two and a half years”.

Gangal and other senior railway officers were at Kauri in this hilly district of Jammu and Kashmir to witness the completion of the arch construction on the world’s highest railway bridge, which soars 359 metres above the bed of the Chenab river.

It has been described by the Northern Railways as a ”milestone”.

A short film by the Railways on the achievement also highlighted the prime minister’s message that the transporter was making all-out efforts to connect the Valley with rail lines in the next two to three years.

Asked about the seepage issue in some tunnels, he said, “It is an issue in one or two tunnels in the Udhampur-Katra section.”

“We have modified the construction to horseshoe-type to drain out the water. There will be no seepage issue in the tunnels (between Katra-Banihal section),” Gangal said, adding, “In a few old tunnels, seepage was an issue, and we are taking necessary measures to address the problem.”

Of the 272-km-long USBRL project, 161 km was commissioned in phases. The 118-km-long Qazigund-Baramulla section commissioned in October 2009, followed by the 18-km-long Banihal-Qazigund in June 2013 and the 25-km-long Udhampur-Katra in July 2014.

The 111-km-long Katra-Banihal section is under construction, a railway official said.

“This project has many firsts. We have the longest railway tunnel with an overall length of 12.75 km, the highest railway bridge in the world which is higher than the Eiffel Tower of Paris, the first cable-stayed bridge, which when completed will be an engineering marvel of the 21st century,” he said.

About the progress of work on tunnels, he said out of a total 97.64 km, 84.39 km stands completed on the main tunnels.

He said the construction of over 205-km network access roads stands completed.

About the longest railway tunnel (tunnel number 49) between Sumber station yard and Arpinchala station yard, the official said out of a total 12.75 km, work on 11.21 km was completed. Another major tunnel of 11.21 km in Qazigund section was already completed and commissioned.

“Eighty-seven per cent length of Katra-Banihal section is in tunnels and the world’s most advanced and modern technology is being used for planning and construction,” he said.

He added that Anji bridge, the first cable-stayed bridge, was being constructed over Anjikhad, a tributary of river Chenab.