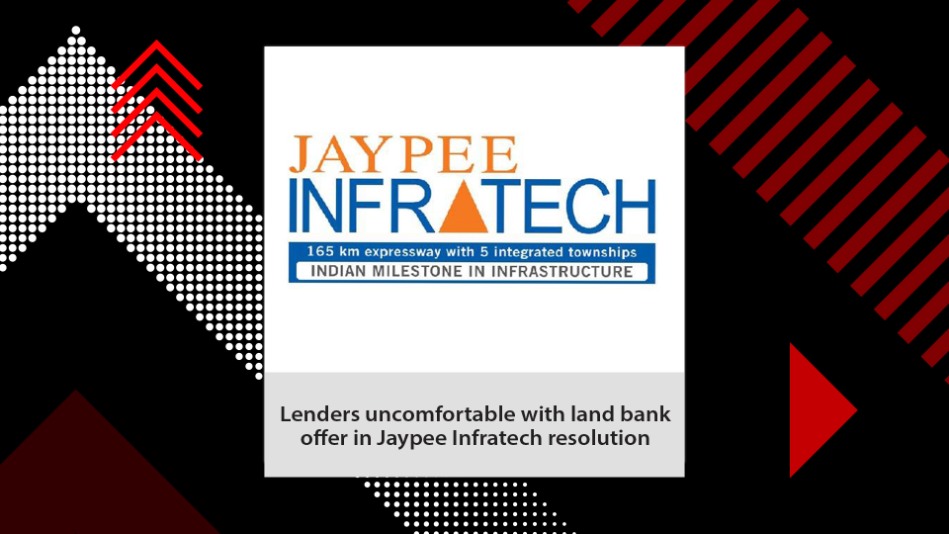 Lenders of Jaypee Infratech have asked state-owned NBCC to take the government’s approval for the revised bid that it has submitted to acquire the bankruptcy-bound real estate firm.

NBCC, which offered 1,526 acre of land to lenders, has also been asked to give the break-up and locations where these land parcels are situated in Noida and Greater Noida, Uttar Pradesh.

Last week, NBCC and Mumbai-based Suraksha group submitted their revised bids to acquire debt-laden Jaypee Infratech through an insolvency process, as per the direction of the Supreme Court.

Last month, the Supreme Court remitted to the Committee of Creditors (CoC) the approval issue of resolution plan for Jaypee Infratech Ltd (JIL), saying no new expression of interest will be entertained for taking over the firm, and only NBCC and Suraksha Realty could file revised proposals.

The apex court also directed to extend the resolution process by 45 days.

In a meeting of the CoC, held on Monday, both NBCC and Suraksha group gave presentations on their new resolution plans, sources said.

During the meeting, lenders asked NBCC to take the government’s approval as well as the fair trade regulator nod on the bid, they added.

The sources said lenders will seek written clarifications from both the parties and may even ask both the bidders to make changes in their resolution plans.

This is the fourth round of the bidding process in the matter of Jaypee Infratech, which went into an insolvency process in August 2017.

According to the sources, the bids were opened on Thursday.

NBCC and Suraksha have made some changes in their plans in view of the apex court direction to return Rs 750 crore with accrued interest to Jaiprakash Associates Ltd (JAL), the promoter group of Jaypee Infratech, after reconciliation of accounts between JAL and JIL, the sources said.

NBCC has offered 1,526 acres of land to lenders under a land-debt swap deal and Rs 10 crore as equity contribution, they added.

On Yamuna Expressway, NBCC had proposed to offer 82 per cent equity in the road asset to lenders and it will retain an 18 per cent share.

Meanwhile, Suraksha has offered 2,040 acres to lenders worth Rs 7,500 crore, according to the sources.

Suraksha will also infuse Rs 250 crore as equity in two tranches for construction, they said.

NBCC and Suraksha have proposed to complete around 20,000 pending flats in housing projects launched by Jaypee Infratech in Noida and Greater Noida (Uttar Pradesh).

The order was, however, challenged in the NCLAT and later in the Supreme Court.

Jaypee Infratech went into the insolvency process in August 2017 after the NCLT admitted an application by an IDBI Bank-led consortium.

Anuj Jain was appointed as an IRP to conduct the insolvency process and also manage the affairs of the company.

In the first round of insolvency proceeding, the Rs 7,350-crore bid of Lakshadweep, part of Suraksha Group, was rejected by lenders.

The CoC rejected the bids of Suraksha Realty and NBCC in the second round held in May-June 2019.

The matter then reached the National Company Law Appellate Tribunal (NCLAT) and then the apex court.

On November 6, 2019, the Supreme Court directed the completion of Jaypee Infratech”s insolvency process within 90 days and ordered that the revised resolution plan be invited only from NBCC and Suraksha Realty.

In December 2019, the CoC comprising 13 banks and around 21,000 homebuyers, approved the resolution plan of NBCC with a 97.36 per cent vote in favour in the third round of the bidding process.

Buyers have 57.66 per cent voting rights, fixed deposit holders 0.13 per cent and lenders 42.21 per cent. For a bid to be approved, 66 per cent of votes were required.