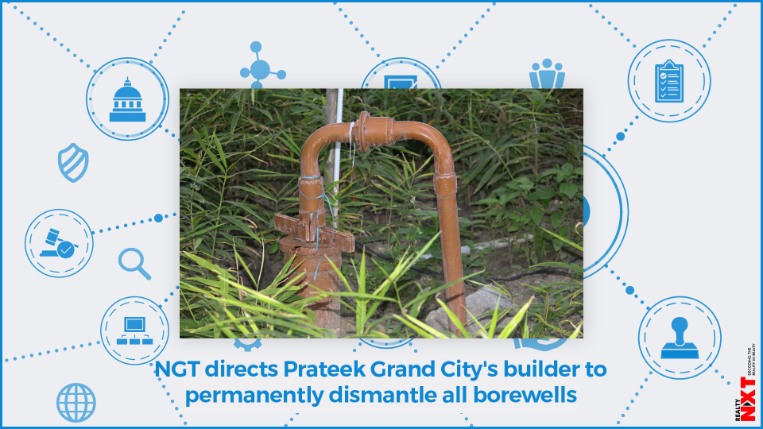 The tribunal was hearing a plea filed by Rajpal Singh Kandhari and others against illegal extraction of ground water for the project Prateek Grand City in Siddhartha Vihar, Ghaziabad.

The National Green Tribunal has directed a builder in Ghaziabad to permanently dismantle all borewells and banned use of potable water for construction. A bench headed by NGT Chairperson Justice Adarsh Kumar Goel passed the order after perusing a report filed by a committee which found that there are illegal tube wells and fresh ground water was being used in the construction activity instead of using treated water.

“We do not find any reason not to accept the report. Accordingly, we direct further action in terms of the above report. We also direct that the same Committee may make assessment of the compensation within one month, following due process of law.

“If the compensation is not paid within reasonable time, the State PCB may take coercive measures, including suspending the Consent under the Water (Prevention and Control of Pollution) Act, 1974 and the Air (Prevention and Control of Pollution) Act, 1981. The sealing of illegal borewells may be ensured by the District Magistrate, Ghaziabad,” the bench said.

The tribunal was hearing a plea filed by Rajpal Singh Kandhari and others against illegal extraction of ground water for the project Prateek Grand City in Siddhartha Vihar, Ghaziabad.

According to the plea, ground water extraction is in violation of Central Ground Water Authority Guidelines, 2015 and the Project Proponent has dug numerous borewells.

The area is critical in terms of ground water availability and there is toxic contamination in the ground water, the plea said, adding that no permission for extraction of ground water has been or can be granted except for drinking purposes.

The Environmental Clearance (EC) for the project is subject to the condition that ground water will not be extracted for construction, it said.