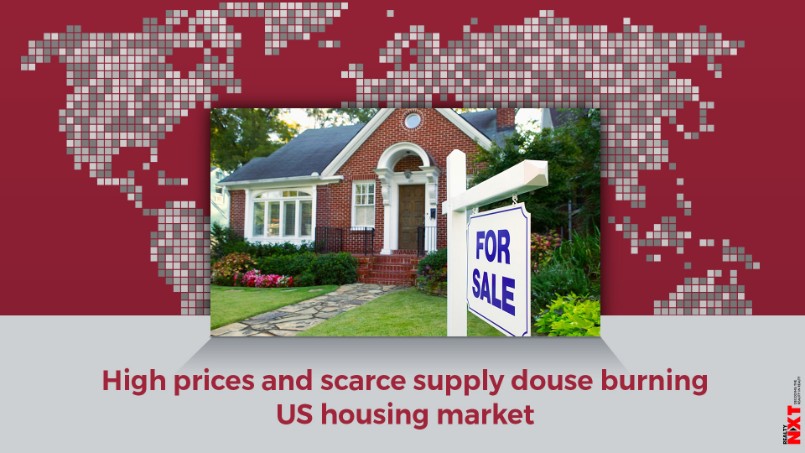 Sales of new and existing homes began falling in April, as prices continued climbing despite homebuilders rushing to keep up with demand, data said.

The boom in US real estate was one of the more unusual side effects of the Covid-19 pandemic, but government and industry data released in recent days show sales are on a downward slope, a consequence of the economy’s recovery and a shortage of homes to buy.

Sales of new and existing homes began falling in April, as prices continued climbing despite homebuilders rushing to keep up with demand, data said.

While the market may stabilize in the months to come, analysts believe the real estate sector is set for a pause.

“The story here probably is a combination of fading Covid-induced demand for homes outside cities and/or bigger homes in the suburbs, coupled with the impact of higher mortgage rates and tighter lending standards,” Ian Shepherdson of Pantheon Macroeconomics said.

The latest evidence of the cooling came on Tuesday, when the Commerce Department reported new home sales fell 5.9 percent last month from March, amid high prices and tight supply.

A similar dynamic was seen in the larger market for existing home sales, which declined 2.7 percent in April, the National Association of Realtors (NAR) said last week, while the median existing-home price hit an all-time high.

In consumer confidence data released Tuesday, The Conference Board said only 4.3 percent of consumers surveyed in May expected to buy a home in the next six months, down about three percentage points from the month prior.

“Higher prices and a better health backdrop could be motivating homeowners to come to market,” Rubeela Farooqi of High Frequenecy Economics said of the existing homes sales data.

“Even so, a lack of availability and affordability concerns will likely be headwinds until supply constraints ease.”

– Unintended consequences – Despite tens of millions of people losing their jobs as the Covid-19 pandemic struck the United States, the housing market rebounded sharply from an initial slump, supported by people who could afford it seeking out new digs with offices closed across the country.

They were aided by the Federal Reserve’s emergency move to slash its benchmark lending rate to zero.

The pace of new and existing home sales are now both above their pre-pandemic highs, but supply has dwindled to 4.4-months and 2.4-months, respectively, at the current sales rate, according to data.

While inventory has shown signs of improving as the shortage worsened over the winter, prices are nonetheless skyrocketing, with the median existing home price at $341,600 in April, 19.1 percent higher than the same month last year, NAR said.

That increase “was last exceeded more than 15 years ago in December 2005, and lies very comfortably in the top decile of historical performance,” said Craig J. Lazzara, managing director and global head of index investment strategy at S&P Dow Jones Indices.

“These data are consistent with the hypothesis that Covid has encouraged potential buyers to move from urban apartments to suburban homes,” he said, adding that whether this represents a permanent shift in housing preferences remains to be seen.

The real estate market is a major driver of the US economy, but economist Joel Naroff said there’s no sign yet of the bubble that preceded the 2008-2010 global financial crisis.

That, however, does not mean the current combination of low supply and high prices won’t keep buyers away.

“The rapidly rising prices are starting to impinge on affordability and if mortgage rates rise as inflation accelerates, then some buyers, especially first-time home buyers, could be forced out of the market,” he said.

“The market is likely to decelerate, not burst, and if that happens, the impact on the economy will not be major.”