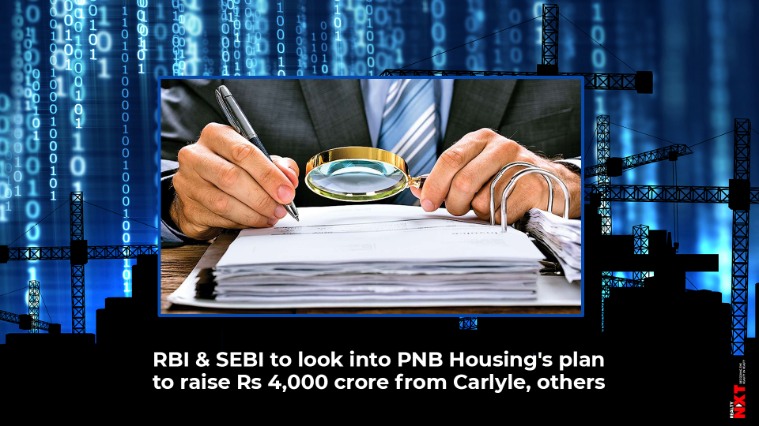 Currently, PNB as a promoter holds 32.64 per cent stake in PNB Housing Finance.

Reserve Bank of India as well as Sebi will look into various regulatory issues related to the proposed Rs 4,000 crore-investment by US-based private equity firm Carlyle and others in PNB Housing Finance, sources said on Monday.

Last month, the board of PNB Housing Finance cleared a proposal to raise up to Rs 4,000 crore by issuing preference shares and convertible warrants to Carlyle Group firms and other entities.

According to the sources, concerns of minority shareholders, corporate governance and others regulatory aspects would be looked into by RBI and Securities and Exchange Board of India (Sebi).

Earlier this year, RBI had shot down a proposal of Punjab National Bank (PNB) to infuse capital into its subsidiary PNB Housing Finance through a rights issue on concerns of the lender’s financial health.

About the proposed deal, PNB Managing Director and CEO S S Mallikarjuna Rao, earler this month, said the bank will neither be investing nor divesting its stake but because of investment from other sources, its shareholding could come down to around 21 per cent.

Currently, PNB as a promoter holds 32.64 per cent stake in PNB Housing Finance.

PNB Housing Finance’s Extraordinary General Meeting (EGM) is scheduled to be held on June 22 to seek shareholders’ approval for the preferential allotment of shares on a private placement basis to Carlyle and other entities, besides other proposals.

The proposal is to allot a total of 8,20,51,281 equity shares and 2,05,12,820 warrants exchangeable into equity shares for Rs 390 per share/ warrant to Pluto Investments S.a r.l, Salisbury Investments Pvt Ltd, General Atlantic Singapore Fund FII Pte Ltd and Alpha Investments V Pte. Ltd in specified proportions. These securities would be allotted for a cash consideration aggregating to around Rs 4,000 crore.

Besides, existing shareholders of the company, the funds managed by Ares SSG and General Atlantic will be participating in the capital raise, along with Salisbury Investments, the family investment vehicle of Aditya Puri, Senior Advisor for Carlyle in Asia. He is also the former CEO and MD of HDFC Bank.

Once the deal is completed, the stake of Carlyle Group in the mortgage firm will rise to 50.16 per cent from 32.21 per cent, a development that would trigger open offer.

The Carlyle Group along with other entities on Monday floated a “draft letter offer” with regard to an open offer for acquisition of over 7 crore equity shares representing 26 per cent stake in PNB Housing Finance.

An open offer is a mandatory offer that an acquirer and Persons Acting in Concert (PACs) have to make to the shareholders of a company in case the former acquires more than 25 per cent stake in the company, as per Sebi regulations. In case of creeping acquisition too, the clause of open offer kicks in when an entity or PACs makes an acquisition of more than 5 per cent stake in a company in a year.

Meanwhile, there are reports of conflict of interest of directors on the board of PNB Housing Finance as they have some direct or indirect connection with Carlyle.

While his remuneration in SBI Card was Rs 66 lakh for 2018-19, PNB Housing Finance hired him at a fixed salary of Rs 1.91 crore and a performance-linked variable pay of Rs 1.4 crore. The board decided to pay a minimum of Rs 1.12 crore of variable pay for the first year.

When contacted, PNB Housing Finance said the company is currently occupied with the preparations related to its EGM later this month and hence would not be able to comment on conflict of interest issues.

However, in a statement later in the day, the company said it followed due process in all appointments and has followed similar stringent norm in appointment of MD and CEO.

“All directors of the company are obliged to periodically disclose all their ongoing engagements within the company as strictly mandated against laid out compliance norms under the law. We don’t see any conflict of interest in any appointment,” the statement said.

Earlier this month, proxy advisory firm SES flagged concerns about the proposal to re-appoint Nilesh S Vikamsey and Chandrasekaran Ramakrishnan as Independent Directors (IDs), giving a rationale that their re-appointment is not in accordance with law.

As per the company’s factsheet available on its website, both Vikamsey and Ramakrishnan are IDs. They were re-appointed by PNB Housing Finance’s board and the re-appointment was subject to shareholders’ approval.

The proposal for their re-appointment as directors through a special resolution is part of the agenda of the EGM to be held on June 22.

SES said that their first five-year tenure of Ramakrishnan and Vikamsey as IDs ended on October 6, 2020 and April 21, 2021, respectively.

Under the Companies Act, a person cannot be re-appointed as an ID unless a special resolution is passed by shareholders in a general meeting.

In the current instance, as their tenure ended in October and April, they have ceased to be the IDs in PNB Housing Finance board and such an approval should have been taken on or before October 6, 2020 and April 21, 2021.

SES report also said the proposed deal was an ‘unfair transaction’ which is against public shareholders as well as the promoter bank PNB.

It further said the open offer is a mere formality given the present market price. “It is highly unlikely that any shareholder would tender their shares,” the report added.

On Monday, before the markets opened for trading, BSE and NSE sought some clarifications from PNB Housing Finance on the proposed deal and have asked to submit pricing certificate from a registered valuer.

Valuation certificate to be comprehensive and to take into account various methodologies along with justification, to arrive at the valuation, according to the exchanges.

Till late evening, the company had not responded to the queries.

Shares of PNB Housing Finance closed at Rs 776.85 apiece on BSE, down 5 per cent from the previous close.