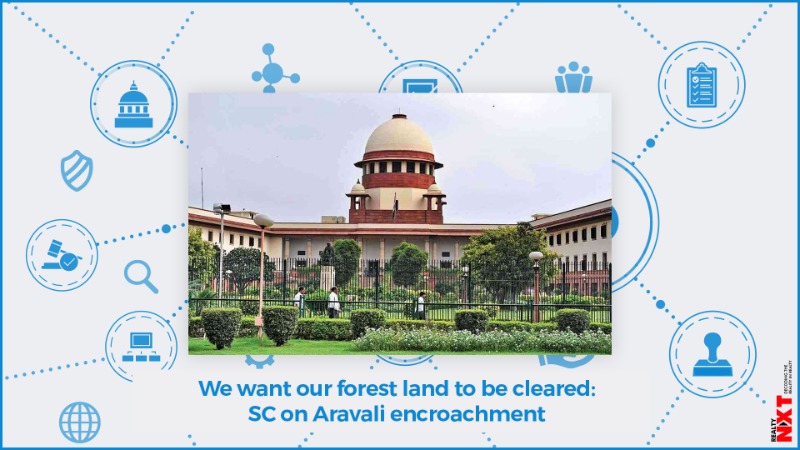 The apex court observed that people there can produce their documents for identification and rehabilitation to the corporation.

“We want our forest land to be cleared”, the Supreme Court said on Thursday while refusing to stay its direction asking Haryana and the Faridabad municipal corporation to remove encroachments, consisting around 10,000 residential constructions, in Aravali forestarea near Khori village.

A bench of Justices A M Khanwilkar and Dinesh Maheshwari asked the state and the civic body to comply with its June 7 direction in this regard.

The apex court, while hearing a separate plea on the issue on June 7, had directed the state and the Faridabad municipal corporation to remove “all encroachments” in the Aravali forest area, saying “land grabbers cannot take refuge of rule of law” and talk of “fairness”.

It had also sought compliance report from the state government officials after removing all encroachments from forest land near Khori village in Faridabad district within six weeks.

During the hearing conducted through video-conferencing on Thursday, advocate Aparna Bhat, appearing for the petitioners who have sought stay on demolition of these structures, said there are around 10,000 families in the village.

“Please don’t give us numbers. It makes no difference. We want out forest land to be cleared,” the bench said, adding, “We have given enough time. The notification was issued but you continued there at your own risk”.

“This is forest land. This is not ordinary land,” the bench observed.

Bhat argued about rehabilitation and said that state authority has not taken up the issue of eligibility and identification process has not been done.

The bench referred to its April 5 order, passed in a matter related to the issue, and said the civic body will take steps in accordance with law.

“You have to evict them in accordance with law. You have to give benefit of scheme (of rehabilitation) to those who are eligible,” the bench told the counsel appearing for the municipal corporation.

Bhat argued that authority has come there to forcibly evict those who are living there and before the demolition, they should do the exercise of verification.

The bench, while asking whether the petitioners have given additional documents to the corporation for verification, observed that enough time was already given earlier.

“Look at these people and their situation. They are migrant labourers. There are children,” Bhat said and also referred to the COVID-19 pandemic situation.

“That is for the state to do. We are only concerned with vacation of forest area. We have given enough time earlier,” the bench observed.

The apex court observed that people there can produce their documents for identification and rehabilitation to the corporation.

The bench said that no indulgence can be shown at this stage.

It noted that petitioners were obligated to produce documents before the corporation for the rehabilitation scheme and they have failed to do so.

The bench said that clearance of encroachment on forest land would be done by following the due process of law.

It said the state and the corporation may proceed on the basis of the commitment given to the court on earlier occasion.

It said that larger issues related to the matter are pending and it would take up the plea on July 27.

The bench made it clear that pendency of the plea would not come in the way of the authorities in removing unauthorised structures made on forest land.

At the fag end of hearing, the counsel appearing for Haryana, said there are incidents of stone pelting when demolition work is carried out and some directions be given so that the process is peaceful.

“You know what you have to do. We don’t want to say on this. We want our order to be complied with,” the bench said.

The top court had passed the June 7 order after hearing a separate plea filed by five alleged encroachers against the demolition drive of civic body.

The apex court had then said that relief claimed by petitioners in the plea “can be considered de-hors compliance of the directions given on earlier occasions by this court in orders dated February 19, 2020 and April 5, 2021 respectively”.

It had said that secretary of the state forest department shall also “cause to verify the factual situation regarding encroachments on the subject forest land and submit independent compliance report under his signature”.

“After those certificates are submitted within six weeks as aforesaid, the court may consider of passing further directions including regarding due verification of factual statement recorded in the certificates through an independent agency,” the bench had said and made clear that state may consider the plea of rehabilitation independently.

It had said the state and local police shall give necessary logistical support to enable the corporation to implement the directions given by court to “evict the occupants/encroachers including by forcible eviction from the subject forest land and to clear all the encroachments therefrom.”

It had said that Superintendent of Police, Faridabad, shall be personally responsible for ensuring adequate logistical support and police protection to the officials of corporation.