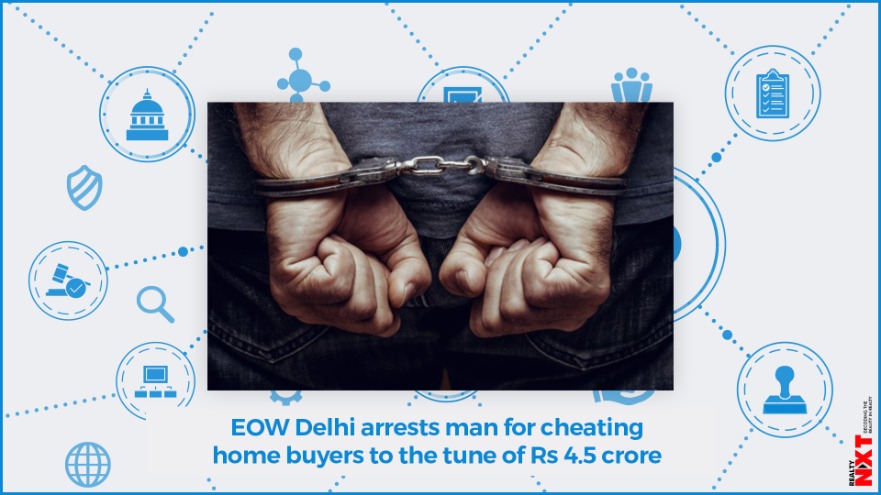 Singh said that a case was registered on the complaint of Rachit Chawala and 12 others in which they alleged that they were introduced to Balaji Buildserve Pvt. Ltd.

The Economic Offences Wing (EOW) of the Delhi Police on Tuesday said that it has arrested Siddharth Barmecha for duping home buyers to the tune of Rs 4.5 crore. R.K. Singh, additional commissioner of Police, EOW, said that it arrested Barmecha in connection with a case it registered in 2017.

Singh said that Barmecha along with Sachin Dutta entered into an agreement to sell with original allottee, Raj Hans Pvt Ltd, for a plot of land inspite of the fact that the plot cannot be transferred before making full payment of lease amount. He said that later on the land was cancelled on account of non-payment of authority dues in 2015.

“Barmecha collected about Rs 4.5 crore from the innocent home buyers on assurance of providing plots,” the official said, adding that during a probe notices had been issued to Barmecha to join investigation and he was non-cooperative and evasive in his replies. “After sustained interrogation he was arrested and further investigation is in progress,” Singh said.

Singh said that a case was registered on the complaint of Rachit Chawala and 12 others in which they alleged that they were introduced to Balaji Buildserve Pvt. Ltd. who were developing a project in name of ‘Azalea OPUS Point’ in Vasundhra in Ghaziabad through a real estate broker company namely Neobricks Consulting Private Limited.

The complaint said that in April 2012 the complainants came in contact with Sachin Dutta who induced them to book or invest money in the project by claiming that they have all the requisite approvals to start a group housing project on the said land.

He said that the complainants were further induced by Barmecha that the project will be completed on time within 3 years. Thereafter all of them had made total payment of Rs 1.29 crore between July 2012 to January 2013 to the company as booking amount for their flat.

“Thereafter in April 2013, it was found by the complainants that the construction of the said project was not in progress. That builder has neither started any construction nor returned the amount to them,” the complaint stated.

The official said that during investigation, information was collected from UP Awas Vikas Parishad, which shows that the plot was allotted to one Raj Hans Towers Pvt Ltd. He said that Balaji Buildserve Pvt Ltd through its director Sachin Dutta had entered into an agreement to sell the plot without permission from the authority. He said that later on plot was cancelled in 2015 by the authority due to non-payment of lease amount.