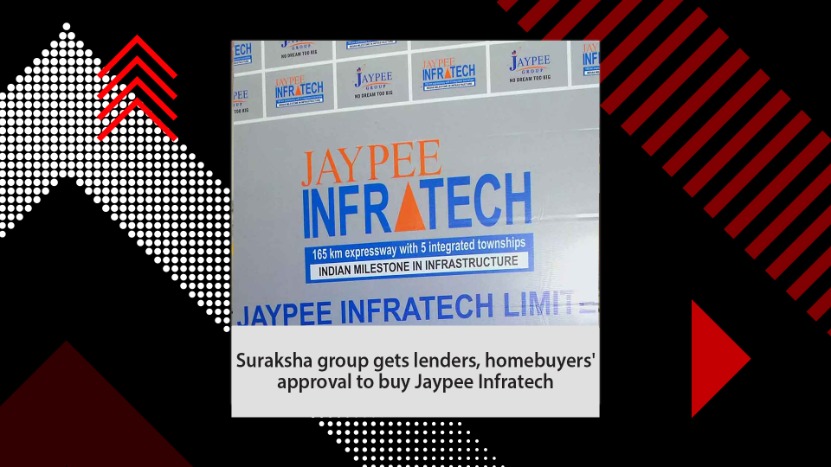 Suraksha group had offered to bankers over 2,500 acres of land and nearly Rs 1,300 crore by way of issuing non-convertible debentures.

Mumbai-based Suraksha group on Wednesday received the approval of financial creditors and homebuyers to takeover debt-laden Jaypee Infratech Ltd (JIL), a development that raises hopes for homebuyers in getting possession of their flats after many years of delay.

The 10-day-long voting process on the takeover proposals submitted by NBCC and Suraksha group ended on Wednesday afternoon. More than 98 per cent of the votes were in favour of Suraksha group’s bid.

This is the fourth round of bidding process to find a buyer for JIL, which went into Corporate Insolvency Resolution Process (CIRP) in August 2017.

A successful resolution of JIL will provide a big relief to over 20,000 homebuyers across various housing projects launched by the realty developer in Noida and Greater Noida (Uttar Pradesh).

Lenders have submitted a claim of RS 9,783 crore.

At least 66 per cent votes are required for the approval of a bid. After the CoC approval, Suraksha group’s offer has to be cleared by the National Company Law Tribunal (NCLT).

Suraksha group had offered to bankers over 2,500 acres of land and nearly Rs 1,300 crore by way of issuing non-convertible debentures.

On June 10, the CoC decided to put to vote the final resolution plans of Suraksha Realty Ltd along with Lakshdeep Investments and Finance Pvt Ltd (Suraksha group) and NBCC (India) Ltd for acquiring JIL under the Insolvency and Bankruptcy Code (IBC).

The e-voting process for the offers commenced on June 14.

JIL went into the insolvency process in August 2017 after the NCLT admitted an application by an IDBI Bank-led consortium.

In the first round of insolvency proceeding, the Rs 7,350-crore bid of Lakshadweep, part of Suraksha group, was rejected by lenders. The CoC had rejected the bids of Suraksha Realty and NBCC in the second round held in May-June 2019.

The matter reached the National Company Law Appellate Tribunal (NCLAT) and then the apex court.

In November 2019, the Supreme Court directed that the revised bids be invited only from NBCC and Suraksha.

Then, in December 2019, the CoC approved the resolution plan of NBCC with a 97.36 per cent vote in favour during the third round of the bidding process.

In March 2020, NBCC had got approval from the NCLT to acquire JIL. However, the order was challenged before the NCLAT and later in the Supreme Court, which on March 24 this year, ordered that fresh bids should be invited only from NBCC and Suraksha.