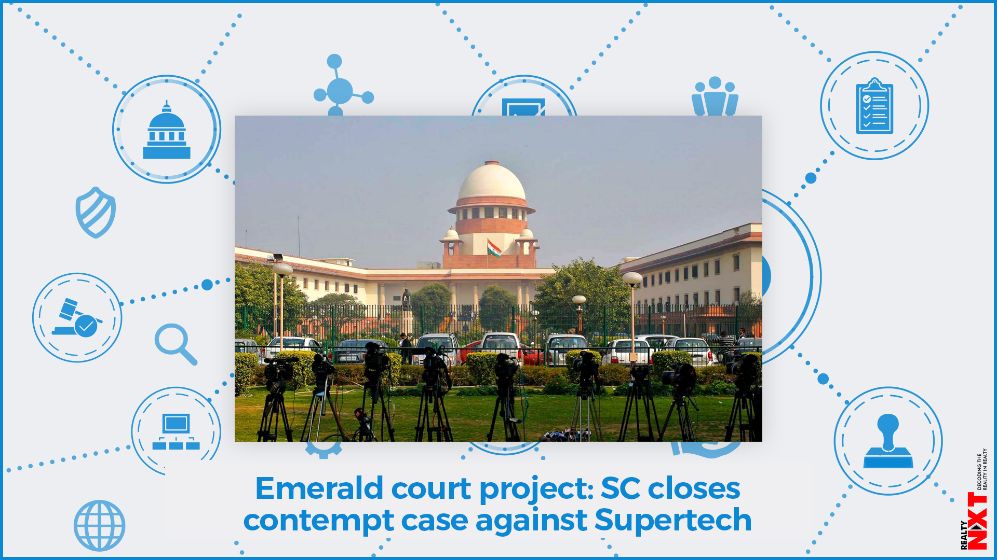 The Supreme Court on Friday closed a contempt case against a real estate firm Supertech Ltd after the company informed that it has refunded the amount to some of the homebuyers, who had booked flats in its Emerald court project at Noida in Uttar Pradesh, whose demolition was ordered by the Allahabad high court.

A bench of Justices DY Chandrachud and MR Shah noted that the appeal of the Supertech has been pending since 2014 and fixed the matter for final disposal next week.

Senior advocate Gaurav Agrawal, who has been appointed Amicus Curiae in the matter, said that the only question which remains to be decided is whether the permission granted by NOIDA authority for construction was legal or not.

Counsel appearing for Supertech, said that the court will have to examine whether the height of the towers which was increased from 73 meter to 120 meter was legal or not.

He said that the company in compliance with various orders of the court has deposited over Rs 50 crore with the apex court registry.

The bench, after noting the compliance of its earlier orders, closed a contempt case filed by home buyers and posted the matter for final hearing next week.

The two towers, Apex and Ceyane, together have 857 apartments. Of these, about 600 flats have already been sold. The towers are a part of Supertech’s Emerald Court project.

The company has claimed that the two towers were constructed as per approved building plans and there was no violation of any kind.

Several home buyers subsequently moved the top court seeking refund of the amount they deposited with the company for their flats or direction for timely completion of their homes by the company.

On April 11, 2014 the Allahabad High Court ordered the demolition of the two buildings and the refund of money to apartment buyers.

The high court judgement was passed while allowing a writ petition of the Emerald Court Owners Resident Welfare Association, which alleged that the approval and construction of the two towers was “in complete violation of the UP Apartment Acts”.

The high court had ordered the demolition of the two towers erected in Sector 93-A of Noida as part of the Supertech Emerald Court Complex “within a period of four months.” The complex comprises residential premises and shopping establishments.

The court also ordered that money be refunded to all those who had invested in the two towers “with 14 per cent interest compounded annually”.

The petitioner before the High Court had claimed the Noida Authority had given permission to raise the height of the two towers, which were earlier supposed to have only 24 floors, “without maintaining the mandatory distance of 16 metres) from an adjoining building block, making it unsafe”, apart from blocking air and light.