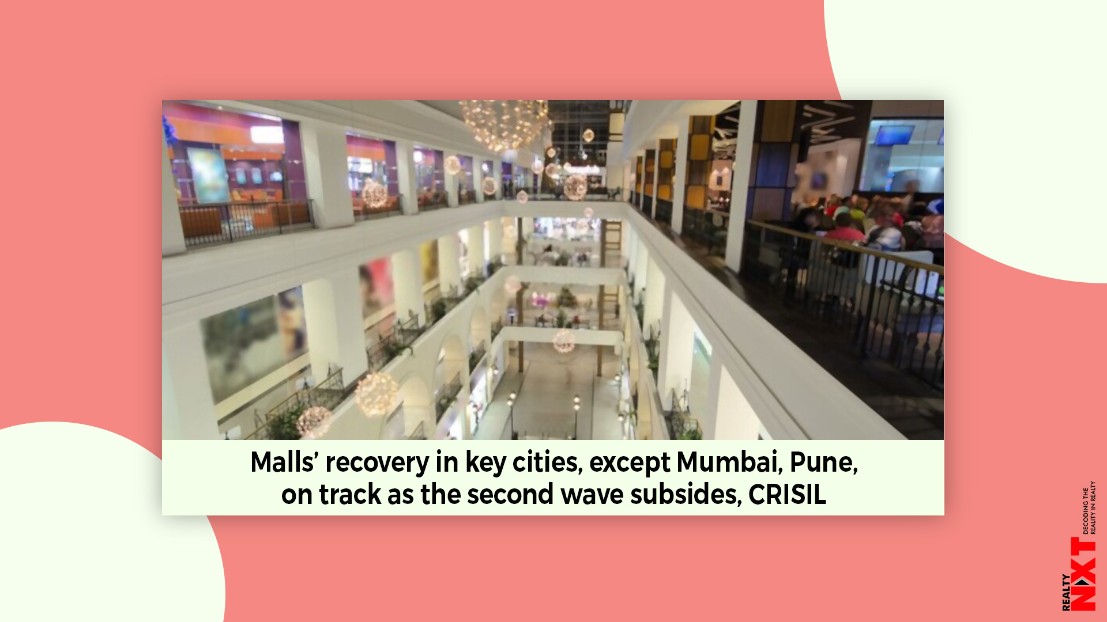 Rental revenue for mall owners is seen clawing back to 80-85% of pre-pandemic levels this fiscal, compared with 55-60% last fiscal. Also, while their liquidity may erode this fiscal as well, strong sponsor support and fund-raising initiatives will support credit profiles, an analysis of India’s top 14 malls1 rated by CRISIL Ratings shows.

Malls have been recovering faster after the second wave compared with the first wave supported by a rapid easing of restrictions and pent-up demand, Crisil Ratings said on Thursday.

With retail sales in malls rebounding strongly post reopening, pressure on rentals for mall owners is likely to be lower this fiscal, necessitating lesser waivers compared with last fiscal, it said.

Rental revenue for mall owners is seen clawing back to 80 to 85 percent of pre-pandemic levels this fiscal compared with 55 to 60 percent last fiscal. Also, while their liquidity may erode this fiscal as well, strong sponsor support and fund-raising initiatives will support credit profiles, an analysis of India’s top 14 malls rated by Crisil Ratings shows.

Anand Kulkarni, Director at Crisil Ratings, said malls in tier-I cities — except Mumbai and Pune — have reopened faster after the second wave.

The median closure period for the top eight cities was 7 to 8 weeks compared with 13 to 14 weeks during the first wave. “Further, retail sales in malls have already reached 55 to 60 percent of the pre-pandemic run rate in the first month after reopening — a level that took four to five months to reach after the first wave. Improving consumer sentiment driven by faster vaccinations, pent-up demand and discount sales by major retailers have contributed to the recovery,” he said.

An intense third wave leading to the closure of malls is a downside risk to these estimates. Retail sales and consequently rental revenue of mall owners could shrink up to 10 percent if the third wave impacts the festival season in the third quarter, which is generally the most productive period for malls.

Recovery for most tenant categories such as apparel, cosmetics, electronics, and luxury — which account for 75 to 80 percent of the revenue of mall owners — was more than 70 percent of the pre-pandemic level by the end of last fiscal. These categories should see faster recovery owing to pent-up demand which will reduce the burden on mall owners because of lesser rental waivers.

The cadence of recovery will vary for other segments which contribute to the balance revenues. Food and beverage, and cinema and family entertainment centres are expected to see only a gradual recovery. Revival in these segments is critical to boosting footfalls.

Such segments will also suffer from capacity loss due to shutdowns and may increasingly adopt a higher revenue share model for the most part of the current fiscal. This will moderately affect mall rentals till retail sales of the weaker segments significantly improve.

Crisil said the pace of recovery will be mixed across geographies too depending on the knock-on effect of the pandemic: malls in southern states and Maharashtra will take longer to recover compared with those in the north.

Net-net, while the rental income of mall owners is likely to be better than the last fiscal on the back of likely strong recovery in the second half, the complete recovery to pre-pandemic levels may happen only next fiscal.

While the performance of malls may remain subdued in the near term, investor confidence seems to have improved, as reflected in equity investments, funding for asset development, and outright asset purchases. This reinforces healthy long-term prospects with malls remaining the ‘go-to destination for entertainment, said Crisil.