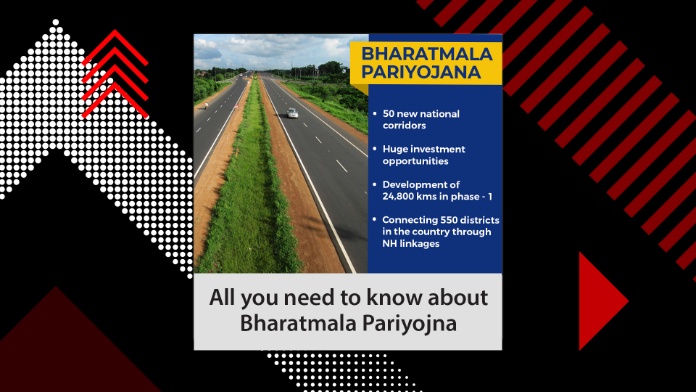 Any country’s development is directly or indirectly dependent on its transportation networks and how well they are maintained. The same may be said regarding India’s development as a large and populous country.

The emergence of new and developed roads is essential for linking the areas and maintaining a smooth flow of traffic. With the implementation of the Bharatmala project, the same is expected to be accomplished. A plethora of new roads will be built around the country as part of the plan.

The Indian Government has initiated the Bharatmala Pariyojna Project, a new highways framework initiative aimed at improving the efficiency of road traffic movement across the country by bridging crucial infrastructure gaps. The project, which spans 34800 kilometers of road, is expected to be implemented in stages.

Bharatmala Pariyojna Project: When Was It Officially Launched?

The national government started an ambitious highway expansion initiative – the Bharatmala project – in 2017 with the hope of optimizing connectivity, particularly along economic corridors, border regions, and far-flung districts.

19 August 2021: The 5.9-kilometer Dwarka Circle to Datta Mandir Chowk portion of the Nashik Road has been included in Phase 1 of the Bharatmala Pariyojna Project, according to road transport and highways minister Nitin Gadkari. Mr Gadkari claimed the decision would bring enormous comfort to everyday travellers between Nashik city and the Nashik Road train station, which are separated by a 7-kilometer stretch of the Nashik-Pune national highway.

A flyover will be built from Dwarka Circle to Datta Mandir Chowk by the Ministry of Road Transport and Highways to relieve traffic congestion on Nashik Road. Heavy vehicles can drive across the city using the flyover that connects the two points.

Chambal Expressway will be included in phase 1 of the Bharatmala Pariyojana: Nitin Gadkari

Phase 1 of the Bharatmala Pariyojna Project, Road Transport and Highways, includes the 404-kilometer Chambal Expressway, which runs through remote parts of Madhya Pradesh, Rajasthan, and Uttar Pradesh. Gadkari had asserted that the Rs 8,250-crore Chambal Expressway project in Madhya Pradesh, Rajasthan, and Uttar Pradesh may be a game-changer for the poor and tribals.

The inclusion of Madhya Pradesh’s ambitious Atal Progress-Way project in Bharat Mala Phase-I was approved by the Ministry of National Highways and Road Transport. The Atal Progress-Way would prove to be a lifeline for the Gwalior-Chambal division’s development. This 404-kilometer road will be surrounded by an industrial corridor. It will play a vital role in the region’s economic development.

This proposed highway will span across 404 kilometers through Madhya Pradesh, passing through the Chambal districts of Bhind, Morena, and Sheopur, and connecting Jhansi (Uttar Pradesh) to Kota (Rajasthan).

The development of a major new road connecting Jhansi (Uttar Pradesh) and Kota (Rajasthan) will help three Madhya Pradesh districts. In addition, the distance between these two places will be reduced by 50 kilometres. The trip time will be cut in half, from 11 to 6 hours. Also, industrial regions to be developed alongside the expressway.

In the Union Budget 2021, Finance Minister Nirmala Sitharaman announced numerous measures for the Infrastructure industry. Finance Minister Nirmala Sitharaman said the government has recommended a substantial increase in capital expenditure of Rs 5.54 lakh crore in 2022, up from Rs 4.39 lakh crore in 2021, as one of the actions taken to revitalize the infrastructure sector to pre-COVID levels.

Under the Bharatmala Pariyojna Project of Rs 5.35 lakh crore, almost 13,000 km of roads have been granted at a cost of Rs 3.3 lakh crores, of which 3,800 km have already been built. By March 2022, aim to construct another 8,500 kilometres and complete another 11,000 kilometres of the National Highway Corridor.

The Bharatmala Pariyojna Project project was announced in 2017 with a completion date of 2022. However, according to recent reports, the project is currently nowhere near completion due to rising land costs and an increase in the project’s planned budget.

The Central Government is now searching for additional investments from market funds as well as any other private investment. If the budget is not fulfilled, the government plans to auction completed roadway projects or look for foreign debt and bond markets.

By 2023, the Central Government expects to have completed delivering projects under Bharatmala, its major highways development programme.

Under the National Roads Development Programme, the first phase of the Bharatmala scheme, approved in 2017, entails the construction of 24,800 km of national highways and 10,000 km of balance road enhancements.