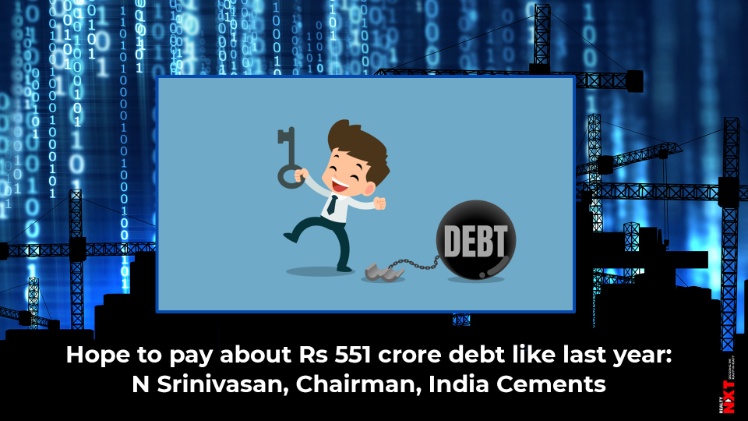 ​​”Last year, the company repaid Rs 551 crore debt, which is quite substantial. This year, it hopes to repay an equal amount depending on the impact of the Covid-19 pandemic,” he said while addressing shareholders at the 75th AGM held through virtual platform.

India Cements Ltd has said it hopes to pay similar levels of debt it had paid last year due to the impact of the Covid-19 pandemic.

The city-headquartered company repaid Rs 551 crore as debt in FY 2020-21, the vice-chairman of the firm N Srinivasan said on Wednesday.

“Last year, the company repaid Rs 551 crore debt, which is quite substantial. This year, it hopes to repay an equal amount depending on the impact of the Covid-19 pandemic,” he said while addressing shareholders at the 75th AGM held through virtual platform.

He said there were signs of the Covid-19 situation easing and the demand was picking up. But, he said, there was uncertainty over the possibility of the third wave of the virus. “Cement consumption is expected to go up with the Central government increasing the investment in infrastructure projects,” he said.

Citing reports of a normal monsoon this year, he said he hoped the farm sector and rural economy would do better thereby creating additional rural demand.

“With the relocation of workplaces and increasing work from home concept, there is an increased house-building and construction activity in urban and semi-urban centres,” he said.

On the performance of the company, he said it reported an impressive performance despite the onslaught of the second wave of the pandemic. The company operated 50 per cent of the facilities as against the 35 per cent in the first quarter of last year.

“Capacity utilisation in the second quarter was slightly better and was expected to improve,” he said. During the first quarter of this financial year due to the Covid-19 situation, the demand was low; the company keep its prices firm and followed the cash-and-carry policy.

To a query from a shareholder, he said the company would take up capacity expansion at the appropriate time. The company has plans for capacity debottle-necking in the plants in South and also set up a new plant in Madhya Pradesh, he said. The company board re-elected Srinivasan as vice-chairman and managing director for five years.