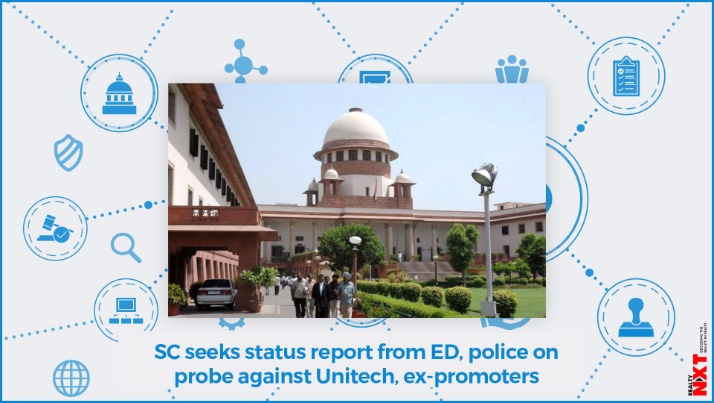 Both Sanjay and Ajay who are in jail since August 2017 are accused of allegedly siphoning home buyers’ money. The top court in its October 2017 order had asked them to deposit Rs 750 crore with the apex court registry by December 31, 2017.

The Supreme Court on Wednesday asked the Enforcement Directorate and Delhi Police to file status reports on their investigations into the affairs of realty firm Unitech Ltd as well as its former promoters and management officials before September 30.

A bench of Justices D Y Chandrachud and M R Shah directed that the status reports be filed by both the ED and Delhi Police in sealed cover giving the status of investigation before the next date of hearing on September 30.

During the hearing, Additional Solicitor General N Venkataraman, appearing for the new board of management of the Unitech Group, told the bench that two sub-committees have been constituted. One will hold negotiation with banks and the Asset Reconstruction Companies (ARCs), which have a charge of around 8,000 out of the 15,000 total flats for one-time settlement of the mutually agreed dues.

The second sub-committee will hold discussions with authorities like Noida, Greater Noida, and Town and Country Planning department of the Haryana Government on the claims and the settlement, he said.

Venkataraman said that negotiations will be held with Suraksha ARC, JM Financial ARC, and Edelweiss ARC.

The bench directed Suraksha ARC to hold discussions with the sub-committee about the settlement in two weeks and apprise the court about it.

Senior advocate Parag Tripathi, appearing for Suraksha ARC, assured the bench that it will hold the discussion with a positive mindset and apprise the court.

On August 26, the top court had directed that former Unitech promoters Sanjay Chandra and Ajay Chandra be shifted from Tihar Jail here to Mumbai’s Arthur Road Jail and Taloja prison in Maharashtra after the ED said they were conducting business from the premises in connivance with the staff.

Coming down heavily on the Tihar Jail officials, the top court had said that they are “absolutely shameless” for conniving with the Chandra brothers to flout the court orders and undermine its jurisdiction.

It had said that the two ED reports have raised some “serious and disturbing” issues for consideration and will be dealt with accordingly.

The top court had directed the Delhi Police Commissioner to personally hold inquiry forthwith about the conduct of Tihar Jail staff with regard to the Chandras and submit the report to the court within four weeks.

The ED had made a startling revelation that it has unearthed a “secret underground office” here which was being operated by erstwhile Unitech founder Ramesh Chandra and visited by his sons Sanjay and Ajay when on parole or bail.

The ED, which has been investigating money laundering charges against the Chandras’ and Unitech Ltd, said in its report that both Sanjay and Ajay have rendered the entire judicial custody meaningless as they have been freely communicating, instructing their officials and disposing of properties from inside the jail in connivance with the prison staff there.

Both Sanjay and Ajay who are in jail since August 2017 are accused of allegedly siphoning home buyers’ money.

The Chandras have claimed that they complied with the court’s conditions and deposited in excess of Rs 750 crore and therefore they are granted bail.

The matter pertains to a criminal case which started initially by one complaint lodged in 2015 and later joined by 173 other home buyers of Unitech projects’ — ‘Wild Flower Country’ and ‘Anthea Project’ — situated in Gurugram.

The top court had earlier allowed the new board of management to hold negotiations with three ARCs and noted that there are 74 (residential) and 10 (Commercial) under-construction projects wherein possession of about 15,000 units has to be delivered to home buyers.

The new board had said that the construction and completion of the unsold stock of about 4,000 units has to be taken up simultaneously and out of the total, 35 projects (comprising 5,918 sold units of which possession has to be given and another 2,090 unsold units) have been assigned to the ARCs.

In its resolution plan, the new board of management has said that construction of 15,000 units has to be done for delivery of possession to home buyers in three to four years and at current price levels, estimated cost of construction is Rs. 5,500-6,000 crores.

On January 20 last year, in a respite to over 15,000 hassled home buyers of Unitech, the top court had allowed the Centre to take total management control of the realty firm and appoint a new board of nominee directors.