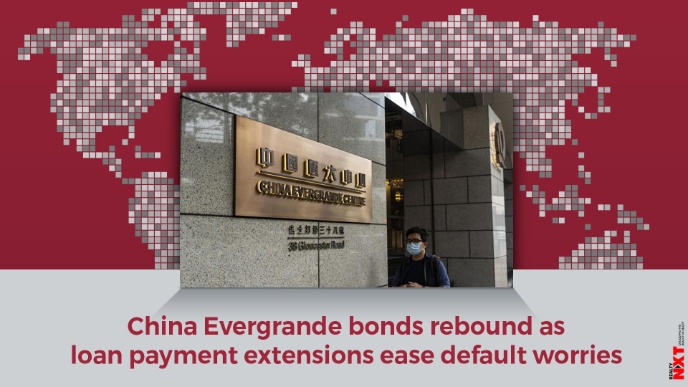 CITIC dispatched a small team to Shenzhen, where Evergrande is based, last week, but it is not optimistic that Evergrande’s liquidity will improve soon, the source added, citing difficulties in finding buyers for its assets and the country’s strict mortgage policies.

Bonds of heavily indebted developer China Evergrande Group staged a late rally on Thursday on news that some creditors had agreed to loan payment extensions.

One source told Reuters that Evergrande has requested an extension for at least three months on a trust loan interest payment to CITIC Trust, one of its major trust creditors, which was due in late August, citing tight liquidity.

CITIC has agreed to the extension, the source with direct knowledge of the matter said. The source added that similar delayed interest payments have been seen across the trust sector.

CITIC dispatched a small team to Shenzhen, where Evergrande is based, last week, but it is not optimistic that Evergrande’s liquidity will improve soon, the source added, citing difficulties in finding buyers for its assets and the country’s strict mortgage policies.

News of the extensions came after a report on Wednesday said Evergrande would suspend interest payments due on loans to two banks later this month, as well as payments to its wealth management products. That report triggered steep falls in the company’s onshore bonds and shares on Thursday.

Regulators have warned that Evergrande’s 1.97 trillion yuan ($304.7 billion) of liabilities could spark broader risks to China’s financial system if not stabilised.

They are now trading at roughly a third of their face value.

Evergrande’s dollar bonds due June 2025 dropped about half a cent to 24.709, but later turned more than two cents higher as reports emerged of the deadline extensions.

“It might end up being positive news as it might draw a line in the sand”, said Siddharth Dahiya, head of emerging markets corporate debt at Abrdn, formerly Standard Life Aberdeen plc.

“But we don’t know, there is very little clarity… The first reaction (from the markets) is positive though.”

Financial information provider REDD reported on Wednesday, citing sources briefed by banks, that Evergrande had told two banks it will suspend interest payments due on loans to the banks on Sept. 21, pending further instructions about an extension plan.

Evergrande has also delayed payments to several trust firms other than CITIC, REDD said, and it might suspend all payment on its wealth management products starting on Wednesday.

Recent days have seen a series of downgrades by rating agencies including Fitch, Moody’s and China Chengxin International (CCXI) – the last of which made its yuan bonds unusable as collateral for repo financing.

Fitch Ratings cut the ratings of Evergrande and two of its subsidiaries to “CC” on Wednesday, adding a default appears probable, due to tight liquidity, declining contracted sales, pressure to address delayed payments to suppliers and contractors, and limited progress on asset disposals.

Fitch estimated the company faces bond interest payments of $129 million in September alone and $850 million before the end of the year. Refinitiv data shows nearly $7.4 billion worth of onshore and offshore bonds coming due next year.

With around $20 billion worth of outstanding offshore bonds, Evergrande is one of the world’s largest emerging market corporate issuers.

Late last month, Evergrande warned of liquidity and default risks, and said it would adjust development timetables for projects, “vigorously” promote sales, renew or extend borrowings, dispose of equity interests and assets as well as introduce new investors to the group and its units to improve cashflow and reduce debt.