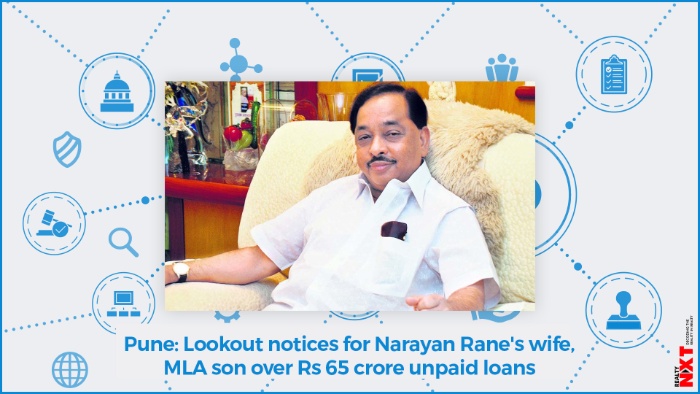 The LOCs have been authorised by three parties, including the Union Home Ministry, the lender, and the financial institution (Dewan Housing Finance Ltd), followed by a complaint by Maharashtra government on August 20.

In another embarrassment for Union MSME Minister Narayan Rane, the Pune police’s Crime Branch has issued ‘Lookout Circulars’ against his wife and legislator son in alleged loan default cases of over Rs 65 crore.

The LOCs have been authorised by three parties, including the Union Home Ministry, the lender, and the financial institution (Dewan Housing Finance Ltd), followed by a complaint by Maharashtra government on August 20.

However, there is no FIR, or any other court proceedings shown in the matter of issuing the LOCs against Rane’s wife, Nilam Narayan Rane and son and Bharatiya Janata Party MLA Nitesh Narayan Rane.

Referring to the NPA outstandings, the LOCs said: “In the aforesaid circumstances, there is an apprehension and fear that the said co-borrower may leave the country anytime with a malafide intention to evade repayment of the loan granted by DHFL and escape the legal actions that may be taken against (them) civil/criminal by the DHFL.”

It directed the Mumbai Airport authorities to open the LOCs, and whenever the co-borrowers are intercepted at the airport, their arrival/departure it should be intimated to the Pune police Crime Branch.

Both these loans accounts stand with the DHFL, Mumbai, but were subsequently classified as ‘non-performing assets’ (NPAs), as per the norms of the National Housing Bank and the Reserve Bank of India, say the police notices.

With the dues now standing at Rs 27,13,18,931 and Rs 34,09,61,771, respectively, the Pune Crime Branch has issued the LOCs against the mother-son duo, to the Assistant Director, Look Out Cell, at Chhatrapati Shivaji Maharaj International Airport (CSMIA).

Confirming to IANS that the circulars were issued on September 3, Deputy Commissioner of Police Shrinivas Ghadge, however, flatly declined further comments in the matter.

Flaying the developments, Nitesh Rane told media persons that since the loan accounts and the lenders are in Mumbai, how come the Pune police has stepped into the picture.

“Moreover, five months ago, we had agreed to settle the loans availed from the DHFL,” he added.

Later, he launched a direct attack on State Tourism Minister Aditya Thackeray demanding a LOC against him, triggering yet another political row between the BJP and Shiv Sena.

“Nandkishor Chaturvedi who is apparently missing for months now or rather absconding has been a partner with Min Aditya T. Shouldn’t Pune crime branch where this person is? A LOC should be issued here too so Aditya T doesn’t fly out of the country What’s the mystery??” he said in a tweet.

The two LOCs come barely 15 days after Narayan Rane “created history” on August 24 by becoming the first Union Minister from Maharashtra to be arrested by the state police, and getting sent to magisterial custody for 10 days but later securing conditional bail from the same court.

The arrest capped a massive political drama in the wake of “tight slap slur” against Chief Minister Uddhav Thackeray, which sparked a furore in Shiv Sena circles.