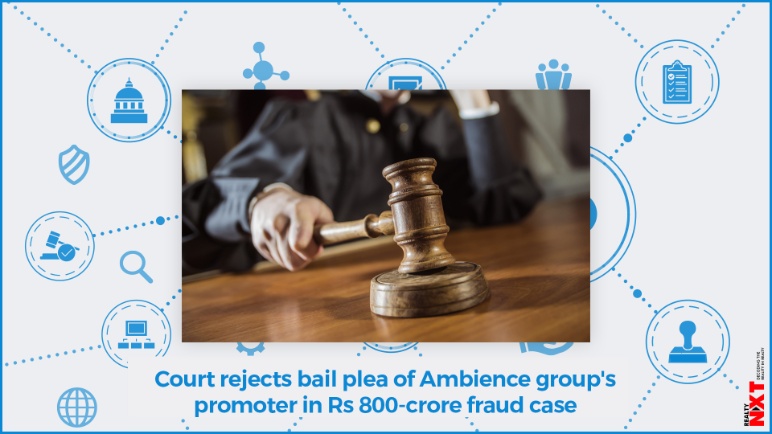 The Enforcement Directorate arrested Gehlot in July, in an alleged bank loan fraud case worth more than Rs 800 crore. He was arrested under PMLA for committing bank fraud against the Jammu and Kashmir Bank Consortium.

A Delhi court on Friday dismissed the bail plea of businessman Raj Singh Gehlot, the owner of Ambience Mall who was arrested in a money laundering case related to Rs 800 crore bank loan alleged fraud case.

The Enforcement Directorate arrested Gehlot in July, in an alleged bank loan fraud case worth more than Rs 800 crore. He was arrested under the Prevention of Money Laundering Act, 2002 (PMLA) for committing bank fraud against the Jammu and Kashmir Bank Consortium.

Additional Sessions Judge Dharmender Rana dismissed the bail plea and said, “considering the nature of allegations, intricate nature of the investigation and the possibility of the applicant/accused attempting to influence the course of the investigation, I am of the considered opinion that the instant bail application is bereft of any merits and the same is accordingly dismissed.”

“…the economic offences are required to be treated as a separate class and bail cannot be granted as a matter of routine…”, Court said.

Earlier, Court while granting custody to ED said, “Investigation of an offence under the Prevention of Money Laundering Act, (PMLA) in itself is an intricate exercise of skills and patience.

The very nature of the offence requires sustained interrogation and an intensive analysis of the copious material collected during the course of the investigation. Considering its intricate nature, Investigation under PMLA, for obvious reasons, is a time-consuming process.”

Enforcement Directorates through Advocate Atul Sharma and Advocate Naveen Kumar Matta submitted that his custodial interrogation was required to unearth the end-use of some portion of loan funds in order to ascertain the exact quantum of proceeds of crime for determining the role of various other persons and aides who have assisted in the sanction and diversion of loan funds and also to unearth the entire modus operandi involved in the present case.

Senior Advocate Vikas Pahwa appearing for Gehlot forcefully argued that the relevant information about the transactions concerning the loan and its utilization has been mischievously withheld by ED. It was also submitted that even prior to disbursal of the loan amount in question, construction was commenced with the funds of the promoters.

It was submitted that there is no siphoning or misappropriation of loan amount and the amount alleged to be siphoned off was in fact the money that was paid back by AHPL under the instructions of the turnkey contractor to the persons who supplied material and rendered services to AHPL before disbursal of the said loan.

Advocate Tanveer Ahmad Mir also represented businessman RajSingh Gehlot argued that the accused is an old and ailing man with firm roots in the society and he is neither a flight risk nor in a position to tamper with the evidence nor influences the witnesses and he deserves to be admitted on bail.

Last year, the ED had initiated an investigation under PMLA on the basis of an FIR registered by State ACB, Jammu against Aman Hospitality Pvt Ltd (AHPL) and its Directors for money laundering in the construction and development of the 5-star ‘Leela Ambience Convention Hotel’ situated near the Yamuna Sports Complex in Delhi, the investigation agency said.

It stated that investigation under PMLA revealed that a huge part of a loan amount of more than Rs 800 crore, which was sanctioned by a consortium of banks for the hotel project, was siphoned off by AHPL and Raj Singh Gehlot and his associates through a web of companies controlled by them.