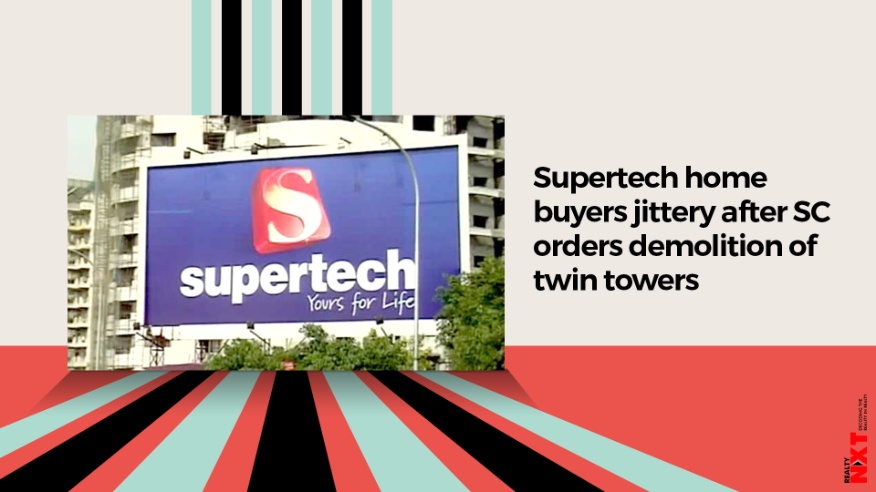 On August 31, the Supreme Court ordered demolition of the twin 40-storey towers of Supertech’s Emerald Court project in Noida here for violation of building by-laws.

Rashmi Bondre and her husband Manish Kumar had booked a flat in Supertech’s Eco Village I housing project at Greater Noida in April 2010 and were promised possession of their home by 2012.

They had hoped that even if the construction was delayed, they would move into their own home by 2013 and say goodbye to monthly rental accommodation.

Life seemed good for the newly-married couple but they did not get what they had wished for.

In 2021 now, the couple has two children, but the dream home that they had booked with Supertech is still in the making.

Like the despondent couple, there are many others awaiting their dream homes with the real estate developer having failed to hand over the flats despite crossing multiple deadlines.

On August 31, the Supreme Court ordered the demolition of the twin 40-storey towers of Supertech’s Emerald Court project in Noida here for a violation of building by-laws.

The apex court directed that the entire amount of home buyers be refunded with 12 per cent interest from the time of the booking and the Residents Welfare Association (RWA) be paid Rs 2 crore for the harassment caused due to the construction of the twin towers.

A bench of Justices D Y Chandrachud and M R Shah said the 2014 verdict of the Allahabad High Court, which directed demolition of the twin towers, does not deserve any interference.

The ruling has made home buyers, who have put in their hard-earned money in housing projects across the National Capital Region from Greater Noida to Gurgaon, jittery and dejected.

A day after the SC ruling, Supertech said the order “will not have any adverse impact” on the company or its group companies as “every project has its own independent” RERA Account and cost centre.

“Supertech is a financially stable and strong group. Work is going on at all our project sites as scheduled. We would like to reassure all our customers, bankers, vendors and other stakeholders that we will deliver all our projects in the scheduled time frame,” it said in a statement.

However, buyers are less than enthused with the developer’s assurance.

Rashmi Bondre said her tower is “almost ready with only a few works” while the no-objection certificate (NOC), as well as completion and occupancy certificates, are yet to be obtained from the local authority.

“But a few families, after waiting for 10-11 long years, have shifted into the incomplete tower,” she told PTI.

“As far as the Supreme Court decision is concerned about demolishing the twin towers, it is a possibility that the builder will file for bankruptcy or deliberately lose ongoing cases in the National Company Law Tribunal (NCLT). Also, there seem very less chances of existing projects getting completed,” she feared.

“The builder is already in a cash crunch. From where will the company derive funds for demolishing and refunding in the twin towers case? Obviously, in order to honour the Supreme Court decision, funds from existing projects will be diverted again,” Bondre said.

“It was our lifetime mistake to book a flat with Supertech,” she added.

Amit Singh, who had also booked a 3BHK apartment in the same Eco Village I project in 2010, said he was assured delivery of his flat in 2013 but the deadline was extended to 2015.

Today, after six years, he has still not got possession of his flat. As much as 95 per cent of the apartment’s cost has been paid to the developers, he claimed.

“The SC order will definitely impact my project. It’s going to hit Supertech’s finances. The builder may leave out projects, that hardly have any ongoing construction, incomplete,” the 36-year-old IT professional told PTI.

In Gurgaon, Lakshay Singh says he booked a flat in Supertech’s Hill Town on Sohna Road in October 2015, with what appeared to be a promising housing project at the time, and was told he could move in by October 2018.

Like several other pending projects, Lakshay says the construction is less than 30 per cent complete till August this year.

“I do not know about the technicalities but during the past three years of my dealings with Supertech staff, I have been told they have a financial crunch. There was no lockdown until 2020 March, or force majeure condition. They were already in a crunch situation and this (Supreme Court order) would add to it,” he told PTI.

Lakshay added that he has paid 90 per cent of the Rs 67 lakh for the 1,390 square feet apartment that was booked.

Peeved over the delay, some 80 to 100 home buyers in the project have moved the consumer court for complete refund from the builder, he added.

Home buyers have also questioned the role of banks and local authorities as they blamed them too for their plight.

In its August 31 order, the Supreme Court had underlined “collusion” of the builder and the local Noida Authority that led to the construction of the multi-storey twin towers in Noida’s Sector 93A.

Anuj Singh, who works in a private firm, had also booked a 2BHK apartment in Supertech’s Hill Town project, which has set him back under a monthly instalment of around Rs 50,000 against the home loan he has taken from the bank.

As the COVID-19 pandemic hit the economy last year, the 40-year-old from Haryana’s Hisar district decided to move back to his hometown with his family, citing lower cost of living as compared to Gurgaon, where he stayed on rent.

“I am a part of the Hill Town home buyers’ group where we talk about the project and share updates related to it. Mostly people in the group feel Supertech may go bankrupt now. They are no doubt in fear, although, some are hoping for a refund through legal cases,” he told PTI.

“Ours is a genuine concern because it is not like we have put in our money for investment. We want to live there but we have got our money stuck now,” he said about the project, some 15-20 km outside Gurgaon city.

Anuj said the bank where he took the home loan has also raised the interest rate from 9.5 per cent to 11.5 per cent.

When asked for a possible solution to the long-standing issue, Anuj said the home buyers are told to move into some of Supertech’s other projects that are ready but laments that those apartments cost double the amount.

“There are almost 90 per cent people like me, who just cannot do it. They are already burdened under loans, EMIs and monthly rentals. They just cannot afford it,” he added.