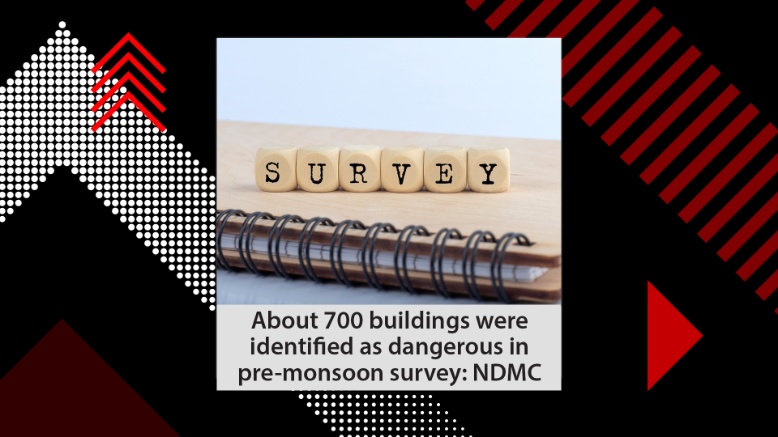 “During this survey, 699 properties or structures were found in a dangerous condition and 444 structures were identified as needing necessary repairs,” a senior NDMC official said.

About 700 buildings located in north Delhi were declared as dangerous structures in a pre-monsoon survey by the area’s civic body, senior officials said on Monday.

The safety of old houses and other structures has come into sharp focus as two boys, aged seven and 12, were killed after a four-story building collapsed in north Delhi’s Sabzi Mandi area.

The building, which collapsed on Monday, was located in front of old Robin Cinema, in Malka Ganj ward of Civil Lines Zone of the north corporation, and the whole neighbourhood has small, old buildings aged around 75 years, officials said.

A pre-monsoon survey was conducted across all six zones of the North Delhi Municipal Corporation in May-June to identify such structures and take remedial action.

“During this survey, 699 properties or structures were found in a dangerous condition and 444 structures were identified as needing necessary repairs,” a senior NDMC official said.

Out of these, 20 dangerous properties in the ward, nine properties are located on the same road i.e. Main Road, Old Subzi Mandi, where the collapse incident happened, the official said

However, this house was not identified as dangerous as it was apparently not found in a dangerous condition during the survey, the officials said.

All the zonal authorities of the NDMC have issued notices under section 348 of the Delhi Municipal Corporation Act, 1957 to owners of all the buildings, identified as dangerous, they said.

According to the norm, after a structure is declared dangerous or unsafe, but if it is repairable, then the owner is instructed to get it repaired. But if it is too dilapidated then the civic authorities demolish it for public safety.

North Delhi Municipal Commissioner Sanjay Goel, who visited the site of the collapse, said the building was about 78-years-old.

“Two children who died in the incident were passing by when the collapse happened. We will be probing the cause of the incident and take appropriate action as per its report,” he said.

“The area is very old, even Robin Cinema is an old structure, opposite which this building stood. Even traces of old tram lines can be seen in the area. There are hundreds of structures in the area, which are over 75-years-old,” Goel said.

Prakash said from outside this building did not seem that its structure was weak.

The municipal commissioner said it is possible “someone fiddled” with the structure on the ground floor to do some extra masonry work, which could have compromised the structural safety of the building.

“Rescue and relief operation is going on and debris is being removed. We are trying to find out what caused the collapse of the building,” he said earlier in the day.

Civil Lines area was established by the British in the early 20th century after the imperial capital was shifted from Calcutta to Delhi in 1912.

Recently, an old building in Delhi’s Narela area, which was declared a dangerous structure by civic authorities, had collapsed.

However, no one was injured in the incident.

“An old building has collapsed in Begumpura area of the NDMC’s Narela zone. The building had already been vacated of its occupants as it was declared a dangerous structure already. And, no one was injured in the mishap,” a senior NDMC official had said.

ALSO READ: ED Informs SC That It Has Attached Properties Worth Rs 4.79 Crore Of Ex-Amrapali Director