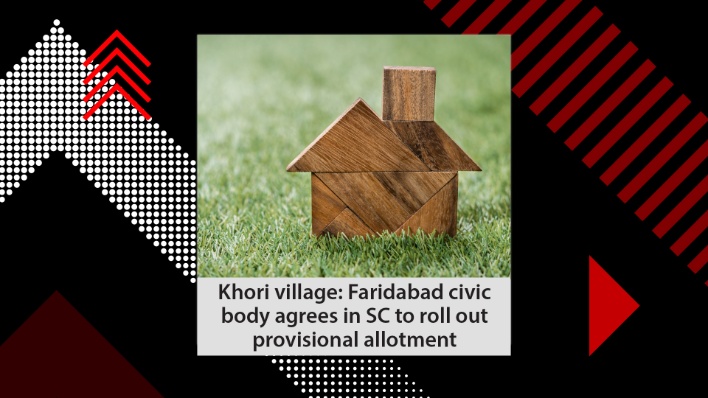 ​The corporation, which placed the time line for rehabilitation process, was told by the apex court that its proposed schedule indicating April 30 next year for handing over possession of EWS (Economically Weaker Section) flats to eligible applicants is “too long”.

The Faridabad municipal corporation “in-principle agreed” on Tuesday in the Supreme Court to roll out provisional allotment of houses for rehabilitation of eligible people, who were residing in Khori village where unauthorised structures which came under Aravali forest area were removed.

The corporation, which placed the time line for rehabilitation process, was told by the apex court that its proposed schedule indicating April 30 next year for handing over possession of EWS (Economically Weaker Section) flats to eligible applicants is “too long”.

A bench headed by Justice A M Khanwilkar told the civic body that upon receipt of applications duly accompanied by documents prime facie establishing eligibility for rehabilitation, the civic body shall issue provisional allotment within a week after due scrutiny and the letter shall indicate that it is only temporary and subject to verification and final draw of lot.

“The corporation shall, upon receipt of application duly accompanied by documents prime facie establishing eligibility for rehabilitation, issue provisional allotment to such applicants within one week from the receipt of application after due scrutiny,” said the bench, also comprising Justice Dinesh Maheshwari.

It said the applicant and his family members will give an undertaking in writing to the corporation that as and when called upon to vacate the premises, in the event of failing to establish the eligibility during the scrutiny or remedy of appeal against such decision, they would do so within two weeks from the receipt of the communication.

The bench noted that counsel appearing for the corporation has assured that after provisional allotment if any repair or maintenance is required to be made, the same shall be carried out preferably within 10 days from the intimation given to the concerned official.

It said while carrying out such maintenance works, all care and caution must be observed by the corporation and its officials regarding the safety of occupants in the premises under repair.

The bench noted the apprehensions raised by the advocates representing some of the petitioners, including those who were residing in the village, regarding the proposed schedule as per which applicants have to submit an application for allotment of EWS flats to the municipal corporation by October 15.

The counsel said time till October 15 would be a “short period” for complying with the necessary formalities while submitting applications for allotment of premises in terms of the rehabilitation scheme.

“It is open to the corporation to shift the cut-off date to November 15, 2021 as requested by the counsel appearing for the concerned persons,” the bench said, adding that correspondingly, the subsequent dates have to be re-aligned.

The bench said on taking possession of provisional accommodation, the rent/solatium of Rs 2,000 per month to be offered to the concerned eligible applicant from November 1 for six months or actual physical possession of flats, whichever is earlier, shall stand discontinued on a case-to-case basis.

The bench also dealt with the issue raised by senior advocate Sanjay Parikh, who was appearing for some of the petitioners, and said that persons have faced difficulties in accessing the corporation’s e-portal for submitting applications and documents.

The counsel appearing for the corporation said there may be some glitches in the portal but all care will be taken to set right the technical issues.

The bench said the concerned applicants are free to give hard copy of the applications/documents to the nodal officer to be notified by the corporation.

The court said it would consider the challenge to the relevant part of the rehabilitation scheme on September 20.

During the arguments, Additional Solicitor General Aishwarya Bhati, appearing for the corporation, referred to the affidavit filed by the civic body indicating the timeline for the rehabilitation process.

“The possession is April 2022. Why,” the bench asked, adding it had on the last hearing suggested about the provisional allotment.

“You are giving us a time schedule which is not consistent with what we had suggested,” the bench said.

Bhati told the court that the civic body will pay rent/solatium and the buildings need maintenance so that eligible persons can reside there.

The bench said it had suggested provisional allotment so that immediate concern can be redressed.

The bench also took exception to why the court was not informed that the commissioner of the corporation was changed.

“Why the commissioner was changed like this without our permission? Some work was going on,” the bench observed, adding, “What is happening to those farmhouses which are encroachments? Have you taken action on that.”

Senior advocate Arun Bhardwaj, who also appeared for the corporation, said some repair work is needed in the flats and a tender has already been floated in this regard.

On June 7, the top court had directed Haryana and Faridabad municipal corporation to remove “all encroachments”, consisting around 10,000 residential constructions, in Aravali forest area near the village, saying “land grabbers cannot take refuge of rule of law” and talk of “fairness”.

ALSO READ: DDA To Set Up Board Of Enquiry To Consider Objections, Suggestions On Delhi Master Plan