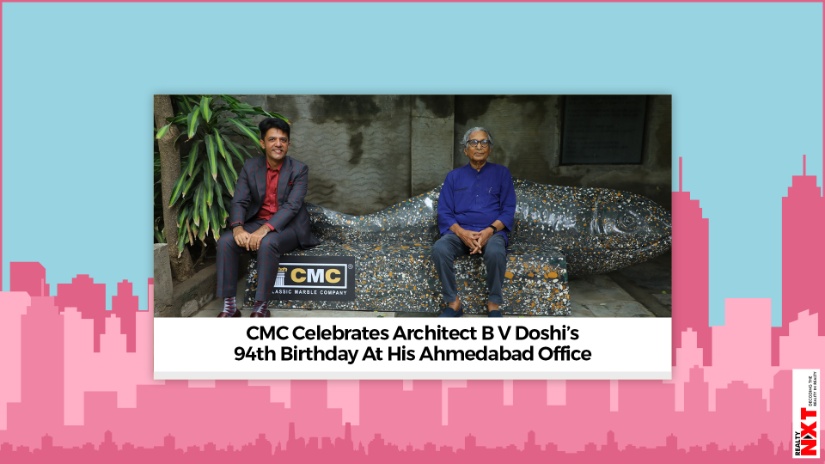 Felicitates Him With ‘Jalsha’ – A KalingaStone Marble Masterpiece Commissioned By CMC, Designed By The Virtuoso Himself

Padma Bhushan recipient and India’s first architect to have been awarded the Pritzker Architecture Prize, Shri B V Doshi celebrated his 94th birthday last month on the 26th.

The life-size sculpture depicting a whale breaking out of the ocean has been carved out of the company’s exquisite KalingaStone engineered marble, Royal Black Terrazzo.

The sculpture originally was commissioned by CMC last year and was designed by Shri B V Doshi himself. Jalsha is based on the concept of the ocean catching fire and it tries to capture the frenzy of all the sea’s creatures as the ocean rushes out of its own nether cavity to escape the scorching heat.

“Last year when Amit presented me with a 10ft X 4ft X 3ft block of Royal Black Terrazzo, I decided to let my imagination run wild. I have never thought of design as static, or stationary. Working on this sculpture took me back to my childhood, to the days when the poetry of Kabir transported me to an imaginary land. The sculpture is a tale of fluidity, motion, vivid imagination, and endless opportunity, of breaking our boundaries and thinking out of the box at all times. It is a privilege to receive one of my cherished designs as a birthday gift and I thank CMC and Amit for it,” says Ar. B.V. Doshi.

The nonagenarian is considered to be an important figure of Indian architecture and noted for his contributions to the evolution of architectural discourse in India. Having worked under Le Corbusier and Louis Kahn, he is a pioneer of modernist and brutalist architecture in India.

“Shri B.V. Doshi is not just a distinguished architect of our times but he is an inspiration to the profession of architecture itself. He is the first Indian architect to receive the prestigious Pritzker Architecture Prize and is also a recipient of the Padma Shri and the Padma Bhushan. His body of work continues to inspire a new generation of architects across the world and we are just glad to have had the honor of working with him. On his 94th birthday, we wish him good health and happiness,” concludes Mr. Amit Shah, Managing Director, CMC.