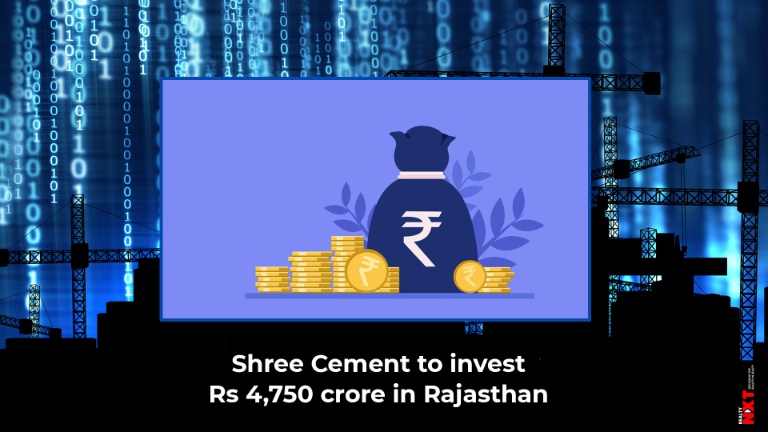 The company’s board on Tuesday approved to invest Rs 500 crore to set up solar power plants at its cement units at various locations and Rs 750 crore to set up a clinker grinding unit in the Purulia district of West Bengal by its wholly-owned subsidiary Shree Cement East.

Rajasthan-based Shree Cement will invest Rs 4,750 crore on three projects, including Rs 3,500 crore to set up an integrated cement plant at Nawalgarh Tehsil of the state.

The company’s board on Tuesday approved to invest Rs 500 crore to set up solar power plants at its cement units at various locations and Rs 750 crore to set up a clinker grinding unit in the Purulia district of West Bengal by its wholly-owned subsidiary Shree Cement East.

“The board of directors of the company has approved setting up of an integrated cement plant at village Gothra in Nawalgarh Tehsil of Rajasthan and solar power plants at various locations to meet the captive requirement of the cement plants of the company,” said Shree Cement in a regulatory filing.

The new proposed plant would have a clinker capacity of 3.8 million tonnes per annum (MTPA) and would be ready by the quarter ending March 2024, Shree Cement said in the regulatory filing.

The project requires an investment of about Rs 3,500 crore, it added.

Over the mode of financing, the company said it would be done through a mix of “internal accruals and debt”.

Besides, the board has also approved an additional investment of Rs 500 crore to set up solar power plants having a capacity of up to 106 megawatts (MW) to meet the captive power requirement of the company’s cement plants at various locations.

This project would be completed within the quarter ending September 2022, it added.

“The company has committed to maximising the use of clean energy into its operations. Setting up of the above solar power plants will enhance the proportion of clean energy usage in total energy consumption of the company,” it said.

It will reduce fossil fuel consumption and help in reducing the carbon footprint of the company, Shree Cement said.

In a separate filing, Shree Cement said, “The board of directors of Shree Cement East Private Limited (SCEPL), a wholly-owned subsidiary of the company, today (Tuesday) approved the proposal for setting up of a clinker grinding unit at village Digha and Parbatpur, in Purulia district of West Bengal.”

This will be financed mainly by way of equity contribution from Shree Cement Ltd.

“The cement demand-supply situation in West Bengal appears quite favourable and thus, investment in cement plant in the state would be a viable proposition,” it added.

Shree Cement has brands such as Roofon, Bangur Power, Shree Jung Rodhak, Bangur Cement and Rockstrong. The company is among one of India’s top-three cement producers with an installed cement production capacity of 43.4 million tonnes per annum (MTPA) and a power generation capacity of 752 megawatts, including renewable energy sources.

ALSO READ: Over 47,500 Houses In Delhi Meant For Slum-Dwellers To Be Used Under ARHCs Scheme